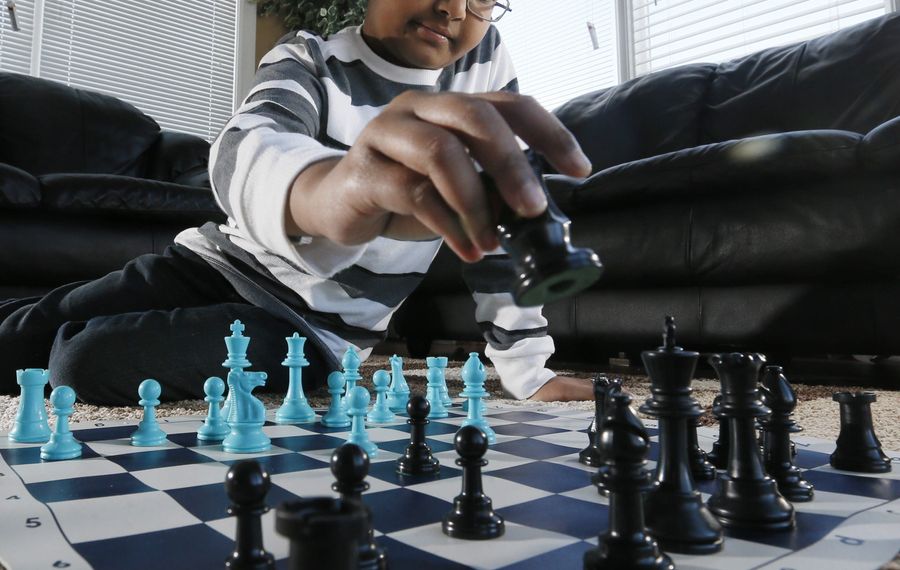 When 9-year-old Ashton William stands next to his first-place chess trophy at its place of honor in front of the fireplace, it comes up to his chest.

The outsized reward, which he received after beating 150 other kids from New York, Connecticut and New Jersey at the 48th Annual New York Chess Championship in Saratoga Springs on March 1, has elated Ashton.

“I felt that I did something great,” said Ashton, a fourth-grader at St. Gregory the Great School in Williamsville.

Ashton fell for chess in kindergarten, after he spotted chess lessons being given at the Audubon Library in Amherst.

“There were two opposite sides, and I thought it was like a battle,” he said.

His parents were eager to help from the start.

His father, Arun, had played the game as a boy in India, and Ashton’s mother, Fabiyola, had longed to learn.

At 5, Ashton became one of the youngest students of Chess Master Michael McDuffie, owner of Archangel 8 Chess Academy, who teaches the game at local libraries.

Ashton remembers those early lessons for how they would say, “gobble, gobble” whenever he captured a piece.

McDuffie sparked Ashton’s imagination by comparing the game set-up to a family house, with the king and queen pieces representing mom and dad and the two knight pieces as twin brothers.

In real life, the game became part of the family, drawing them all closer.

“I’m very happy about that. I think we all have a very good bond,” Fabiyola said. “It gives us a time to share things.”

As Ashton got better at the game, his father studied online and began coaching his son, urging him to triple-check each move. They play together a few times a week now and Ashton usually wins.

Ashton’s growing collection of trophies from regional tournaments line a shelf in the living room of the family’s Amherst home.

The state trophy was his 31st win and the most prestigious. At the Saratoga Hilton, Ashton played kids who are on school chess teams and who studied the game as thoughtfully as he does.

“They think more,” he said. “They come up with better plans.”

After winning six games, averaging an hour each, he won the state championship in a tie-breaker. He and a girl from Connecticut played a five-minute game, a quick kind of play that Ashton wasn’t used to.

“Five minutes is not my thing,” he said.

His parents waited outside – as all parents must during games – and, as usual, worried.

Ashton won the game quickly with a checkmate using his knights.

When he described how he did it, his mother cried with happiness. They had all worked hard practicing and traveling.

“We were waiting for this for four years," she said. “It was a long wait.”

While they talked last week, father and son played a quick game quietly, sitting on the floor, leaning pensively into the board.

Every so often, Ashton broke the silence to tease his father. His collection of captured pieces grew in a pile beside him.

His mother, watching from the couch, agreed.

“My husband is going to lose.”

Ashton laughed and gave his father a tip.

“If the queen captures the knight, it’s the only way to stop my move.”

His father took the advice and their game lasted a little longer.

“Checkmate,” Ashton said as he jumped up and lifted his arms in victory.

“And that’s how you beat regular, ordinary parents,” he said with a smile.