“In the summer, I’m at the Elmwood-Bidwell Farmers’ Market once a month as their nutritionist,” said Klem, director of Nutrition and Dietetics at Trocaire College, who is featured today in the In the Field story in WNY Refresh. “I answer questions and offer little food demos – ‘How do I use this, what do I do with it?’

“Education on food is sorely lacking. We know it’s important, but we don’t always know how to use it, how to store it, how to make it taste good so our 5-year-old kid and our husband and our family will eat it. We always start with these good intentions but sometimes it gets lost because it can be daunting.” 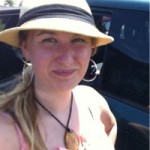 Klem believes in being able to shake the hand of the farmers who grow her food and raise the livestock she eats – and learn what she can for them about how that food is produced and best prepared.

She and and a growing number of other registered dietitians in variety of workplaces in the region are among culinary leaders looking for ways to make local foods more approachable and easier to prepare and enjoy, in all corners of greater Buffalo.

Klem pointed to the Massachusetts Avenue Project on the city’s West Side, and MAP’s mobile farm market, as one great example of that mission. She also said she’s excited about new efforts in Buffalo Public Schools to introduce more healthy, locally produced food in school meals.

“I grew into an interest of food and its sourcing, so early on I became a vegetarian,” Klem said, “learning more of where food came from, the politics of food and recognizing some of the industrial influence on our food system – and being aware of the fact that there’s more to the world of food than just the grocery store.

“I wanted to learn beyond that.”

That has meant learning to cook healthy, tasty dishes at home.

“I remember bringing roasted Brussels sprouts tossed with parmesan and toasted almonds and dried cranberries to Christmas a couple of years ago,” she said. “I finally turned my aunt, who has always been a little skeptical of these healthy green foods. She said, ‘This is really good. I can eat this. I would make this.’”

Klem, who has added locally sourced meats to her diet in recent years, grew up in Southern California before her parents, Laurie and Paul, both Western New York natives, moved the family back to the region when Klem was in ninth grade. Her father died in 2001, the year Klem graduated from Cheektowaga High School.

She traveled the world while in college at Hobart and William Smith in the Finger Lakes.

“That’s where I started to get my feet wet with wines and food pairings, and really started to expand a taste palate and recognition of flavors,” she said.

Klem lives in North Buffalo with her boyfriend of 2½ years, Mark Jowett, an English teacher at Clarence High School. She started leading her department last fall and looks to create a number of ways and events to make healthy food more accessible.

Meanwhile, I asked her to give shout outs to some of the local restaurants she believes are on board with local, healthy food principles. Here are those excerpts from our recent interview:

Q: How often do you dine out?

Twice a month. We just ate at Oshun and it was very good, but I want more from our restaurants. I want our restaurants to use our Western New York great agricultural bounty in ways that they’re not right now. I love a good culinary focus ... but I want good, rustic, healthy veggie, grain, meat simplicity.

Q: Do you have some examples of places that are doing it right?

I think Merge is doing well. They do some creative stuff and good sourcing. Remington Tavern over in North Tonawanda is doing some really nice stuff with seafood and local food. Craving, on Hertel, sources local and does an artisan, whole-food focus, although it can sometimes get a little couture. And I think Buffalo Proper is doing some pretty good stuff. There are a cadre of chefs who really are focused on what’s going on. It makes the consumer happy when you can say, ‘Here are the farms I support.’ When I want to take a field trip, I go down to East Aurora to Elm Street Bakery. They’re doing fermentation, local sourcing, bone broth – all the things I’m doing in my home kitchen – and they’re doing it just a teeny bit better. R.J. Marvin is doing their fermentation, so they have a Kimchi, fried rice, local egg brunch dish. I was blown away.