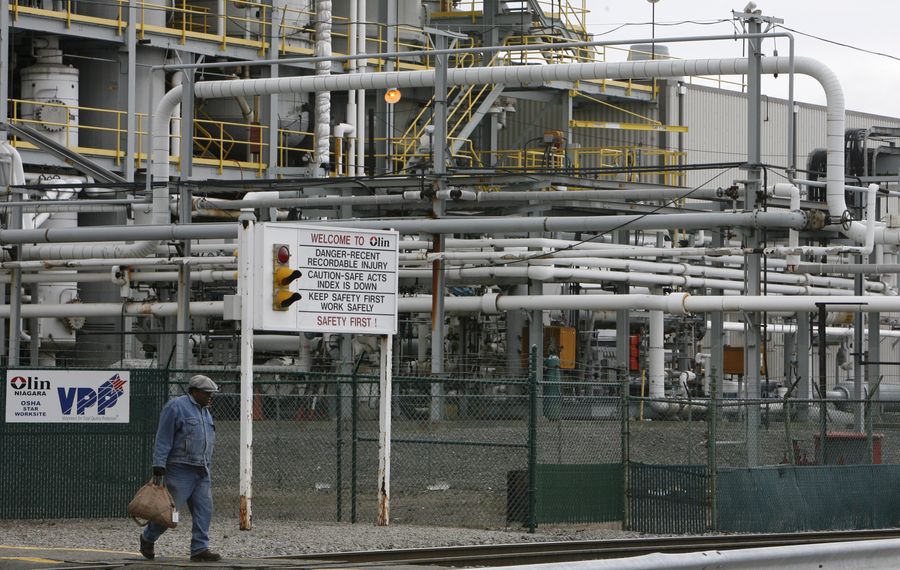 Dow Chemical Co. agreed to sell almost all of its chlorine business, the world’s largest, to Olin Corp. in a $5 billion deal as it pares less profitable products.

The transaction will leave Dow investors holding 50.5 percent of the enlarged Olin, while Olin shareholders will own the rest, the companies said Friday in a statement.

The move also means Dow Chairman and Chief Executive Officer Andrew Liveris is set to exceed his target of selling $7 billion to $8.5 billion of assets. The company is focusing on value-added products such as genetically modified corn seed and plastics for autos and packaging.

Dow was founded in 1897 as a producer of bleach, which is made from chlorine. Chlorine, in turn, is produced in tandem with caustic soda by running electricity through brine, the kind of cyclical, low-margin activity the company has sought to divest in recent years.

“This is Dow’s oldest business and our most commoditized business,” Dow Vice Chairman Jim Fitterling said Friday in a phone interview.

Olin is North America’s oldest maker of chlorine and had been investing in its core business as it looked for a way to become an industry leader, CEO Joseph Rupp said in an interview. It will issue $2 billion of debt to finance the merger.

The deal will triple Olin’s chlorine capacity to surpass Occidental Petroleum Corp., the world’s second-biggest producer, while its earnings before interest, taxes, depreciation and amortization jump to about $1 billion a year from $340 million. Olin expects at least $200 million in annual cost savings within three years of the deal closing.

Olin operates a chlor alkali plant on Buffalo Avenue in Niagara Falls, where it employs more than 200 people making chlorine, caustic sodium hydroxide, hydrogen, bleach and hydrochloric acid. The plant manager referred comment on the facility’s future to corporate officials, who could not be reached Friday.

Olin’s biggest business after chlorine is Winchester ammunition, which must be retained for at least two years because of the structure of the deal with Dow. Divesting the profitable business is unlikely to create value anyway, said Rupp, who will continue at Clayton, Missouri-based Olin along with the current management. Dow will get three directors on Olin’s board.

Dow announced its plan to separate the chlorine business in December 2013. The following month activist investor Dan Loeb disclosed his hedge fund Third Point LLC had taken a stake and called for a spinoff of Dow’s petrochemical business to improve profitability. Dow agreed in November to give Third Point two board seats.

The Olin deal shows how “Dow continues to serve as its own best activist,” Liveris said on a conference call Friday. Proceeds will allow Dow to accelerate its $5 billion share repurchase program and to pay down debt, he said.

The deal is expected to be completed by the end of the year, and will be structured as a tax-efficient Reverse Morris Trust. Dow will receive $2 billion of cash and cash equivalents and Olin common stock valued at $2.2 billion before Friday’s announcement. Olin also will assume about $800 million of pension and other liabilities.

Olin will get Dow’s chlor-alkali and vinyl assets on the U.S. Gulf Coast, including factories in Freeport, Texas, and Plaquemine, La., as well its global chlorinated organics business and the global epoxy business. The number of Olin’s chlorine and caustic soda products will rise to 18 from three.

Dow will become one of Olin’s largest U.S. chlorine customers, while it retains chlorine assets in Europe and Brazil.

In a separate transaction, Dow agreed to supply Olin with ethylene from the U.S. Gulf Coast for 20 years. Dow will get an upfront payment of about $400 million under that deal.