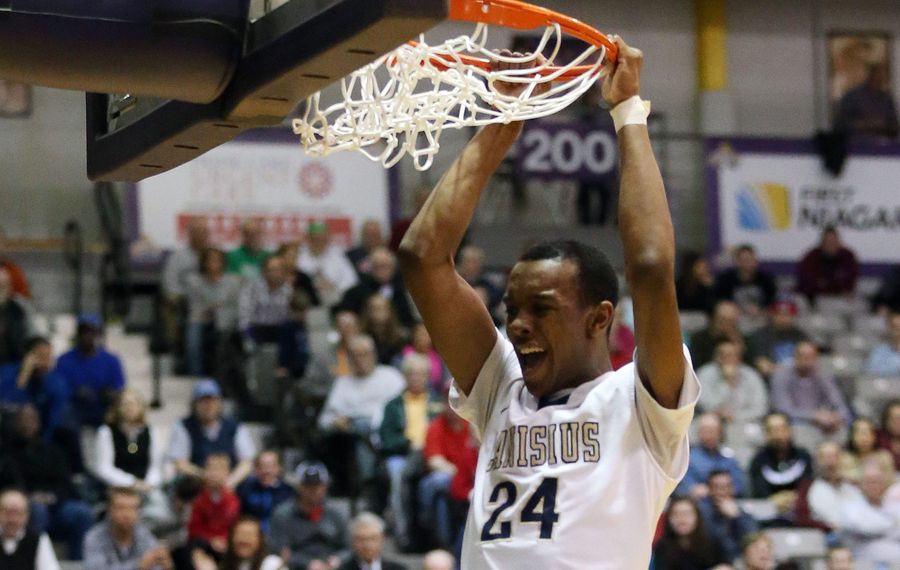 ALBANY – Canisius has played so many close games this season that its players aren’t fazed by anything.

That’s a good thing because the Crusaders had a lot thrown their way that could’ve derailed their championship dream Friday morning. But it’s because of that collective toughness that Canisius survived its biggest game of the season and earned a chance to play in the biggest game in school history.

The Crusaders (24-5) advanced to the Federation Tournament of Champions Class A final by taking down defending champion and previously unbeaten Scotia-Glenville of Section II, 68-63, in overtime before a mostly pro-Scotia crowd at University at Albany’s SEFCU Arena. They’ll play for the overall class crown at 5 p.m. Saturday.

An estimated 1,000 fans, including the Tartans’ student section, watched as Canisius scored seven points in the final 57 seconds to snap Scotia’s 53-game winning streak. Stafford Trueheart’s three-point play gave the Crusaders the lead for good, while seniors Josh Huffman and LaTerrance Reed each went 2 for 2 from the line in the closing seconds. The defeat was the Tartans’ first since March 9, 2013 when they lost in regionals to Section III champion Bishop Ludden.

“We worked hard all year in order to play for this title,” said Reed, who scored 19 points on 7-of-10 shooting while dealing with early foul trouble. “That’s a great team we played. Anybody could’ve won that. That game came down to toughness and we were the tougher team.”

Coach Kyle Husband said it would take a team effort to take down a team that’s won as often as Scotia (26-1). He got just that, and more drama than he could have possibly imagined.

Canisius survived the early loss of Reed, who picked up three first-quarter fouls. It found a way to win after junior Justin Jones fouled out late in the fourth quarter. It found a way to slow down Scotia star and future Albany Great Dane Joe Cremo, who forced overtime by canning two free throws with three-tenths of a second left.

Luckily for Canisius, the referee said Cremo wasn’t in the act of shooting when Huffman’s hand and Cremo’s head bumped. Otherwise he would’ve had three free-throw attempts to win instead of the one-and-bonus to try to tie it.

“I’ve been playing basketball for a long time and I’ve never seen anything like that,” Husband said of the late-game call. “Obviously it was a tough way to end regulation, but our guys came to the bench and knew they had four more minutes to make a statement.”

The call came just when it seemed Canisius had pulled off the upset in regulation. Cremo drove with his team down one in the closing seconds, but his shot was swatted away by Trueheart, who was fouled with 2.6 seconds left. He made the first but missed the second free throw, setting up chaotic finish.

“I guess they just did it for the fans,” said Reed of the controversial finish. “They wanted four more minutes, and we gave them a good four more good minutes and came out with the ‘W.’ ”

The Crusaders scored the first three points of overtime. Scotia, the two-time state public school champion, took a 63-61 lead on a three-pointer by Cremo with 1:07 left. That came after Canisius’ defense blocked two shots On the next trip down the floor, Trueheart scored on a hook shot and drew a foul that he converted into a traditional three-point play.

Trueheart eclipsed 1,000 career points, finishing with 19 to share team honors with Reed. Huffman had 16 points while TJ Wheatley provided tough defense off the bench in key stretches against Cremo, who scored a game-high 28 points but shot 6 for 18 from the floor.

“We just kept leaning on that whole group, all eight guys that played,” Husband said. “All 11 guys on that bench brought great energy, and they won that game together.”

Canisius led, 17-11, after one quarter but the Tartans took advantage of Reed’s absence in the second quarter and led, 29-26.

The Crusaders rebounded with their normal starting five out to open the third quarter. Reed had seven points during a 9-0 blitz that saw Canisius move ahead, 35-31. Reed scored 12 points in the quarter before picking up his fourth foul, but his contributions gave the Crusaders a 44-39 edge entering the final quarter.

The last time Canisius played in a Federation final, it lost in Class C to the former Buffalo Traditional in 2001 during Husband’s playing days.

Nichols is the last local boys team to win a Federation title, taking the Class A crown in 2010. Niagara Falls won the Class AA championship in 2005.

“To get here and be in this arena for the game tomorrow is incredibly satisfying and incredibly exciting,” Husband said.