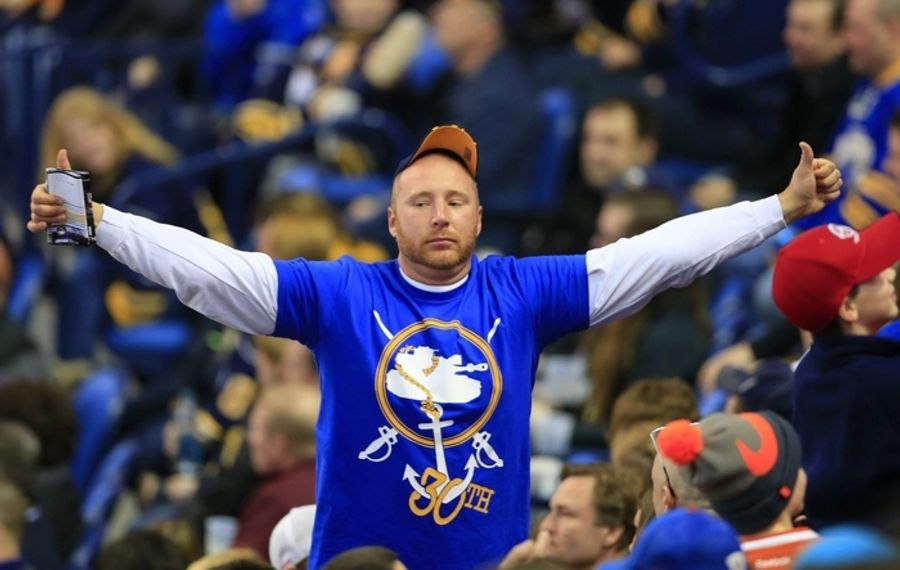 No matter how you feel about the tanking issue, most can agree on this much after watching the Sabres labor through 74 games in a miserable season: Winning unites people, losing divides them and the season needs to end.

Mike Weber made that abundantly clear after the Sabres’ 4-3 overtime loss to the Coyotes before a conflicted First Niagara Center crowd that erupted when Sam Gagner scored the winner for Arizona. The fans are tired of watching the Sabres flounder, and the Sabres are growing tired of listening to them.

“They cheer when they score to win the game,” Weber said. “I don’t know. I don’t even know what to say. This is extremely frustrating for us.”

For months, frustration has mounted over the tanking issue. People have been at each other’s throats across Western New York over whether the Sabres have been taking the proper course of action. It morphed into arguments over individual character, a debate over ethics and whether losing as a strategy violates the spirit of sports.

The subject has been beaten to a pulp by your friends and family members, your coworkers and neighbors, parents and children, and the media. There has been no middle ground, no negotiation and no relief. To think so much energy has been spent on a team that will finish the season with no playoffs.

All this while the Sabres long to select Connor McDavid with the first pick overall or Jack Eichel with the second. Tank Nation drew closer to their wish when Gagner slapped home the winner 56 seconds into OT. The Sabres are six points from 29th place with eight games left and are virtually guaranteed to get a teenage phenomenon.

For a while, it was difficult to decipher where fans stood based on their responses Thursday in this Tankee Doodle Dandy. Overall, they cheered louder for Buffalo than Arizona, but there was no ignoring the support for the Coyotes and, by extension, the humiliation and anger for players who felt betrayed.

Twenty years ago, finishing last was an embarrassment in Buffalo. These days, sadly, it’s being sold as an achievement. In all cases, it’s a matter of perception. And that’s been the case all season.

Tim Murray and Ted Nolan have been in terrible predicaments. Murray has accepted losing, if not encouraged losing, because he believes it will accelerate his massive rebuilding project. Nolan and his players are doing everything they can to win, knowing it’s counterproductive to Murray’s master plan.

Murray deserves blame, but so does the NHL. The rules in place reward poor teams by improving their draft positions. In a perfect world, the 17th place team would get the first pick. It would stop this nonsense. But when rules were drawn up, league officials didn’t expect teams to out-tank one another.

Not that it matters to pro-tank, McEichel-obsessed fans, but several players were insulted Thursday. Weber wasn’t alone. He just had the spine to speak up. It starts at the top of the organization and trickles to the people in the seats. In between, there’s an obvious disconnect. It’s a product of losing.

“You have to be a little bit disappointed as a player,” Nolan said. “They come here, and they perform, and they work. I could see sometimes when you get booed when you don’t give an effort. Tonight wasn’t one of those nights.”

When does it end? Do outfits such as the Sabres, Coyotes and Leafs shoot for the bottom and increase their drafts odds again next year if they’re in similar positions? If not, why not? If not them, why not another team?

I’m not looking to change anyone’s mind. People long ago became entrenched in their positions, which is usually the case when it comes down to principle. The controversy has taken the life of a heated political debate. We could argue until our skin turns blue, but nobody is budging.

For me, it has always been simple. Every team in every league in every game should be doing whatever it can to win every day. That’s what sports are about. It doesn’t matter whether it’s the first game or the last. If there’s a scoreboard involved, the objective is winning. That goes for management, coaches and players.

What amazes me, perhaps more than anything, is how many people suggested through social media and beyond that I don’t understand the opposite position. The basic question, after outlining the merits of McEichel, usually ends with something along these lines: “Dude, don’t you get it?”

I’ve been covering the NHL for nearly 25 years. Trust me, I get it.

Unfortunately, too many people fail to get IT. They don’t understand or choose to ignore the fundamental idea that competition calls for providing the maximum effort needed to win. It’s not selective. It’s not sometimes. It’s always. Anything less is unacceptable, unprofessional and unfathomable. If that needs further explanation, heaven help you.

To me, there’s a name for people who embrace losing under any circumstances: “losers.” The Bills and Sabres have lost so much over the past generation that fans have accepted losing as winning. I never expected to see the day when Buffalo fans would cheer for the other team and compromise their values.

The only people who deserve sympathy in this debate are McDavid and Eichel, the two superstars in waiting. The Sabres have spent an entire season angling for one of them with the future success of the organization at stake. There will be immense pressure on one of them to turn around a sorry franchise.

It’s a heavy burden for one player, any player, especially a young player. If he wins, people will eventually forget the two seasons spent on getting him. If he falls short and the Sabres lose, you will see a community divided again. It’s why the season, and therefore the losing, needs to end.