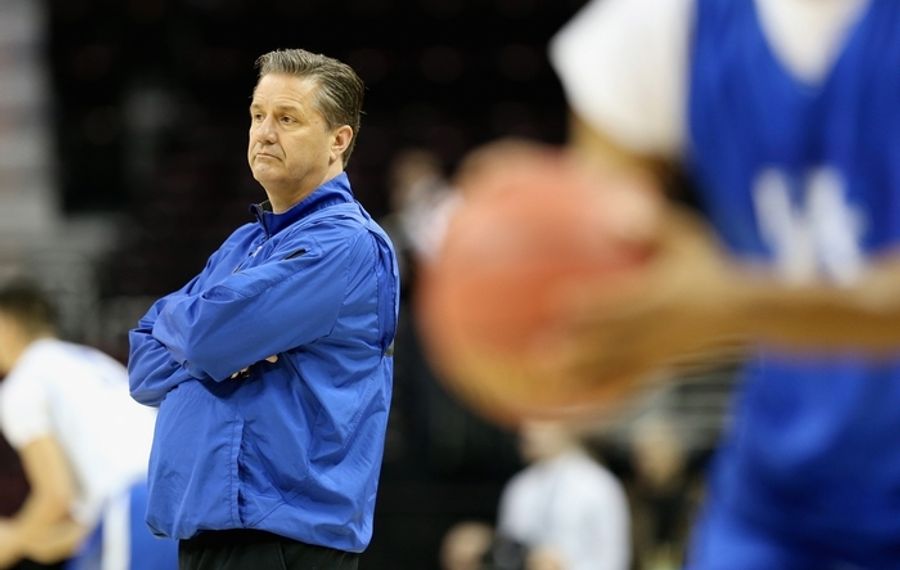 CLEVELAND – John Calipari remembered the days when he and Bob Huggins were the young bucks in coaching. Where did all the time go, Calipari asked? Huggins, who at 61 is five years older than his old friend, didn’t seem to remember much at all Wednesday.

Someone asked “Hug” about a book he wrote years ago called “Press Breakers.” Huggins said he honestly didn’t remember what he wrote in the book. He said he must have been bored when he wrote it. He also struggled to remember any really good Calipari stories.

But there’s one story Huggins has told so many times that it has become second nature. Come on, someone said, tell us the heart attack story.

“Do I have to?” he said, giving that famously dour expression of his.

“I would love it if you could,” a reporter said.

So Hug launched into it. It was 2002, at the Pittsburgh airport. Huggins was returning a rental car, listening to a female agent arguing with someone on a cellphone, when he began sweating profusely.

“I started getting short of breath,” Huggins said, “so I thought I better get to the airport. I made it as far as the sidewalk and I passed out. To make a long story short, they scooped me up and put me in the ambulance. I’m in and out of consciousness and they’re pumping morphine in me.

So the emergency tech radios the driver and asks how far to the hospital. The driver says 22 minutes. Huggins tells the guy he won’t last 22 minutes. The tech hollers. “Abort, abort, abort,” and they redirect the ambulance to a closer hospital.

“When I came to in the hospital, I was fairly coherent,” Huggins said. “He said, ‘Coach, I can’t let you die. I’m John Calipari’s cousin, and you can’t die until he beats you at least once.’ ”

At the time, Huggins and Calipari had met five times and Huggins had won all five. Huggins was late in his career at Cincinnati, Calipari early in his tenure at Memphis, back when both schools played in Conference USA.

Calipari finally beat Huggins the following year, no doubt bringing great joy to his cousin. But Huggins got him back three more times, including West Virginia’s upset of a top-seeded Kentucky team with John Wall and DeMarcus Cousins in the 2010 regional finals.

So that’s the side story of tonight’s Midwest Region semifinal at Quicken Loans Arena. Calipari has his mighty Kentucky team at 36-0, heavily favored to win the national championship and become the first unbeaten team since Indiana in the 1975-76 season.

His old friend, Huggins, is standing in his way with a tough, unyielding West Virginia team that reflects his own personality, a team with statistics that defy belief, a bunch of bad shooters who press and force the most turnovers in the nation to compensate.

The Mountaineers shoot 41 percent. I can’t recall a Sweet 16 team that shot 41 percent. Their opponents shoot 47 percent, which ranks 324th in the land. This doesn’t make sense, until you see that Huggins’ team has forced 228 more turnovers than it commits and gotten off 500 more shots than its opponents.

Kentucky, which is being compared with the greatest defensive teams in history, should not be sweating this one. But there’s a singular genius to this Huggins team. Oh, and let’s not forget that he’s 8-2 in his career against Calipari.

Huggins has 693 career wins in Division I. Calipari has 633 in just 23 years. They go way back, friends from the same region of America – Huggins from Morgantown, West Virginia, Calipari from western Pennsylvania. Now they meet for the third time in six years in the NCAA Tournament.

Calipari remembers watching Huggins play in college. He knew kids who played with him in high school and idolized him. They came up through the coaching ranks together. He understands Huggins and vice versa.

And while both will downplay Huggins’ record against Cal, much of it built before Calipari became the dominant head man in the sport, it is still there.

“Whether I was 12-0 against a coach, it doesn’t matter,” Calipari said. “This is a one-game shot. We had teams building, competing. They were great games. I don’t remember any of them being blowouts. I remember I had Derek Kellogg as my point guard (at UMass). He had Nick Van Exel, who went for about 38, and after the game it’s ‘What was I thinking?’ ”

Ah, yes. Let’s not forget there was a time when Hug had the better players, the all-America types. Tonight, it’s Calipari who has a roster so loaded with potential pros that he has to find minutes to keep everyone happy – and does a marvelous job of it.

“People think it’s easy when you have all those players,” Huggins said. “It’s hard, because you have a bunch of guys who think they could take over a game, and you have to get them to play together. What John has done with them defensively is terrific.” Yeah, it was a coaching lovefest Wednesday, a mutual admiration society. Calipari said it’s “incredible” what Huggins has done with the Mountaineers.

“Bobby is doing things this year that I’ve not seen him do,” Calipari said, “and that tells you the kind of coach he is. He looked at his team and said, ‘Hey, we’re going to play a little different.’ ”

“They’re creating havoc,” he said. “They’re taking you out of your offense, they’re creating opportunities for tough shots or turnovers. They’re playing very physical, they’re coming in and letting you know it’s going to be body-to-body, and you had better be ready.”

Huggins said he adopted the style because he was sick of losing. He’s in tough now, though, because Kentucky has the sort of defense that could make his Mountaineers look silly on offense, and a bunch of tall, quick athletes who might shred his vaunted press.

That doesn’t mean Calipari isn’t worried. Maybe he’ll unearth a copy of that “Press Breakers” book that Huggins wrote in his youth, to see if he can find any secrets to dealing with his friend’s pressure D.