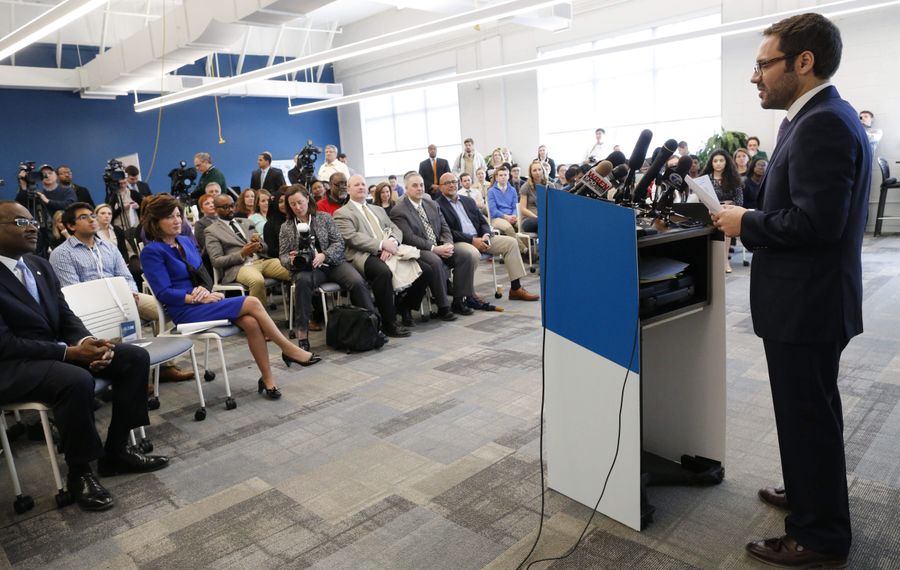 After attracting nearly 7,000 entrants in its first year, the organizers of the 43North business-plan contest are looking to broaden the competition in Year 2.

While the overall prize structure will remain the same, with 11 winners sharing $5 million in prizes, including a $1 million grand prize, organizers said Wednesday they want to broaden the competition by adding programs to encourage students in grades 6 to 12 to become entrepreneurs and trying to attract more qualified women and minority applicants.

“We had a tremendous first year,” said John T. Gavigan, who took over in February as 43North’s executive director, replacing Andrew J. Pulkrabek, who resigned and returned to his home state of Minnesota to run his own business aimed at assisting entrepreneurs.

“Last year, we were an idea. This year, we’re reality,” he said. “Like all startups, we are on a journey of continuous improvement.”

The 11 winners who were announced at an award ceremony in late October all moved to Buffalo in January and have been operating out of new space in the Thomas R. Beecher Innovation Center at 640 Ellicott St. The winners, who share space with other fledgling businesses located in the “dig” co-working facility, are required to remain in Buffalo for at least one year.

Most already have been accepted into the Start-Up NY program, which allows new and expanding businesses with ties to the state’s colleges and universities to operate virtually tax-free for up to 10 years. 43North also is organizing a wide range of mentoring and educational programs for the winners.

“We’re investing in intellectual capital ... and giving five million reasons to come to Buffalo and make their dreams come true,” said John R. Koelmel, the chairman of the New York Power Authority, which is providing $6 million of the $7 million in funding for the contest this year.

This year’s contest will follow the same basic format as the inaugural competition. One entrepreneur will win the $1 million grand prize, six winners will receive $500,000 apiece, while four others will get $250,000.

Organizers once again plan to promote the competition through a vigorous campaign on social media, combined with presentations by 43North officials at selected sites throughout the country and around the globe. The deadline for initial entries, available at www.43north.org, is June 24.

The pool of qualified entrants then will be reviewed by panels of local judges and narrowed down in late summer to somewhere around 100 semi-finalists, who then will make a more detailed presentation to other judging panels. From there, the judges will select the 11 finalists who will be guaranteed a prize during the contest’s finals in October.

Organizers are planning to add a new program aimed at student entrepreneurs, although the final details still are being developed and must be approved by the contest’s board of directors, Gavigan said.

Organizers also are hoping to attract more qualified women and minority entrants by increasing their outreach efforts, both in 43North’s social media campaign and through its road show. Those efforts also will be incorporated into the contest’s judging process, Gavigan said.

43North also is focusing more on fundraising, with a goal of developing funding sources that will help the competition become more self-sustaining. It now relies almost entirely on state funding through the Buffalo Billion program.