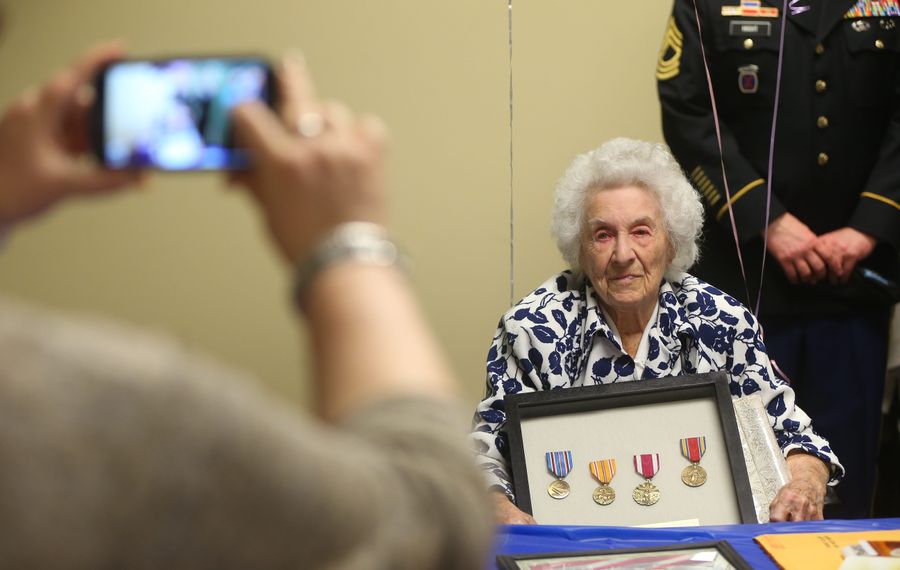 Phyllis Josephine Thompson’s story started 109 years ago, when she was born in England.

Her amazing life took her to Hampton Bay on Long Island as a child, nursing school in Brooklyn and halfway around the world during World War II to find her husband, whose ship was sunk by a German submarine.

She nursed soldiers who had been wounded on Iwo Jima during the brutal and bloody battle to capture the island, and eventually settled in Hamburg.

Jo, as she likes to be called, also is one of the oldest, if not the oldest, World War II veteran, male or female, in the country.

Her friends celebrated her birthday Wednesday with a small party at Father Baker Manor, where she has been living since she suffered a broken hip on her birthday last year.

“Someone has gone to a lot of trouble,” she said as her friend Karen Best pushed her wheelchair into a conference room and she looked at the balloons and flowers. “I really appreciate it.”

Thompson became a registered nurse after studying at Carson Peck Memorial Hospital in Brooklyn. She and her husband, William L. “Billy” Bunker Jr., who was from a wealthy family that owned a large shipping company, were married in 1930 before a justice of the peace and settled in Brooklyn. Bunker joined the Navy in 1940, and was chief engineer on the USS Cythera, a patrol vessel.

The Cythera was on its way to a mission in Hawaii when a German sub 100 miles off Cape Fear, N.C., launched a torpedo shortly after midnight May 2, 1942. All but two of the 71 crew members were lost at sea. The Navy told the families of all the crew that they were missing in action.

Hoping that Bunker was a prisoner of war, Thompson was determined to find him, and she enlisted in the Army in June 1943. The new lieutenant was stationed stateside, but was anxious to be closer to Germany, where she hoped her husband was being held. She ended up traveling to Seattle and then to Hawaii and Saipan by ship.

She and other nurses flew to Iwo Jima in May 1945, three months after the Marines first invaded the 4-mile-long island south of Tokyo.

Thompson was put in charge of the orthopedic surgery unit, which started out as a tent with volcanic ash floors. The hospital units eventually were replaced with Quonset huts. While the fighting had died down, there was occasional bombing of the island, according to a memoir she wrote. She and other nurses would stay in the unit during bombings, covering the wounded with mattresses.

She was still on Iwo Jima when she learned that her husband, Billy, had been killed when his ship sank three years earlier.

She returned to the States in the fall of 1945 and was stationed at Valley Forge Hospital in Pennsylvania, where she met her second husband, Robert Thompson. They married in 1949 and moved to Erie County, where she opened an antique store in Boston. The couple eventually moved to Hamburg, where he was an insurance agent and she ran the Old Cider Mill Antique Shop.

A far as her friends know, she never worked as a nurse again.

Thompson, who takes no daily medications and is quite hard of hearing, has not forgotten her experiences during World War II.

Wednesday, she was grateful for the party and gifts, which included lots of her favorite: chocolate. She also received a black and white photo of her late husband, Bob Thompson, with his two malamutes and their sled at Chestnut Ridge Park. He raised the dogs, and the couple used to take people for sled rides. She remarked on her husband, and came up with the name of one of the dogs: Vixen.

“It has broken the day considerably,” she said of the celebration. “I never thought I would live so long. All my family is gone.”

Those gathered for her birthday said they believe Thompson is the oldest World War II veteran in the United States. They noted that she is a month and a half older than a Texas woman who was believed to be the oldest female American veteran. That woman, Lucy Coffey, died last week.

Thompson, who attributes her longevity to a daily dose of cod liver oil, didn’t seem concerned with being the oldest.

Sitting in her wheelchair with a blanket over her legs Wednesday, she was impressed with letters of congratulation and proclamations from President Obama and first lady Michelle Obama, U.S. Sen. Kirsten E. Gillibrand, State Sen. Marc C. Panepinto and Hamburg Town Clerk Catherine A. Rybczynski.

“A senator?” she said in amazement.

Army Master Sgt. William Hight, senior military instructor in the ROTC program at Canisius College, and ROTC Cadet Kyle Zifchock, a student at the University at Buffalo, knelt and thanked Thompson for her service to her country. After most had left, friend and caregiver Lisa Smith said she deserved the appreciation.

“I don’t know that I do,” Thompson said.

After about 30 minutes, she was tired, and looking forward to a nap.

“Are you ready to go?” Smith asked.

“Yes!” Thompson said, and she pointed to a piece of chocolate cake: “That’s good, save it for me.”