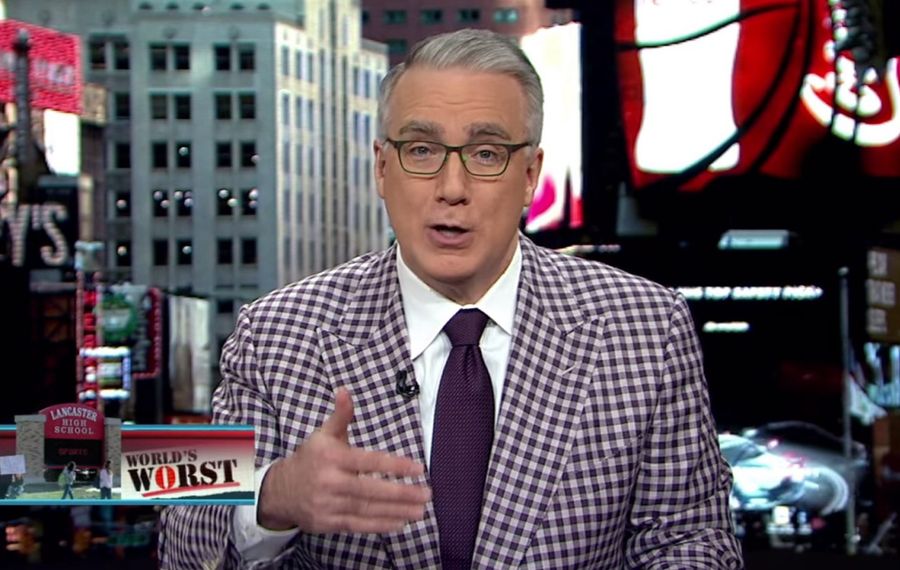 The Lancaster School Board’s decision last week to drop the “Redskins” name and mascot and the protests that have followed have caught the attention of the national media.

The latest making the rounds on social media is a clip from Keith Olbermann on his ESPN 2 show Monday, when he described the “pro-racist nickname” faction as “the worst persons in the sports world” of the day.

Olbermann criticized the mascot supporters and poked fun at their arguments. He pointed out that someone had suggested voting down the school budget.

“Which would mean,” he said, “the school might have to cut back extracurricular stuff, like, the sports program.”

He also singled out a sign held up at one of the rallies that quoted Holocaust survivor Elie Wiesel: “We must always take sides. Neutrality helps the oppressor, never the victim. Silence encourages the tormentor, never the tormented.”

Olbermann questioned whether Wiesel would be on the pro-mascot side.

“Just guessing,” Olbermann said. “Thinking he’s probably not on the side of those seeking to diminish and oppress an ethnic group by reducing them to caricatures and then using a derogatory, insulting name for them as a part of a public school system ... because he kind of saw how that ends up long term.”

But earlier this month, the anti-mascot side got some ribbing from Fox News.

“Maybe they think they’re having their Selma moment,” she said of the lacrosse teams at area high schools that announced boycotts against Lancaster over the mascot ahead of the Lancaster School Board’s vote to end the use of the name.

“This is being egged on by the adults,” she said.

Local and national media outlets have seized on the Lancaster “Redskins” debate, which increasingly divided the Lancaster community over the last few months and mirrors the debate over whether the NFL’s Washington Redskins should change its name.

Many consider the term an offensive racial slur, while others say is a tribute to Native American tradition.

Earlier in March, a community forum on the topic drew a crowd of hundreds. Following the announcements of the boycott by local lacrosse teams as well as concerns raised by parents that their children were being put in the middle of the debate, the School Board voted unanimously on March 16 to “retire” the mascot and nickname immediately.

The decision has been met with anger from the pro-mascot side. Several hundred students marched through the streets of Lancaster during school hours Thursday and on Monday night, a crowd of more than 100 showed up at the school board’s budget work session chanting “Let’s go, Redskins.”

Lancaster school district leaders say they are reaching out to students to come up with a new mascot and name for their athletic teams and also to look for ways to respectfully retire the “Redskins” name.

The district also made a video slide show that has been posted on its website as well as on YouTube called “We are Lancaster.”

“Lancaster has seen its fair share of attention lately. It is important to keep in mind what we are all about. We are one Lancaster. And we do great things,” reads the introduction to the video. The slide show, set to The Wanted’s “We Own the Night,” showcases students engaged in an array of school activities, from going “Bald for Bucks” to raise money for cancer research to the district’s recent Day of Kindness and students wearing black T-shirts emblazoned with the words “ONE Lancaster.”