Ken-Ton School Board member Todd Potter today announced his candidacy for the Erie County Legislature's 4th District. The seat is currently held by Kevin R. Hardwick, a City of Tonawanda Republican and a political science professor at Canisius College.

Potter is a lifelong Tonawanda resident, a D’Youville College alumnus, and a member of the SUNY Buffalo Law School class of 2015, according to a news release issued Monday. He was elected to the Ken-Ton School Board in 2013. 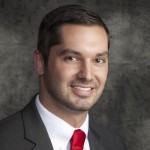 “I look around at the exciting changes happening throughout Erie County, and I know we can play a vital role,” Potter said in the release. “With a strong voice in county government, we can capitalize on our strengths and overcome our weaknesses to promote smart development and growth. It’s time to show what we in the 4th District can accomplish by working together.”

Hardwick was elected to the Legislature in 2009, and was re-elected in 2011 and 2013 when he fended off a challenge by Kenmore West High School economics teacher William C. Conrad III, a Democrat. The district covers the City of Tonawanda, Grand Island and portions of the Town of Tonawanda and Village of Kenmore.

Potter appears likely to be the candidate endorsed by the county Democratic Committee, which expects to hold an endorsement meeting for the district in the next several weeks.