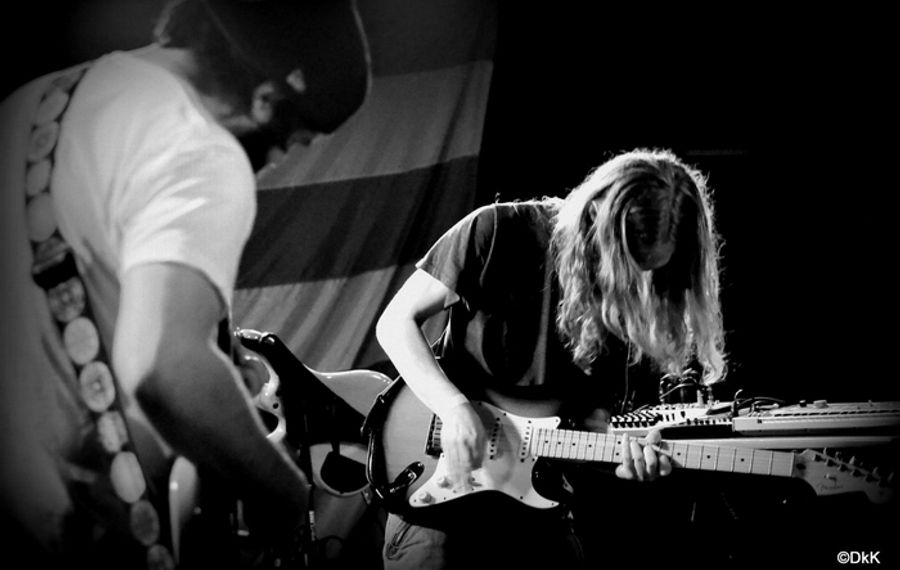 As the music throbs and pulsates from the speakers framing the performance space, a lone dancer works the small area between the edge of the crowd and the front of the stage, as if by tacit, unstated agreement between all present that this space is hers to work. She twirls a lighted hula hoop above her head, and then bam, she’s gone, lost in the music, responding to its cracks, fissures and textures as if she’s part of the band.

Though hula hoop dancers of this sort are a common site at music festivals and EDM parties alike, there was something poignant about this particular dancer on this particular Saturday at the Buffalo Iron Works. She worked in a solitary fashion, appearing to be all serious business until the music began to take her over, and her movements became more ecstatic than preconceived. Most of the rest of the crowd simply stood there, tapping a foot or nodding a head. The dancer didn’t seem to care. The music was transporting her.

The band that seemingly welcomed this unofficial extra performer to the proceedings was regional outfit Ocular Panther, which has sometimes worked beneath the contraction Ocupanther over the past four years.

Taking in their set – opening for the brilliant New York City instrumental funk quartet Tauk – it became obvious why our dancer was so taken by the music and so eager to interpret that music physically. Ocular Panther’s sound doesn’t so much caress and cajole the listener as it stalks that listener like prey through a jungle that sounds like it erupted from the mind of Salvador Dali. Essentially dance music, the band’s sound employs electro grooves as if they were the obvious basis for a brand of outer-space funk. The music is sinewy and menacing.

Interesting, then, that at the Iron Works show, all of this mildly threatening sound was being generated by three musicians. With drummer Jimmy Grillo indisposed, Ocular Panther performed as a trio, with front man Colin Jones handling guitars while simultaneously manning a bank of keyboards, sequencers and drum loops, bassist Jason Gilly to his left, and guitarist Mike Pantano to his right. A blend of world beat, European electro, and a futuristic marriage of both laid the basis for the virtuosic interplay of the three musicians, who managed to take what was essentially dance music into some deeply interesting places. Taking a page from the book of legendary psychedelic-electro outfit Ozric Tentacles – perhaps unknowingly – Jones, Pantano and Gilly tossed around melodic ideas, chord progressions, and repetitive, mantra-like figures like a group of friends out throwing around a football after Sunday dinner. They displayed a casual air about it all, but I still found the sound created in the process to be both thrilling and a little bit frightening.

Halfway through the band’s Iron Works set, my son turned to me and shouted in my ear something along the lines of “These guys sound like Lotus, with way better ideas and much stronger tunes,” and I laughed. The incredibly popular Lotus does indeed play music with similar sonic properties, but its songs tend to go nowhere fast, hoist on the petard of their own sonic inertia. Ocular Panther, however, seems to have no trouble crafting music that moves with purpose and forward motion, avoiding the pitfalls of lazy static repetition. Which is to say, this is music that you can dance to, analyze, or simply lose yourself within with equal ease.

Much of Saturday’s set was culled from the band’s third and most recent effort, “Data Stretching,” and pieces of musical cinema with titles like “The Great Oxygenator” and “Obtuse Snoot” sounded like their titles suggested they would – weird in the non-pejorative sense, surprising in their twists and turns, playful and serious at once. And the guitar playing? Fabulous, marked by snaky, winding melodic lines and highly inventive solos from both Jones and Pantano. Though the group is clearly plowing its own furrow, Ocular Panther can be seen as part of an area-wide musical movement that includes fellow electro-funk searchers like Space Junk and Sonder.

Ocular Panther has three albums out – the aforementioned “Data Stretching,” 2013’s “Progressor” and 2012’s “Troncoso.” All are available through Ocupanther.bandcamp.com. The group’s next scheduled show is, appropriately, an opening slot for the musical adventurers Consider the Source in Rochester’s Flour City Station on Thursday.