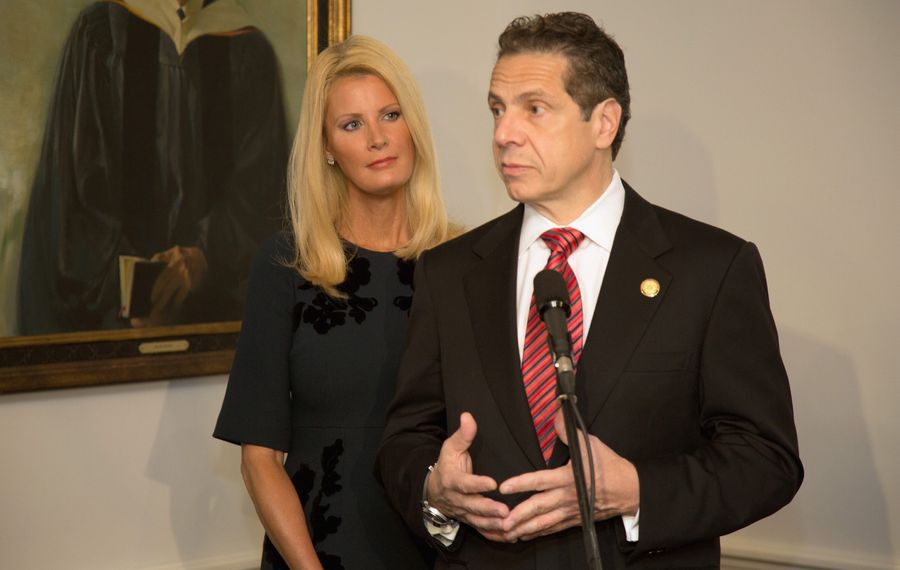 ALBANY – The ethics battle here is getting personal.

Like his predecessors, Gov. Andrew M. Cuomo does not take kindly to those who try to drag family members into the politics of Albany.

And that goes for his partner, Sandra Lee, the television food show host with whom the governor lives in a Westchester County home owned by her.

But her name became embroiled in a dispute last week between Cuomo and Senate Republicans.

The ethics issue is this: Should someone cohabiting with a state official, as Lee is with the governor, be required to disclose income on that official’s annual public financial-disclosure filing with an ethics agency?

That’s what Senate Republicans want in a provision that Capitol hallway whisperers were calling Sandra’s Law.

Lee owns the Town of New Castle home she shares with the governor, and if the law were enacted, it would require her to release a slew of information about her personal finances.

“This is not anything that is personal,” Senate Majority Leader Dean G. Skelos, R-Rockville Centre, said last week.

It might not be personal for Skelos, but it is hitting close to home at the Capitol. “The administration is glad to negotiate disclosure of all girlfriends,” Cuomo spokesman Richard Azzopardi tweeted in a not-so-subtle suggestion about the private lives of some lawmakers.

The governor has mostly used surrogates to address this dust-up.

Asked to provide a policy explanation of why the Senate GOP position would be faulty, Azzopardi referred a reporter to comments by Alphonso B. David, Cuomo’s counsel, made after Cuomo and Assembly Speaker Carl E. Heastie, D-Bronx, announced proposed rules to increase disclosure and address other ethics matters.

The Cuomo counsel said financial-disclosure requirements for domestic partners of state officials were not on the negotiating table.

Why not? “Actually, it doesn’t go to the source of the problem,” he said.

Effort is needed to bring more sunshine to the outside employment activities of state lawmakers and to ensure that there is no conflict between those sources of income and their state jobs, he added.

But Senate Republicans say Cuomo’s ethics package targets too heavily the activities of lawmakers, and does not go far enough in addressing employees under Cuomo’s control in the executive branch.

The fact that transparency does not apply to officials with unmarried partners, as it does to married officials, is troubling, they add.

Why? “My wife has to disclose. That’s my answer,” Skelos said in an interview.

The annual disclosure process for thousands of state employees requires financial information about an official’s spouse on everything from jobs to real estate and stock holdings.

New York State would not break new ground if it required the domestic partner of a state employee to disclose financial information. New York City requires it, and the National Conference of State Legislatures says it’s also the case in Alaska and Maine.

In 2007, Alaska expanded its ethics laws to become one of the most rigorous in the nation. The provision requiring domestic partners of state officials to file financial-disclosure statements spawned no controversy at the time, according to a state lawmaker and legislative staff member there.

There was nothing that drove it as an issue per se,” State Rep. Mike Hawker, R-Anchorage, said of the domestic partner provision in the ethics law. “We’re a small state with a citizen Legislature, and … we want information fully disclosed,” Hawker said.

It is uncertain how many people might be covered if the New York ethics law expands to require financial information about domestic partners.

If the state workforce mirrors the general population, there are thousands of state employees in this situation. Domestic partner households in New York stand at 6 percent, and that about matches the national figure.

Senate Republicans insist they are not making Lee the issue.

They say that many state employees in the Cuomo administration, as well as in the Legislature, are in domestic partner relationships and that their financial information should be disclosed just as for married officials.

The state ethics agency has defined Lee as a member of the governor’s first family, giving her the right to fly with him on state aircraft for official state business.

No one has suggested any conflict of interest between Cuomo’s job and Lee’s business dealings. There have been controversies in other states involving the domestic partner of an official. The most recent occurred in Oregon in February, when John A. Kitzhaber resigned as governor after allegations that he steered state contracts to his live-in fiancée and that she sought to tap into the influence of his office to boost her private consulting business.

In New York, Republicans note that Lee, a Food Network and entertainment celebrity, recently signed a deal for her own line of margarita products with alcohol beverage giant Diageo, a company that last year reported having six lobbyists working on alcohol-related issues in Albany, including representation before Cuomo administration agencies.

Lee’s relationship with the company predates Cuomo taking office. She has had various dealings with Diageo since 2004, according to a recent news release by the company, which makes Johnnie Walker whiskey, Ketel One vodka, Baileys, Guinness and other alcoholic beverages.

Over the last week, Skelos pointed several times to a 2009 deal that Cuomo brokered when he was attorney general that required new ethics disclosures by wind companies in dealings with municipal officials. That agreement on a code of conduct, which Cuomo then called a “new standard of transparency,” required disclosure of any ties that a local official – or their “spouse or domestic partner” – might have to a wind energy company.