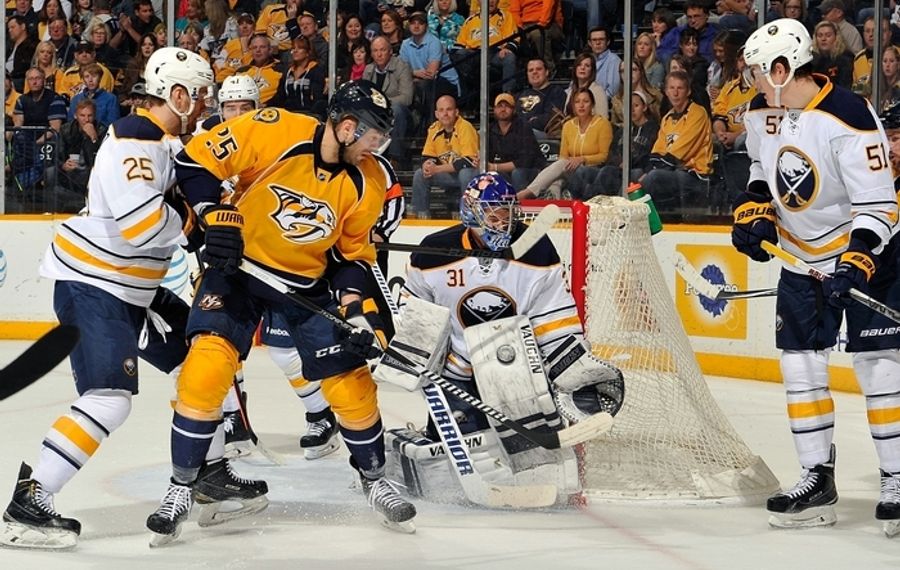 NASHVILLE – Maybe Arturs Irbe is some sort of Latvian sorcerer.

It almost makes no difference who is in the crease for the Buffalo Sabres because the team’s goaltending coach has every guy who takes over in the blue paint standing on his head.

From the departed Jhonas Enroth and Michal Neuvirth. To Anders Lindback, the guy every tanking Sabres fan wanted to see play who suddenly became the guy who absolutely had to grab some bench.

Hackett didn’t get a win Saturday night as the Sabres dropped a 3-0 decision to the Nashville Predators in Bridgestone Arena. But the 25-year-old was terrific on a night when the overmatched Sabres didn’t have much jump while playing the second half of a back-to-back set.

Hackett stopped the first 25 shots he faced, until Taylor Beck deflected home a Shea Weber drive to open the scoring on a power play at 14:52 of the second period. He finished with a career-high 40 saves in what probably ranks as the signature performance of his NHL career.

It certainly was far and away the best of his three NHL games this year, and thus his best since the catastrophic knee injury he suffered last April in Boston that put his career in doubt.

“I thought he was good. He gave us a chance,” said Sabres coach Ted Nolan. “For a kid who sat on the bench the last couple of weeks patiently waiting, we had a chance to work with him the last couple days and get him prepped to play this game. It wasn’t an easy game to play. They’ve got some good shooters on the other team and I thought he played real well.”

Hackett had a 5.22 goals-against average and .867 save percentage in his first two starts for the Sabres this season, getting pulled in his second one March 7 in Washington. He got pulled here last year too, giving up four goals on 15 shots in a 6-1 Buffalo loss. This was clearly a much better look.

Hackett was unavailable to comment afterward, as he was in a long session in the trainers’ room. There appeared to be no injury issue. The poor guy simply had to be exhausted.

This was a standard-issue Sabres affair, with Buffalo outshot badly (43-24) and getting destroyed in possession. The Predators had 76 shot attempts in the game and the Sabres had just 43. Many of them were borne from a decisive 37-22 advantage in faceoff victories – which included a perfect 13-0 mark from former Sabre Paul Gaustad.

Pekka Rinne made 24 saves for Nashville, including several spectacular ones in the third period, to post his 38th win of the season. It was the 12th time Buffalo has been blanked this season, extending the franchise record.

“We had some chances there to get back into it,” said Tyler Ennis. “Their goalie was good, made some big stops.”

Hackett made plenty too, keeping the Sabres afloat when they were outshot, 17-6, in the first period. He never lost his edge.

Nashville’s first goal came after Buffalo center Johan Larsson was nailed for holding the stick in the offensive zone at 14:48 of the second period.

The Nashville power play – in a 4-for-46 slump the last 15 games – paid immediate dividends as it took just four seconds for the scoreless tie to be broken. Mike Fisher won a faceoff from Brian Gionta and the puck was shipped to Weber at the left point by Matt Cullen. Weber’s shot was neatly deflected home by Beck, slicing through the slot from right to left.

The Preds made it 2-0 on Craig Smith’s goal at 5:49 of the third, a rebound of a Ryan Ellis slapper on a three-on-one break. The play started when Nikita Zadorov broke his stick in the Preds’ zone and then foolishly headed to the Buffalo bench, rather than at least try to keep his 6-foot-5 frame in the play.

Rinne preserved his shutout with 11 saves in the third period. After the second Nashville goal, the Sabres buzzed the net some more. Mikhail Grigorenko and Andrej Meszaros both hit posts. Rinne stopped Jerry D’Amigo on a breakaway and made a miraculous backhand save on Ennis.

Shortly after that stop, Fisher made it 3-0 at 15:01 with a quick snapshot from the slot.

“They’re not one of the top teams by accident,” Nolan said. “And their goaltender is one of the world-class goaltenders also. If it wasn’t for him, it could have been a little bit different.”