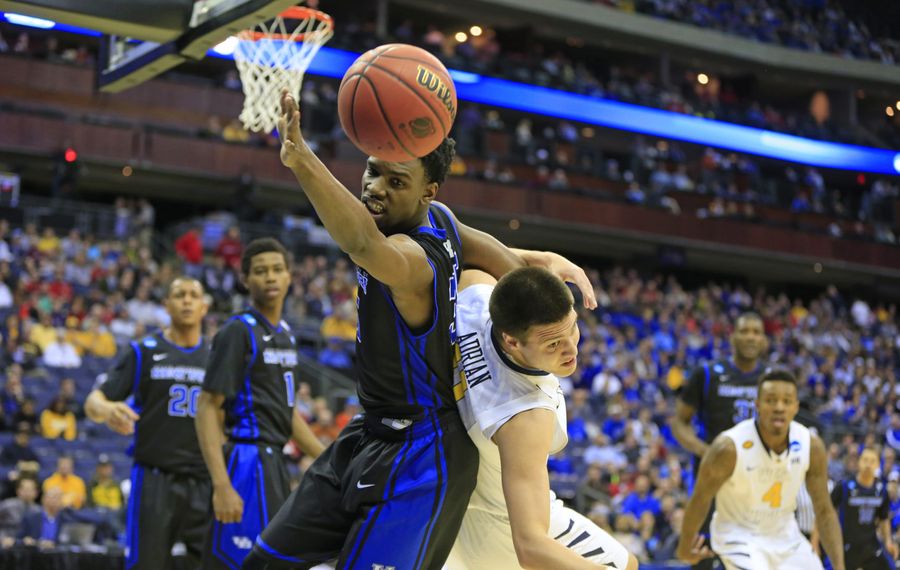 COLUMBUS, Ohio – The University at Buffalo scratched and clawed from behind for the first 37 minutes in Friday’s NCAA Tournament game against West Virginia. ¶ Then UB’s Xavier Ford hit a three-point shot from the left wing to pull the Bulls even for the first time, 62-62, with 2:41 to play. ¶ Bedlam ensued among the UB fans filling one quarter of Nationwide Arena. ¶ “I was thinking, ‘This is the March Madness,’ ” said UB senior forward Will Regan. “When ‘X’ hit that three, I knew there was some magic in the air.” ¶ Alas, UB’s magical season – the greatest in school history – went poof in the final two minutes. ¶ A missed

layup, a questionable foul and a great shot by West Virginia’s unlikeliest shooter sent UB to a 68-62 defeat.

“Obviously it’s a tough pill to swallow,” UB coach Bobby Hurley said. “We were finished with moral victories when we were at Kentucky and Wisconsin. … We felt we had a team that could win games in the tournament.”

As expected, UB had its struggles with the most aggressive, larcenous full-court pressing defense in the country.

UB made 12 turnovers in the first half in falling behind, 36-26. The Bulls averaged only 11.3 turnovers per game this year, 35th best in the nation. But UB never had faced the kind of relentless defensive attack that the 18th-ranked Mountaineers unleashed.

“Early on I think we were getting a feel and made some plays we probably wouldn’t normally make,” Regan said. “But our guys were resilient and came back and made some good plays.”

“They’re very big and long and athletic,” said UB guard Shannon Evans. “So their press is really good. And we broke it a few times in the first half. But we struggled as well.”

Actually, only two of UB’s first-half turnovers came in the back court. The rest were after the press had been broken, with UB driving to the basket or trying to make a final pass.

Against a great press, you can’t break it and then let the defense set up in the half court. You have to make it pay.

But just as it did against top competition in the Big 12 Conference all year, West Virginia forced UB to play at a little faster tempo than was comfortable. A driving shot was missed here, an offensive charge was taken there, an open three-point shot was launched without quite being set.

“We tried to simulate the speed and pace they would come at us, but it’s hard to simulate that,” Hurley said. “And I think our guys, as the game wore on, started to figure out how hard they needed to cut, how we needed to attack it. But initially in the early stages of the game, it’s just hard to figure that out as a player.”

Hurley lashed into his players at halftime.

The Bulls scored the first seven points of the second half to pull within 36-33. The lead went back up to 11, but UB would not go away.

When Ford hit his big three-pointer, UB had scored on five of six possessions. West Virginia, the No. 5 seed, was on its heels.

The next three possessions decided the

• With 2:10 to go and just seven seconds left on the shot clock, UB’s Justin Moss was called for a foul away from the ball by official Wally Rutecki. Devin Williams hit two free throws to put WVU up, 64-62.

Hurley gave Rutecki an earful walking off the court after the game. (Incidental aside: Rutecki had slapped Rhode Island coach Danny Hurley, Bobby’s younger brother, with two technical fouls in a three-game span over the past week.)

Said Hurley: “I can’t get into it other than in this type of game, at that point in the game, in a possession that really wasn’t going anywhere, it was just surprising.”

• Moss missed a reverse layup with 1:40 to go. It was a good play to get the ball to its big man on the baseline. The ball rolled out.

“No regrets,” Moss said. “We all tried to make all our shots.”

• West Virginia held the ball for the next 72 seconds (thanks to an offensive rebound), before sophomore guard Tarik Phillip hit a three-pointer with one second left on the shot clock. West Virginia was up, 67-62, with 28 seconds left.

It was just the sixth three-point shot Phillip made in 33 games this season. He averaged only 3.8 points a game.

“Probably the only one who wanted Tarik to shoot was Tarik,” cracked West Virginia coach Bob Huggins. “He had to. It was the end of the clock. But he relishes that kind of moment.”

“We closed out as good as you could close out to a shooter, and he made a great, contested, three-point shot,” Hurley said.

Evans missed an ensuing three-pointer and UB was sunk. UB did a lot of what it wanted to do. It was outrebounded only 31-30 against the best offensive rebounding team in the nation. It forced WVU, the country’s most foul-prone team, to make 25 fouls, two more than its average. UB made only 16 of 25 free throws. (Normally it would make 18 of 25.) UB shot a good percentage, 45.5, from the field.

Even the turnover total wasn’t awful. UB made 17. WVU had been forcing 20 a game. Freshman point guard Lamonte Bearden had some key buckets, finishing with eight points, but made seven turnovers.

“For us to have 17, it’s not a shocker for me,” Hurley said. “We don’t face teams like this usually that are physical in trapping and that are relentless the way they play their defense. They had a lot to do with those.”

“We have guys now that have gained invaluable experience being in this kind of game, and this setting, with this kind of pressure,” Hurley said. “And they conducted themselves in the best way possible.”