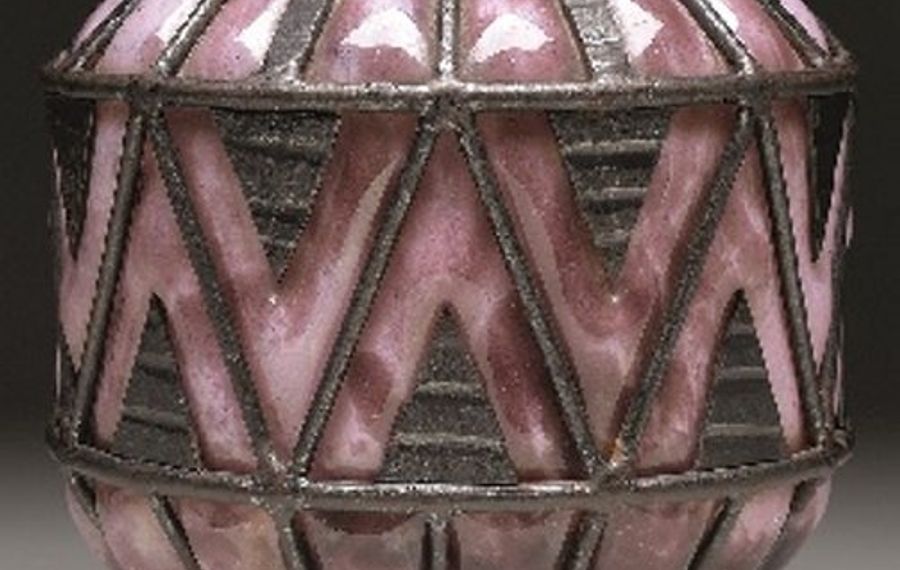 Daum, Lalique, Majorelle, Delatte, A. Walter, and Schneider are some of the famous glass makers working in Nancy, France, in the late 19th and 20th centuries.

A few still are creating quality glass vases and sculptures. Many of the makers used their names and the word “Nancy” in their marks. Daum and Majorelle worked together to make an early 20th century type of vase that is easy to recognize and known as “caged.”

Louis Majorelle was a famous furniture designer and decorator. He made many types of metal railings, hardware and exterior trim. He made decorative iron frames that were used by Daum. Mottled glass was blown into the empty spaces in the frame so that the glass was slightly raised between the metal parts. The finished piece looked like the glass was trapped in a cage. A purple and pink Art Deco caged vase was auctioned in November 2014 by James Julia for $1,244. It was signed “Majorelle Daum Nancy” with the Cross of Lorraine. Look for names with the word Nancy on Art Nouveau and Art Deco glass, especially on large vases. But beware – there have been many fakes and copies made since the 1960s. Some even say “Galli” hoping you will misread the mark.

Q: I bought a home with a large complete 1920s soda fountain, dispensers, stools and the rest. I’m looking to remove it and sell it, but I’m having trouble finding what a complete setup with seven seats is worth. It’s made by Liquid.

A: Soda fountains were in almost every corner drugstore from the early 1900s to the late 1950s, but it’s unusual to find one in a home. Soda fountains are sold at auctions, usually sales of advertising. You can contact an auction house. If it is an original old soda fountain, they will sell it for you and even arrange to get it to their auction site. Your Liquid fountain was made by Liquid Carbonics Manufacturing Co. in Chicago. The company made liquefied carbon dioxide. It test marketed its first soda fountain in 1903 and sold its first “iceless” soda fountain in 1906. The company name became Liquid Carbonic Corp. in 1926, so your fountain was made between 1906 and 1926. The company merged with General Dynamics in 1958.

Q: I have a blue glass mug with a picture of Shirley Temple on it. How much is this worth?

A: Shirley Temple (1928-2014) was an actress most famous for her roles as a child star. Your mug is part of a set that included a cobalt blue glass bowl, mug and pitcher. They were made by Hazel Atlas Glass Co. and U.S. Glass Co. from 1934 to 1942 and were given away as Wheaties and Bisquick premiums. Some were decorated with the picture of a very young Shirley, others used a picture of her in her 1936 Captain January costume. The mug sells for about $10.