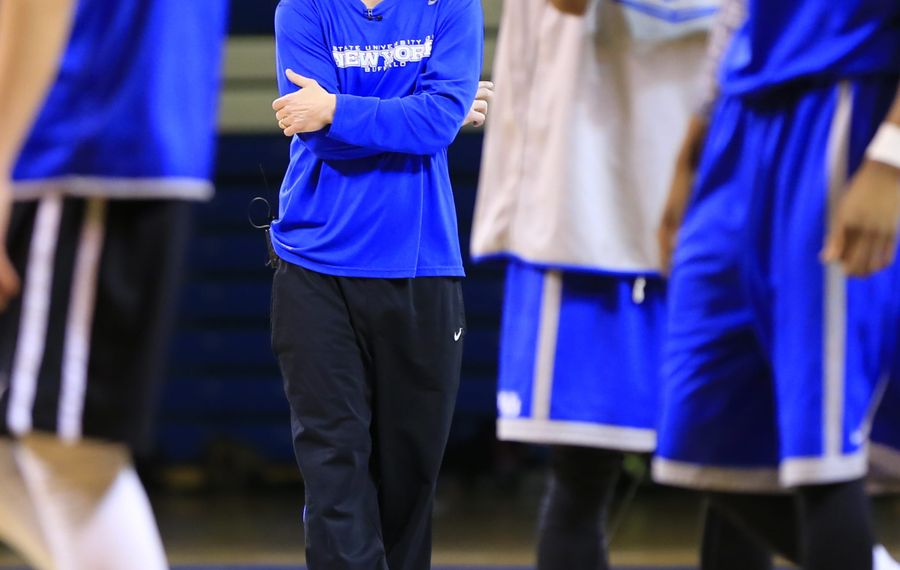 Bobby Hurley conjured up his glory days as a Duke Blue Devil when the University at Buffalo was at its lowest point this season.

The Bulls lost three straight games in mid-February and looked like they were headed toward an also-ran finish in the Mid-American Conference.

“When we were struggling at 6-6, I showed them clips of me playing versus UNLV when we lost by 30,” Hurley said, referring to the 1990 NCAA title game. “I showed them a five-minute video of all the worst plays that happened to me in that game.”

“He talked about how he was humiliated on national television and had to respond,” said UB senior forward Will Regan. “He sort of related his situation to our situation. He talked about the bad, not the good.”

“Then we showed the video of the next year, beating them,” Hurley said. “I just wanted to give them contrast and say you’ve got to open yourself up to possibly getting your heart broken when you play. … The flip side is there’s also a chance you can do this, which is really special. I just wanted them to see the possibilities and the excitement of what it could be like to play in the NCAA Tournament.”

The UB team that takes the court Friday against West Virginia is a reflection of its coach – intense, resilient and aggressive. Those are qualities Hurley has worked hard to instill in his players over the past two years.

“Have you seen him on the sideline?” senior forward Xavier Ford said when asked about Hurley’s style. “Just the intensity and the passion. … It’s always there.”

Hurley has received a fair amount of publicity in the MAC for his sideline demeanor. He was hit with seven technical fouls as a rookie head coach last season. In many games, he looked over-the-top petulant and abrasive toward the officials.

This season he’s still above average on the demonstrative scale. He has received six technicals, two of them in the first three minutes of games. But he clearly has made it a point to tone down his emotions.

“I’ve controlled my emotions a little more,” Hurley said. “It’s still not perfect. The thing is I have the fire when I coach. I think it depends how my team is playing. In the Central game I had a confidence about how they were playing that I could just focus on letting things happen. Sometimes when we’re not playing well or we’re flat, then I’m lashing out more at them and the officials, anything to try to find a spark.”

“I like their team better than most of the teams in the league because of their toughness level,” said Akron coach Keith Dambrot last month. “They play just like he did. Those guys play their behinds off for him, right? So obviously they like him, and they respect him.”

“They really compete, I think that’s the biggest thing,” said West Virginia coach Bob Huggins. “They’ve adopted Bobby’s personality. They really come after you. … They play without any fear.”

Hurley talks a lot about coaching his team hard in practice.

“I had the privilege of working for my brother as an assistant coach for three years with two different programs and seeing how he built the program and how you work day in and day out,” Hurley said of Danny Hurley, coach at Rhode Island. “The kids in skill development in the offseason make that commitment to doing it at a high level, making the investment you need. … Our practices are very hard. We’re very demanding as a coaching staff. When you’re that way with your team, in these hard games, they’re able to find a way and fight through it.”

“He doesn’t let you get away with not doing your job on the court,” Ford said. “But when you are doing your job, he does a good job of letting you know that, too.”

Hurley also benefits from having veteran leaders – Ford, Will Regan, Justin Moss and Jarryn Skeete – who are intrinsically motivated guys.

“We’ve got a ton of guys who prepare hard, and the coaches help us do that,” Regan said. “That’s what builds confidence.”

Hurley has leeway to be demanding in practice in part because he has instant credibility, due to his playing career. He also has the players’ buy-in for his entertaining, up-tempo offense.

“Our offense is very quick hitting,” Hurley said. “We don’t have drawn-out possessions. Very rarely do we get deep in the shot clock. We want to play a lot of possessions. It’s the type of basketball that we’re preparing our players for if they’re good enough to play at the next level. That’s just my style. We scored a lot of points at Duke when I played there. We averaged 89 points my junior year. I want to get up and down. They enjoy playing that way. They don’t want to walk the ball up the court.”

UB runs primarily a ball-screen offense, long prevalent in the NBA and increasingly popular in college. Butler ran it exclusively to the Final Four in 2010 and 2011. Players execute a variety of pick and rolls, pick and pops for a jump shot, and run through screens on and away from the ball. Good guards and big men who can shoot are key.

“Our offense is more built like an NBA team would run offense,” Hurley said. “I watch a lot of NBA stuff, and watch a lot of international basketball, which my brother did as well. We watch the European Championships, and I would see what those teams are doing and take some things from there.”

“It’s a perfect lead-in to the next level to the NBA or the highest level in Europe,” said Skeete, a junior guard.

Skeete says when it comes to offense, Hurley is responsive to the players.

“I feel like we have a down-to-earth, player-to-coach, former player-to-player relationship,” Skeete said. “He’s very understanding. He knows when we need time off on our legs. He understands when you get in the game and get hot, want to keep it coming to you. On the floor, he asks me all the time, ‘What do you see? Do you see mismatches?’ ”

For all those reasons, Hurley doesn’t need to discuss his playing days very often.

“He doesn’t really talk about it much, to be honest,” Ford said.

“Surprisingly, I thought he’d bring it up a lot more,” said Skeete. “We honestly bring up more of his memories than he does.”

“They kind of know my story, and I don’t want to hit ’em over the head with it,” Hurley said. “They’ve seen videos. They see my ring all the time. I don’t need to bring it up. If there’s something I think is valuable or can make sense for the team, I’ll share it. But I don’t go there that often.”

It’s one of the advantages of being Bobby Hurley.

“He’s done it in the college game at the highest level,” said Duke great and former Hurley teammate Grant Hill. “He has experienced the highs and the lows. Being able to share those experiences is a way to make the ups and downs of the Buffalo season a teaching opportunity. He cannot only speak about it, he can show it. I think that’s a huge bonus for his players and for him as a coach.”