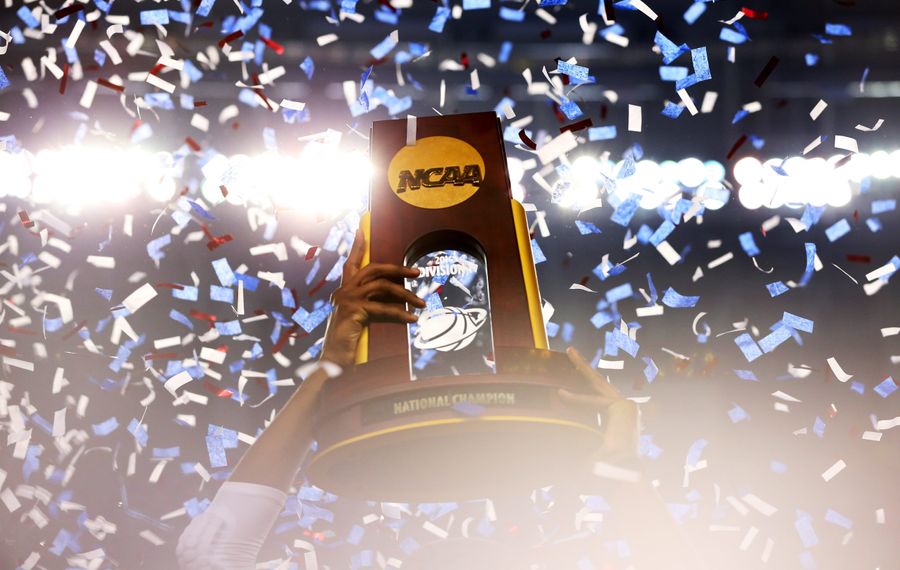 Kentucky looks to become the eighth team to win the national title as an unbeaten.

Where would you rather be …

How long has it been since the Buffalo Bills went to four straight Super Bowls? Twenty-two years? But memories persist. Here’s what 34-year-old coach Andy Toole had to say when Robert Morris won the Northeast Conference Tournament after falling in the title game three of the previous four seasons: “A lot of my friends have been calling me Marv Levy because we haven’t won the big one. It’s nice that I can call them back and tell them we finally won one.”

Last year all the buzz belonged to Wichita State, which entered the tournament 34-0 and fell to national runner-up Kentucky, 78-76, in the third round. This time the Shockers, beaten by Illinois State in the Missouri Valley Conference semis, enter 28-4 and with a No. 7 seed. Still dangerous? There’s no Cleanthony Early (22), but guards Ron Baker and Tekele Cotton (32) were starters on the 2013 Final Four team while fellow guard Fred VanVleet played noteworthyminutes. Backcourt poise is significant in tourney play. The Shockers get Indiana for openers and then, if they survive, a probable it’s-about-time matchup with Kansas.

Northeastern’s in The Dance for just the second time since the conclusion of the Reggie Lewis era in 1987. The Huskies went to the NCAAs in each of Lewis’ four seasons and lost to VCU in 1983-84 despite shooting 75 percent from the field. The first three of those teams were coached by Jim Calhoun, who went on to win three national championships at Connecticut.

The first NCAA trip for UB coincides with the first for former Bulls great Turner Battle, an assistant at Alabama-Birmingham. Battle was MAC player of the year in 2005, the year UB squandered a 19-point lead in the conference title game and lost to Ohio in overtime. Since then, Battle played in Europe and worked as an assistant at UB and Tennessee Chattanooga. This is his first season at UAB, which rode the magic carpet to the C-USA title. The Blazers tied for fourth in the regular season and are 19-15 overall. Former Kansas player Jerod Haase is the head coach. UAB went 12-6 its last 18 with all of its losses by four points or less or in overtime.

Coastal Carolina’s Cliff Ellis, right, will be making his 10th NCAA appearance. He’s the only coach to have won at least 150 games at four schools and one of 11 who have taken four schools to the NCAAs. His others were South Alabama, Clemson and Auburn.

New York has four teams in The Dance and not a one of them is named Syracuse. In addition to UB, the Empire State is represented by Albany, Manhattan and St. John’s.

Last year Indiana didn’t put a single team in the tournament. This time around the state has five (Overall records in parentheses):

After Manhattan gave Louisville a run in the second round of last year’s NCAAs, Jaspers coach Steve Masiello took the head job at South Florida. But then it was discovered that Masiello hadn’t finish his undergraduate work at Kentucky and therefore lacked a college diploma. South Florida killed the deal but Manhattan agreed to take Masiello back so long as he completed the few courses separating him from a degree. Manhattan earned another trip to the NCAAs (losing Tuesday). South Florida finished 9-23 overall.

St. John’s coach Steve Lavin, right, threw his team at the mercy of the court when he announced just hours before Sunday’s selection show that center Chris Obekpa was being suspended two weeks for violation of team rules. How many coaches would have made such an announcement concerning their best player with his team no sure thing for inclusion? Sometimes – sometimes – honor and honesty prevail. The Red Storm face San Diego St.

Making sense of it all

This is the last year that 60 teams in the tournament’s 68-team field will open play with “second-round games.” Beginning next year, the NCAA has deemed it proper to call the first full round the Round of 64 and the following round the Round of 32. It made the decision in November but apparently believed fans needed more than a year to adjust to what would have made sense all along.

And the awards go to

Defense is the ticket

Indiana was considered a bubble team at best. The Hoosiers went 5-9 over their last 14 games and didn’t beat a Big Ten team with a winning conference record since knocking off Maryland back on Jan. 22. But the Selection Committee, applying its ever-pliable rationale in the assessment of power conference programs, not only embraced the Hoosiers but also dealt them a ridiculously high 10 seed.

“I think most people don’t try, and they live in the middle. They don’t put their hearts out there, and they try and protect themselves. When you do this and you put your heart out there in front of all these people, sometimes it’s exhilarating and sometimes it’s incredibly painful. But that’s what living feels like.”