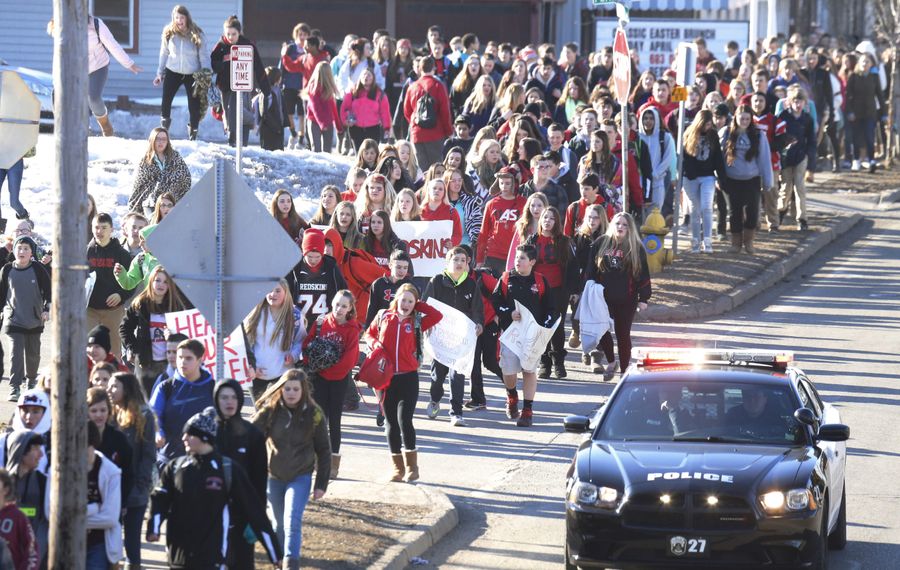 Hundreds of Lancaster students took their anger over the loss of their beloved “Redskins” mascot through the streets of the village Thursday morning.

Police and firefighters were everywhere, keeping close watch as the students marched down Central Avenue.

“I think it’s awesome,” said businessman Kevin Snieszko, a 1991 graduate, who was among bystanders gathered by the administration building. “Finally, people are standing up for their First Amendment rights. It’s gone beyond a name now. People are getting sick of constantly being told what to do.”

As the students chanted “Redskins” and carried signs with messages such as “Redskins forever” and “School board speaks with forked tongue” it was clear that the Lancaster school community’s transition to life without the “Redskins” name is going to be messy.

“We realize that traditions are sometimes hard to leave behind,” Superintendent Michael J. Vallely said. “But we do need to rethink traditions when they have become hurtful and perceived as disrespectful of others, even unintentionally.”

The mass student protest came three days after the Lancaster School Board unanimously voted to immediately retire the mascot and athletic team name after weeks of debate. Many in the crowd of about 700 at Monday night’s meeting were livid with the board’s vote, jeering at the board and administrators. Some vowed to vote board members out of office.

Soon after the vote, students began to spread the word through text messages and social media about plans for a protest.

Thursday morning, minutes after they should have reported to homerooms, Lancaster High students bolted from school grounds and ran onto Forton Drive, heading south toward Central Avenue and the village. Lancaster police scrambled to control traffic, blocking intersections so that the students could safely pass.

Police Capt. William Karn Jr. said police were most concerned with the safety of the students, who stayed on the right side of the law during their demonstration. “They’ve done nothing wrong on our end,” Karn said. “They’re expressing their First Amendment rights. It wasn’t out of control. They’re doing their thing. Obviously, they are kids and are boisterous.”

Lancaster senior Kali Foss loved every bit of it. “I wouldn’t take it back for a minute,” she said. “We made our point. We kept it peaceful. No one was rioting.”

To Kali and other students opposed to the dropping of the mascot, the name was never meant to be offensive or a racial slur – as others and the School Board have said.

But parent Amy Napieralski, whose two sons play on the varsity lacrosse team, was upset, noting that with just 10 percent of the student body choosing to protest, it showed how many chose not to march.

“Ninety percent of the students are in school and their voices aren’t being heard,” Napieralski said. “We focus on the small, vocal minority and it’s easy to overlook the bigger picture.”

“My kids are embarrassed that this small minority is becoming the face of their school,” she added. “They’re concerned that they’ll be viewed as racists when they play away games for their lacrosse team.”

“I think a majority of the people are probably upset this even happened,” he said of Thursday’s protest. “This in no way honors the spirit of the district, or the community.”

Graber was pleased the march stayed peaceful. “Nobody got physically harmed, which is what we were afraid of,” he said. But he has been disappointed by the reaction of some in the community who are against the board’s decision.

“For 37 years, I sent people to prison, and they took it much more graciously,” said Graber, a 31-year administrative law judge who also served six years on the state parole board. “They understood what was going on and accepted it.”

Vallely said he respects the students’ right to free speech and assembly. “At the same time, the students are aware that we have a Code of Conduct that articulates expectations for attendance,” Vallely said.

Students involved in the protest who missed school will face attendance consequences, but no additional sanctions, the district said.

Rumors of the prom or graduation being canceled were unfounded, said Patricia M. Burgio, a district spokeswoman. “Prom and graduation were never on the table,” she said. “Nobody will censor the term ‘Redskins’ at graduation. If they want to put it in a speech, nobody will tell them not to.”

The district has instead emphasized plans to work with the students to have them come up with a new mascot over the next several months.

That process began this week with meetings with students, and student leaders considering how to review and recommend several options for a new mascot and logo, as well as a plan to respectfully retire the old mascot.

The students who protested Thursday want their mascot to stay. “Everyone just wants to keep the name,” said senior Wade Webster, the protesters’ designated spokesman. While many argue that the nickname is offensive, Wader had a different take: “It’s offensive to lose our own name,” he said.

Kali, like many, didn’t return to school after the protest. “A lot of kids decided to go home to make more of a statement, because if we gave in and went back, it wouldn’t have been as effective,” she said.

The district was quick to change its mascot reference on its website, noting the district’s mission of pride, tradition and spirit. The old logo has been replaced by a red “L” and a detailed explanation of the board’s resolution to drop the nickname appears.

In coming days, the district said, a “transition” Web page will be posted to lancasterschools.org to keep the community apprised of developments. The School Board will eventually vote on whatever student recommendation Vallely brings to the board.