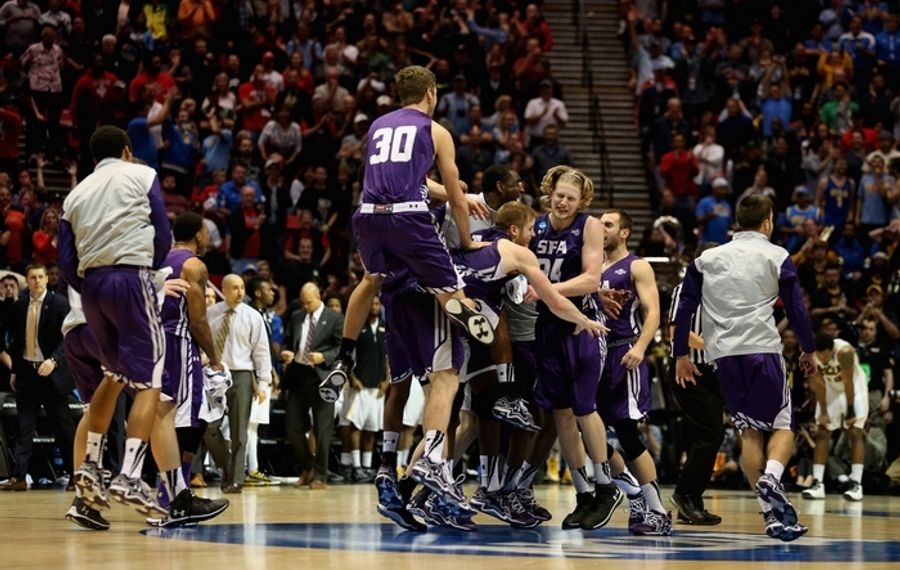 My head is spinning again. After all these years of reaching for upsets, could I actually be getting worse? I thought my West Region bracket was nutso, but this one is almost as bad. It’s like bringing back McMurphy, and making Cuckoo’s Nest II.

But really, it’s not that crazy. North Dakota State won a game last year, didn’t they? The Bison (yes, it’s singular) lost three starters and their coach from last year’s team, but they won the Summit League.

Stephen F. Austin, which is seeded 12th, beat VCU in overtime last year as a 12 seed. Why couldn’t they beat Utah? They have one loss since Thanksgiving. So what if it came against Texas A&M-Corpus Christi, which I wasn’t even aware played in Division I?

The school’s namesake, Stephen Fuller Austin, is considered the Father of Texas. Austin helped colonize the region in 1825, bringing 300 families west with him. The state capital was named after him. I’m pretty sure wrestling icon “Stone Cold” Steve Austin was not.

There are five Texas schools in the Big Dance, by the way: Stephen F. Austin, Baylor, SMU, Texas Southern and Texas. One day, Texas A&M-Corpus Christi might get there. Not to mention the University of Incarnate Word, another Texas school that plays in the Southland. I’m serious.

You know what’s fun? The way the NCAA sets up potential second-round matchups with intriguing story lines. Like Kansas staring down Wichita State in the Midwest and Virginia lined up to meet Michigan State, which knocked them off last year, in the East.

If Duke and San Diego State both advance, the 1-8 game in this bracket will pit Mike Krzyzewski and Steve Fisher. Coach K and Fisher coached against each other in the 1992 national championship game, when Duke beat the Fab Five freshmen in Christian Laettner’s final college game.

Oh, if you missed “I Hate Christian Laettner,” the 30 For 30 feature on ESPN, go back and watch it. It was sensational. There’s great stuff in there about Laettner’s younger days in Buffalo, including some amazing

footage of some high school games, including the South Park brawl.

One other note about the South Region. Turner Battle, who nearly led UB to the NCAAs as a senior 10 years ago, is an assistant under Jerod Haase at UAB. He finally made it to the Dance last Saturday, the same day his alma mater got in. I thought that was nice.

Game to Watch: Stephen F. Austin-Utah. Thomas Walkup, the Southland player of the year, leads SFA with 15.7 points and 6.4 rebounds a game. The Lumberbacks are no walk-it-up team. They’re ninth in the country in scoring and first in assists. Utah, a Pac-12 at-large that lost three of its last five, is among the top 10 in the land in scoring defense and field-goal D. Something’s gotta give.

Upset City: Eastern Washington over Georgetown. I told you this was a wacky bracket. But the Eagles could pull it off. They’re third in the country in scoring (80.8ppg) and have the nation’s scoring leader in Tyler Harvey. Plus, the Hoyas make Cinderellas possible. VCU beat them on their amazing Final Four run in 2011. And Florida Gulf Coast became a tournament darling by shocking them as a 15 seed in 2013.

Sleeper: Iowa. An uninspiring choice, but the Hawkeyes did win at North Carolina and Ohio State. They have a versatile star in forward Aaron White, the only player in the country who averaged 15 points and seven rebounds while shooting 50 percent from the field and 80 from the line. Hey, if all those crazy upsets come to pass, there’s no telling how the South might look a week from now.