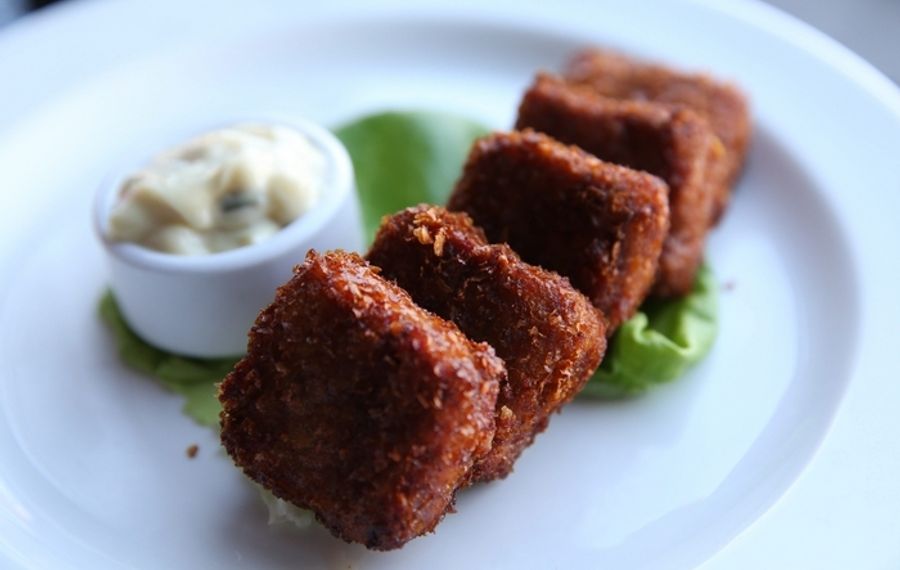 In his drive to use every last element of the Lockport-raised pigs that anchor his menu at the Black Sheep, chef-owner Steven Gedra has sold numerous dishes that could be fairly labeled niche items.

The pork chops, brined, smoked and seared, are a relatively easy sell. Not everyone is interested in eating pig trotters, no matter how traditional the stuffing. Pig’s tails and pig’s ears are tasty but still have an image problem. Only the hardiest of carnivore covens signed up for the multi-person feasts Gedra designs around pigs’ heads.

Burro di chianti, whipped lard seasoned with spices and salt, doesn’t even count, since it comes free with the basket containing two or three kinds of housemade bread. Pigskin fritters on spicy corn chowchow and romesco sauces is practically mainstream by comparison.

None of them has the mass appeal of BBQ pork nuggets. Using prime locally raised ingredients and housemade ingredients, Gedra and his crew make an appetizer that would not look out of place at any truck stop in America. Except for the price, $10 for an order of five nuggets.

They even come with a side of ranch dressing, made from aioli, buttermilk, celery seed, dill seed, garlic and other spices.

He knows that ranch dressing is not synonymous with ambitious restaurants like the Black Sheep.

“When you make it well, it’s really good,” he said, and that’s all that matters.

To make the nuggets, T-Meadow pork shoulder is rubbed with barbecue spices and smoked for 12 hours. “Then we make a kimchi barbecue sauce loaded with gelatin from the pig, extracted from pig skin,” Gedra said. The shoulder meat is shredded, set in that sauce and pressed, then chilled overnight.

In the morning, it’s set like meat Jell-O, and cut into blocks. “We roll them in BBQ potato chips, and fry them up,” said Gedra. The gel melts, making the porky mouthfuls juicy inside the golden crust.

Does he deliberately try to offer lowest-common-denominator food transformed with high technique and ingredients?

“There’s really no philosophy to it,” he said. “We just try to find good stuff, and cook what we love.”