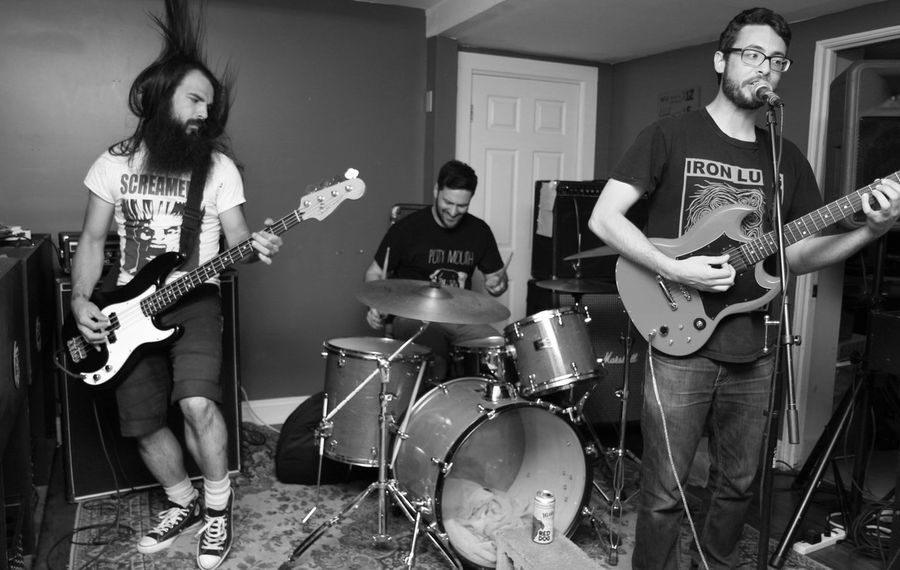 This past Saturday night, in a packed West Side basement, a couple of Buffalo's best bands - Space Wolves and Newish Star - celebrated the releases of their new cassettes.

"It was a serendipitous coincidence," said Newish Star singer Jordan Nittoli. "Plus, it’s always nice to have an excuse to do a free, all local gig."

The cult surf-punk duo, Space Wolves (who you may remember from last week if you follow this column), dropped the latest installment in its self-titled collection. Newish Star premiered its newest tape, "How Soon We Forget."

How Soon We Forget by Newish Star

"I had mainly just played guitar or bass in bands, and I never had sung before. I had access to a 4-track, and during the terrible winter of 2014, spent a lot of time recording. Now that I had a finished demo tape, it became a lot easier to share with my musician friends. Josh heard it (and liked it) and somewhere along the line, Biff entered our hearts. We’re a band."

As for the writing process, Nittoli seems to keep it pretty simple. "Ninety-five percent of the time, I write the lyrics before writing the 'song.' I write the lyrics, and figure out the melodies in my head. From there, it’s fairly easy to add the chords and other junk to it."

Look Both Ways by Newish Star

Like many musicians in Buffalo, Newish Star is just one of the many projects for the three busy musicians, certainly making it easier to catch at least one of the band members live on any given month.

"Josh and I play in Dream Journal together," begins Nittoli. "Biff plays in Blobs and Aaron and the Burrs. I currently play drums in a new project called Alien Three with my pals Alex French and Tony Flaminio. Josh, Biff and myself are also toolin’ around with some other things with other people that haven’t come to fruition just yet. We’re all very excited."

When they aren't playing in their various bands, the members share a common affinity for the classic arcade game of pinball, something that is much more than just a game to the group, Nittoli in particular.

"Josh said it best: 'Pinball as metaphor for life,'" explains Nittoli. "I think pinball is a very gratifying waste of time. I find their mechanical nature to be really interesting, and it’s also more physical than one may imagine. Don’t tilt!

"If you really start to delve into the hobby, you’ll come to find out that every game is unique, and it’s more than just aimless flipping to keep the ball from draining (although, it is important to not let the ball drain). Everybody should go to Pocketeer Billiards on Clinton in Cheektowaga. They have 16-plus pinball machines. Also, if you ask Biff nice enough, he may let you come over and play his machines."

Look Both Ways by Newish Star

With the successful release show behind them, and another great tape under their belts, the three members look to take "How Soon We Forget" (a nod to Founding Fathers bartender/quiz master Mike Driscoll) on the road, something that is much easier for them now with the proper transportation.

"Now that Biff has a van, all we wanna do is hit the road. I bet we’ll do at least a week in the not-so-distant future. We have more recordings coming up and a 7-inch down the road, for sure."

If you didn't catch Newish Star this past weekend, your next chance to see the band live is March 24 along with Diet Cig and Earl Boykins. Further event details can be found here.

Listen to "Penguins" from "How Soon We Forget" below.

How Soon We Forget by Newish Star