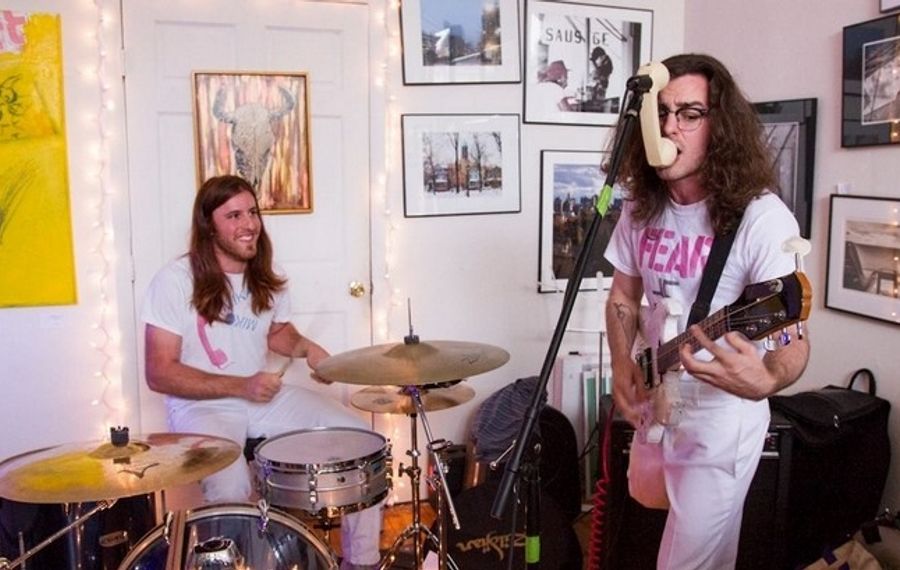 After releasing four albums in less than a year (something that would put Ty Segall to shame), local duo Space Wolves took some extra time before the release of its fifth tape, “Space Wolves V,” which is set to officially drop on Saturday.

Space Wolves – Nicholas Reynolds (guitar, vocals) and Chris Scamurra (drums) – has been creating quite the buzz in Buffalo since the two debuted the project in the fall of 2012, releasing a new tape almost as frequently as they played live, something that the duo’s vast catalog of songs certainly made easy.

“We made a collection tape of all the songs we put out in our first year of existence,” explained Reynolds. “It was 50 songs in 90 minutes. On some level, that’s too much for anyone to digest all at once. That said, we have plans to record a lot more this year. Other than that, I’m in a couple other bands (Aaron & the Burrs, Blobs) that I take pretty seriously. Chris is also in another band (Kharlos) that he’s been working really hard lately.”

The surf-punk duo goes a long way back, originally meeting and playing music together simply out of convenience during middle school in Amherst.

“I asked Chris to be in a band with me when we were in eighth grade,” recalled Reynolds. “We weren’t really friends yet, but not many people played instruments, so the talent pool was pretty limited. He turned me down. He ended up asking me to join his band the following spring.

“Our [first] band was called The Illiterates, and we were terrible.”

After nearly seven years of playing music together, Reynolds and Scamurra slowly honed down on a sound – over-before-you-know-it bursts of power pop/surf rock – that would become Space Wolves’ signature. It’s a catchy and infectious sound that made the two a bit of a cult band around the Buffalo scene.

“Chris and I were doing a lot of one-off recording projects in 2011 and 2012,” said Reynolds. “Space Wolves grew out of a few of those sessions. The idea to put out five cassette tapes under one name became a real plan in July 2012. It took us almost three years, but we did it.”

While Reynolds and Scamurra have hit the road in the past to support their growing collection of self-titled tapes, for “V,” the two plan on sticking around Buffalo to work on future projects.

“We have no immediate tour plans for this tape,” Reynolds said. “Chris and I are actually both practically derelicts, so we have a really hard time booking tours. We don’t have the schmooze in us. We do, however, have plans for a couple more tapes/records. The immediate next one is going to be a set of covers of ‘60s French pop songs with new English language lyrics. Then we are going to do an LP and maybe another tape before the end of the year. Don’t quote me on that, though.”

“Biff, the bassist in Newish Star, and I are really close,” Reynolds said. “I’ve also been a fan of the band for quite a while now. I recorded Jordan [Nittoli]’s ‘Jewish Starr’ tape before Newish Star really coalesced.”

Alpha Hopper and Alex French will be on hand to cap off the solid bill on Saturday.