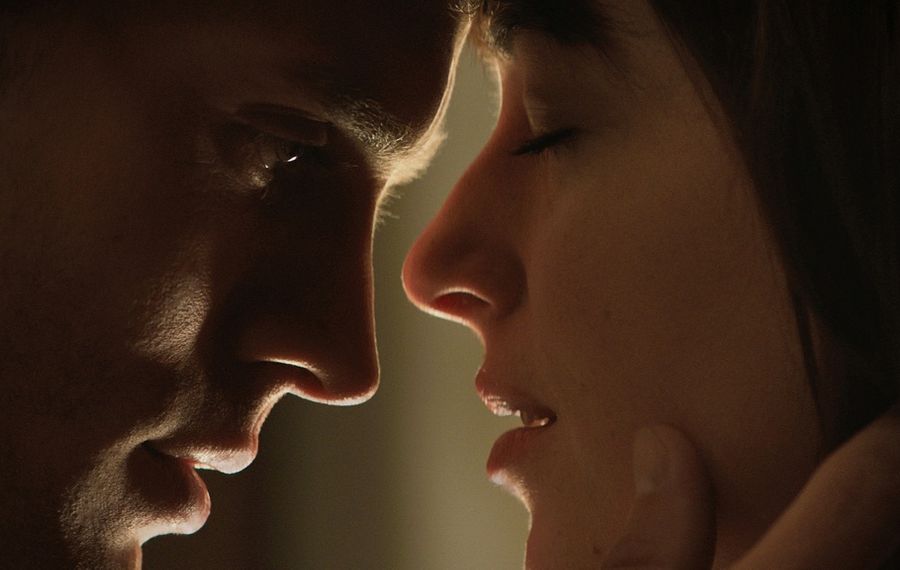 Let me tell you what happened in my row at the screening when Jamie Dornan finally bared his tush on screen in the first love scene in “Fifty Shades of Grey.” The young woman next to me applauded and cheered loudly and shamelessly, as did her girlfriend next to her and quite a few other women in the theater.

She couldn’t have cared less that right next to her on the aisle was a mature gentleman her father’s age at least. She was there to indulge herself freely in a movie cunningly tooled to fulfill her fantasy needs. To use the sniper vocabulary of modern marketing, the “target audience” for the film didn’t exactly include the dude with the yellow pad taking notes in the aisle seat.

Yes, there’s a fair amount of sex and nudity in “Fifty Shades of Grey,” but you’re in the wrong theater if you can’t see this thing as a gushing wallow in woman-centered romance rather than a young woman’s nasty introduction to S&M.

I mean, come on now. The “dominant” billionaire hero looking to recruit a new “submissive” for his “play room” on weekends is the kind of guy who holds a girl’s hair back when she’s drunkenly vomiting on the sidewalk and never mentions her breath afterward. He buys her a new car, a stack of Thomas Hardy first editions and, when he’s not making the money to do all that, sets up Bill Gates-ian foundations to alleviate world hunger.

And, oh yeah, he’s a connoisseur of music and good gin too. When his new young lady enters his apartment, Villa-Lobos is playing on the stereo. His gin of choice is Hendricks or, if unavailable, Bombay Sapphire. (A man after my own heart.)

Yes, yes, yes, he blubbers a whole lot about needing to control everything and everyone and maunders on a lot about his life as a “dominant” in sex games. And he has a “play room” full of “floggers,” whips, riding crops, handcuffs and pulleys to lift naked, trussed-up “submissive” partners into the air.

His tendency to show up in her life at unexpected moments is stalking, to be sure. But, for pity’s sake, this is romantic fantasy, pure and simple, wherein the whole point is to domesticate real world behavior into the perfectly controlled unrealities of the imagination for readers and moviegoers who never have to suffer a scratch.

Anyone who knows beans about literature knows that leisure class women were the first dedicated audience for the novel. Without their narrative needs, Western literature might have been in a dungeon on a bread and butter diet for centuries.

So here we’ve got impeccably tailored billionaire Christian Grey and his appointed young college girl Anastasia Steele (you’ve got to love James’ names). But the whole point of the movie is that Mr. Superkink Richboy is going to get schooled big time by his brainy and secretly steely new love. He’ll learn a few things about the fine art of being a human being and a romantic, yet.

Her college GPA wasn’t 4.0 for nothing.

If you doubt the wisdom of opening this baby on Valentine’s Day, you’re daft. It’s the perfect weekend for it. It’s a romantic movie whose kink quotient mostly hovers around the level of light spanking and tickling with peacock feathers while bound with soft ropes.

When things in Christian Grey’s darkly lit “play room” oh-so-briefly get down to rough stuff business, the point of the plot kicks in, leading to an utterly delightful ending that had me guffawing with pleasure for many minutes after it was over.

We are obviously being set up for Parts Two and Three of James’ trilogy. (Sequels to come here? Bet the farm on it.)

It is there, I must confess that, as my grown daughter sarcastically puts it, “Among the man-hating feminist killjoy brigade … most of the stuff that ideologically makes us want to eat glass is in books 2 and 3.”

But let’s not put the cart before the horse. We’re not there yet. We’re only at the beginning of the “shades” saga of Christian and Anastasia. It is funny and entertaining and, in the immortal words of director Sam Taylor-Johnson in the L.A. Times interview Gusto printed Thursday “dirty but classy.” (That, of course, means “ostentatiously upscale and well-behaved” which is what the hopelessly unclassy word “classy” usually means when we talk about movies.)

The best part about this “dirty but classy” certain hit is, by far, the appearance of the two young leads, in particular Dakota Johnson who his utterly adorable as Anastasia until the time comes for her to get naked and writhe around which she does with enough professional conviction to keep the narrative afloat.

Dornan seemed a bit less appealing to me, but the women in the audience seemed to be just fine with him.

What is so delightful to me about Johnson’s major arrival onscreen is that she is third-generation Hollywood. You can see her genetic makeup in her lovely face; her parents are Melanie Griffith and Don Johnson. Her grandmother is Tippi Hedren, Griffith’s mother.

You want to know my movie critic’s fantasy about this film?

Lovely granddaughter Dakota goes to Grandma and tells her she’s got the lead role in the movie of the blockbuster S&M fantasy. Does Grandma approve?

Grandma then tells her about the on-set S&M many have said she suffered from director Alfred Hitchcock during the making of Hitchcock’s masterpiece “The Birds.”

Whereupon, Dakota lovingly tells her “This one’s for you, Grandma.”

The family, bless them, has finally gotten its revenge.

Who’s the “dominant” and who’s the “submissive” now?