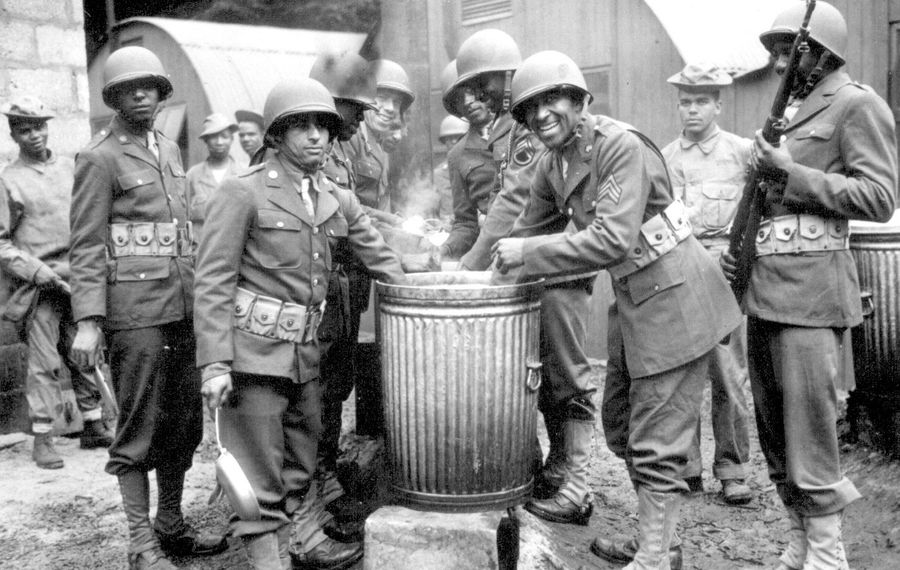 “It is hereby declared to be the policy of the president that there shall be equality of treatment and opportunity for all persons in the armed services without regard to race, color, religion or national origin.”

SPECIAL TO THE News

Most people don’t know about the executive order issued by President Harry S. Truman on July 26, 1948, desegregating the armed forces. Prior to this, all military services were segregated and most African-Americans were not eligible for combat duty.

When black men volunteered or were drafted after the Japanese attack at Pearl Harbor on Dec. 7, 1941, they were relegated to segregated divisions and combat support roles, such as cook, quartermaster and grave-digging duty. The military was as segregated as the Deep South, all because of skin color.

Black men fought with little recognition in all of America’s conflicts. The stories that follow describe those of local World War II African-Americans interviewed for the Veterans History Project of the American Folklife Center. According to the center’s website, the project “collects, preserves and makes accessible the personal accounts of American war veterans so that future generations may hear directly from veterans and better understand the realities of war.”

During our conversations, the black soldiers’ feelings of humiliation sometimes exploded with great anger, even after a period of more than 50 years. I speak of the disgrace of segregation in the armed forces. Here are their stories:

Robinson, now deceased, recalled that he and 4,500 African-Americans assigned to the Quartermaster Corps in the European Theater answered Gen. Dwight D. Eisenhower’s call to replace white troops shortly after the Battle of the Bulge. But they soon found that volunteering meant a reduction in rank.

“Blacks could serve with whites only at the lowest ranks of private and private first class,” Robinson said.

For the remainder of the war, their division was in the forefront of the action. But when the war was over, they were required to return to their quartermaster units, as opposed to returning home with the infantry divisions with whom they had fought.

“We’d fought hard and many of our buddies died. They’d used us for cannon fodder, and now we were to be tossed away like an old pair of shoes,” he said angrily.

Fifty-five years later, Robinson finally received five World War II medals earned for his service in the infantry division. He cherished the Combat Infantry Badge he received upon his discharge in 1945, saying, “The rest you can have; that’s the only one that means anything to me.”

He commented, “Segregation was the order of the day, and at that time blacks were typically utilized as stewards, to wait on the naval officers. They tried to scam us by saying if we took our basic training in Bainbridge, Md., it would be closer to home, as opposed to the Great Lakes training base in Illinois. But we knew what they were trying to do and chose Great Lakes. We might have been young, but we weren’t dumb!”

The training in Illinois prepared the men for construction jobs, while later assignments taught them plumbing and welding.

Parker was discharged in 1950, and joined the Naval Reserve, but he was called back just seven months later with the start of the Korean War. The mantle of segregation reared its ugly head in Honolulu, Hawaii, as he sailed home from his tour of duty in China.

“Our ship was docked but caught fire, forcing us to remain until repairs were complete so we could continue under our own steam. That town was more segregated than anyplace in the United States,” Parker said, shaking his head as he recalled the hurtful incidents of his two-week stay there. “I’d rather be deep in Mississippi than in Hawaii. At least I knew what to expect in the South. This was such a surprise!”

Burnette, now deceased, was aware of the restrictions placed on blacks attempting to join the Navy as seamen in Buffalo. He learned that Northern cities forced blacks into the steward’s branch as cooks and waiters, while the Navy considered Southern blacks “more docile” and permitted them to serve as seamen. So he traveled from Buffalo to Memphis, Tenn., where he was sworn in. After basic training and sea duty, he was stationed at the Navy Mine Depot in Yorktown, Va.

Burnette served with distinction during World War II in the Pacific Theater and as a petty officer assisted in detecting and detonating enemy sea mines. He was discharged in 1945 and settled in Detroit, Mich.

Desiring to follow in the footsteps of his older brother, in 1946, Luther Burnette attempted to enlist at the Buffalo naval recruiting office. Unaware of the maneuvers taken by his brother, Luther ran headlong into the racial restrictions still in existence. Undaunted, he sought the assistance of an influential minister, the Rev. Elijah Echols Sr. Together they approached the recruiter, but without success. Echols asked that Luther at least be permitted to take the physical, and the recruiter replied, “OK, but he won’t pass it.” True to his word, Luther failed the exam based on flat feet. However, he then enlisted in the U.S. Army and completed infantry basic training without experiencing any difficulties.

Many veterans felt the military failed to take advantage of their abilities, and all too often, this was true. It was representative of the times when African-Americans were thought to be incapable of higher-level thinking and performance, a problem we still confront today in many situations.

Bell, now deceased, could certainly speak to that issue. Inducted in 1942, he was trained at Fort Leonard Wood, Missouri, as a combat engineer. But after six months in a field artillery battalion learning to fire the 155 mm howitzer, his unit was pulled out and sent to New Orleans, where the men were assigned to a port battalion, loading and unloading cargo from ships. Six months later, his unit was transferred to Staten Island, where the men loaded vessels heading for combat zones in the European Theater of war. His unit was segregated, and the discrimination off base was all encompassing.

Bell served overseas from 1944-46 in England and France, arriving at the Normandy beachhead on D-Day. He loaded trucks of the Red Ball Express, as black drivers risked life and limb transporting supplies to the front lines. Trained as combat engineers, the talents of these men were wasted loading cargo.

Wishing to interview a friend, I sought his experiences in the military, but he refused to talk about them because he felt that as a cook, his service was not worthy of repeating. He was ashamed of his assignment in the kitchens rather than combat duty. However, the valuable contributions of the cooks were recognized by David Barnes, a Korean War veteran, in his recollections of duty on the Korean mainland.

“While in the combat zone, we lived in tents or bunkers where a hot meal was an absolute rarity; C-rations were usually on the menu. We bathed in our helmets, if we bathed at all, and toothpaste was a luxury.”

Barnes recalls that had it not been for food coming up “from the rear,” we’d have been forced to partake of the local “delicacies,” dried squid and other fish little known to the troops. He laughed, saying, “If you breathed on anyone after eating those foods, they’d go down with the fumes!”

Barnes looked forward to the time he’d be relieved of front-line duty and rotated to “rations breakdown,” where meals were brought from the main prep area to the companies, then broken down to the smaller units of combat. He spoke fondly of “Stewart the Stove Man,” who repaired all of the stoves in the tents. “We relied on this guy to keep us from freezing to death and the cook stoves operational.”

History is written by those who tell the story. Until recently, the history of the African-American population in Buffalo has been selectively recorded, except for those who made notable contributions or performed extraordinary deeds.

The narratives of our military men comprise a large part of that history and should be captured as quickly as possible, especially as our veterans’ age, said Fern Beavers, minority veterans program coordinator at VA Western New York Healthcare System, who has been involved with her own research as well as the Veterans History Project for many years. According to statistics released by Veterans Affairs, approximately 550 World War II veterans die every day.

As we celebrate Black History Month, we should also celebrate the desegregation of our armed forces, a major civil rights victory for African-Americans.

Georgia Burnette is a retired nurse educator/administrator. She writes about African-Americans in Western New York.