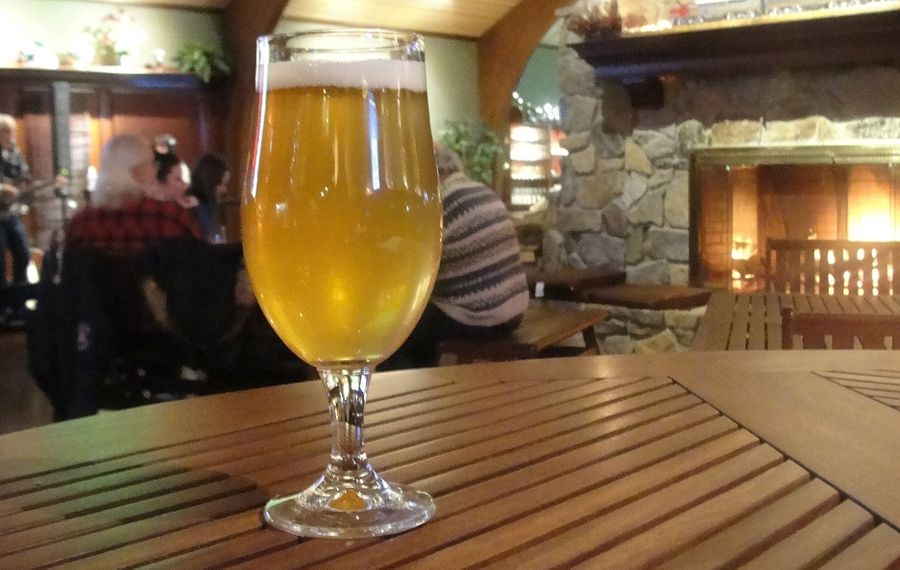 Hamburg Brewing Company has the feel like it was made for winter beer drinking.

With a double-sided fireplace larger than most Western New York living rooms, the wood-adorned tap room feels cozy despite its cavernous size and soaring ceilings. I was reminded of this on a recent Wednesday evening visit, while snow was falling outside, Doug Yeomans led live music inside, and a friend and I chatted over a couple of pints.

Photo of the inside of Hamburg Brewing Company during its first anniversary party in October 2014. (Cody Osborne/Special to the News)

Since Hamburg Brewing opened in October of 2013, one of their flagship beers has been Small Town, a Belgian-style saison, that lets the yeast take center stage with heavy floral aromas and hints of clove. While Small Town has been a staple of Hamburg’s lineup since the beginning, just recently they put a twist on the beer by aging it in oak barrels along with peaches -- two tweaks that don’t overpower the base beer, but instead complement it.

Barrel-aged Small Town with peaches pours out a hazy yellowish-gold color with a big fluffy white head. Floral aromas from the yeast, along with light clove fill the air similarly to regular Small Town, but there’s also a woodiness from the oak that comes out faintly as a toasted coconut scent. The peaches are non-existent in the aroma of the beer. The yeast comes through again in the taste, with light pepper and clove along with a hint of vanilla, and finally the touch of peach on the back of the tongue in the finish.

Hamburg Brewing Company's fireplace is a gem for craft-beer drinkers looking to stay warm in the winter. (Matt Kresconko/Special to the News)

While there could be a bit more peach character to the beer, too much could easily overpower the delicate base beer. With moderate carbonation, a medium body, and a creamier texture than regular Small Town, the mouthfeel on this is certainly one of its strengths.

A beer beside Hamburg Brewing’s fireplace is one of the best spots in the area to enjoy a drink in the winter. I recommend trying a flight of beers ($8 gets four 4-oz. pours), and including both regular Small Town and Barrel Aged Small Town with Peaches. Take your time ruminating over the gentle complexities that a touch of oak and hint of peach bring to the beer, because you’re not going to find a cozier place this winter.