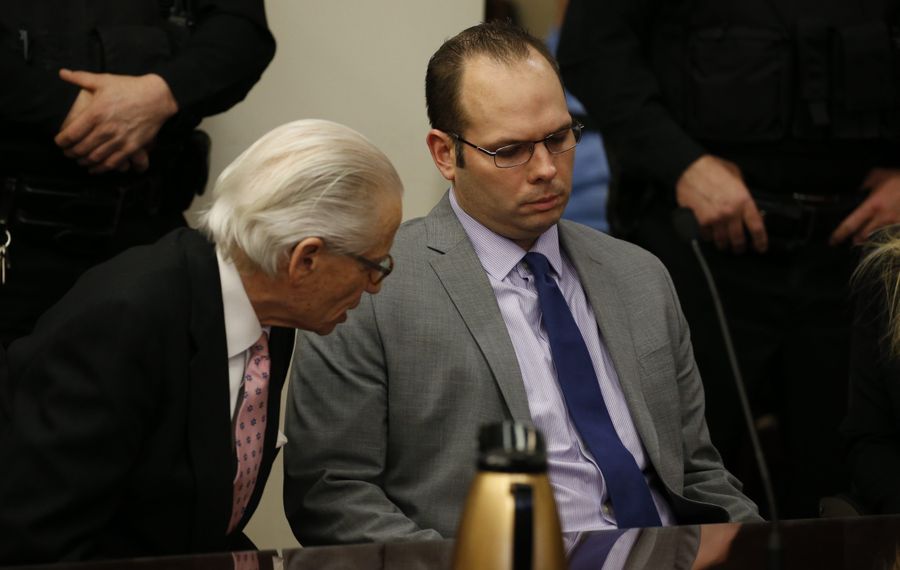 Expert testimony by a University at Buffalo physics professor was essential in persuading a jury that Molly’s Pub manager Jeffrey Basil intended to kill bar patron William C. Sager Jr. when Basil pushed him down the bar’s stairs May 11, a veteran prosecutor said Wednesday.

“It was one of the strongest pieces of evidence,” Assistant District Attorney Christopher J. Belling said after the jury convicted Basil of second-degree intentional murder in the death of Sager. He was 28-year-old Air National Guard crew chief and Afghan War veteran who had been engaged to be married last year.

Professor William Kinney testified that using basic physics formulas, he calculated that the two-handed push was delivered with 374 pounds of force as Sager stood about 3 feet from the top of the stairs.

He also determined that the victim’s body was traveling at 9 mph just after he was pushed and that he had accelerated to 17 mph when his head hit the floor, causing a skull fracture that led to his death July 31 after 82 days in a coma.

“I believe that demonstrated Basil’s intent to kill,” Belling said.

The prosecutor also cited what he called the disturbing video captured on the bar’s digital video recording system that showed Sager flying backwards down the stairs.

Another video showed Basil setting down a drink or a microphone on the bar and then moving more than 5 feet to get to Sager and give him the two-handed push.

Belling thanked Homicide Detective Salvatore Valvo for eventually finding the DVR system in a garbage tote behind a nearby house where Basil put it about an hour after the fatal incident.

The prosecutor also cited the testimony of Michael Porter Jr. , who was at the bar drinking with a friend, and Buffalo Police Officer Adam E. O’Shei, who was off duty but working security for the bar.

Both said they saw Basil deliver the push that launched Sager down the 10 steps.

Proving that Basil intended to kill Sager was the key issue in of the case.

The defense contended that the prosecution had not proven intent to kill.

The push “was done without thinking or reasoning in a fraction of a second, an impulsive act that resulted in the death of another human being,” defense attorney Andrew C. LoTempio told the jury in his closing statement Tuesday.

He said it was a case of two drunken men in a bar and one impulsively pushing the other down the stairs.

O’Shei testified that Basil told him he was on a 24-hour bender and had taken the prescription drug Xanax when he arrived at the bar that night. The officer said Basil, who was drinking double shots of whiskey, told him he was ready to party.

The defense also noted that Sager and a friend had been drinking for five hours at a stag party at a Hertel Avenue bar and for another hour at a lounge before they arrived at Molly’s.

Belling cited two calls Basil made to a friend and his father from the Erie County Holding Center at the end of May, in which he said he was not drunk that night, as well as witness testimony that Basil did not appear to be drunk.

Basil, 36, of Amherst, also was charged with first-degree manslaughter with intent to cause serious physical injury resulting in death.

The jury returned the murder verdict at around 2 p.m. after deliberating for about seven hours over two days. It also convicted Basil of tampering with evidence for removing the DVR from the basement office and putting it in the garbage tote.

Basil stared straight ahead and showed no emotion as the jury announced the verdicts.

Basil’s father and mother also showed no emotion and left the courtroom without commenting.

William C. Sager Sr. and his wife fought back tears but had no comment. The victim’s fiancée, Erika Webster, also left the courtroom without commenting.

Belling expressed sympathy for Sager’s family and fiancée. “They have lost an irreplaceable part of their lives,” he said.

“We are disappointed, of course, and frankly surprised,” he said of the verdict, adding that he had expected a conviction on the first- or second-degree manslaughter charges.

“We had a narrow defense, and the jury just didn’t go along with us,” he added.

One veteran defense attorney, Joseph Terranova, said the verdict did not surprise him.

“I was betting on that verdict,” he said. “I felt the prosecution proof went in really well. Basil looked like a thug. To say he was too drunk to know any better but cogent enough to go down and remove the DVR doesn’t make sense.”

Terranova said he felt Basil’s only chance to avoid a murder conviction was to testify in his own defense that he didn’t intend to kill the victim.

“You’ve got to get up there and lay yourself out and beg for the lesser included charges, but he didn’t seem like the personality type to do that,” he said.

Both Daniels and Belling were asked if they thought the verdict might have been different if Buffalo Police Officer Robert E. Eloff, who was also off duty and working security that night, had been allowed to testify.

Daniels had subpoenaed Eloff to testify, but Eloff, who was not granted immunity, refused to answer any questions, citing his Fifth Amendment right against self-incrimination.

The judge ruled that Eloff should not be called as a witness because she said his refusal to answer questions would lead to speculation among jurors.

Daniels said he didn’t know what effect Eloff’s testimony would have had on the jury.

Belling said he didn’t think Eloff’s testimony would have affected the verdict.

In his closing statement, Belling called Eloff “a no good, despicable dog” who was not offered immunity because he faces possible federal charges for his actions that night.

The jury was shown video of Eloff handcuffing the unconscious Sager after Basil said Sager had assaulted him and should be arrested. The jury also saw video of Eloff and O’Shei accompanying Basil to the basement office before the DVR was removed.

Both officers have been suspended, pending an investigation by the Buffalo Police Department Internal Affairs Division.

Basil’s murder trial attracted heavy media coverage and is the latest in Daniels’ long list of high-profile cases, which includes his winning an acquittal of all the felony charges that Dr. James G. Corasanti faced in his hit-and-run and manslaughter trial in 2012.