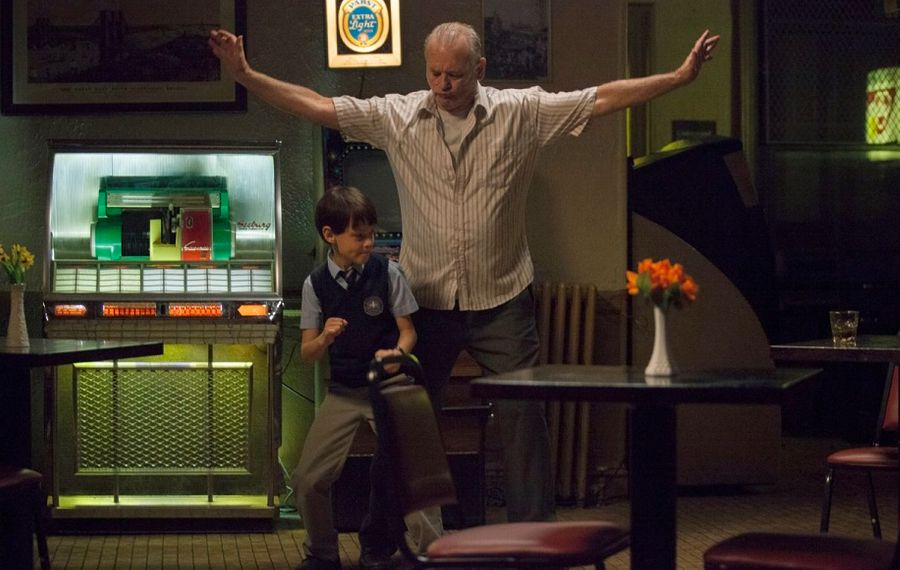 The best thing, by far, about Theodore Melfi’s decent comic tearjerker “St. Vincent” is that Bill Murray is the one filling the Bill Murray role, not Michael Douglas.

If you can somehow remember Rob Reiner’s “And So It Goes” – the worst titled movie of 2014 – Douglas played the sour, snarling old geezer finding his humanity while caring for a preteen kid. Sure, sure, sure, the kid was supposed to be Douglas’ grandchild in “And So It Goes.” And the movie added Diane Keaton as a neighbor who also was crucially humanized by the plight of a very needy kid – so much that she and the sneering geezer found themselves hooking up in their newfound engagement with a vulnerable member of the youngest generation.

The two movies, otherwise, seem to share immediate family DNA – except that, as in some families too, the newest one, “St. Vincent” is so much better.

And that’s because Murray with his big, doughy face and professional life of highly peculiar removal from the general run of Hollywood values, is so much better at being a scowling and misanthropic reprobate than Douglas.

Not that Douglas didn’t have conspicuous fun playing that sentimental old wretch. But, he’s the son of a mammoth Hollywood star, Kirk, just as his director, Rob Reiner, is the son of a great American showbiz comedian, Carl. Hammery is hammery.

“St. Vincent” comes from somewhere else – an authentic engagement with a working-class neighborhood where people are making do the best they can and clinging desperately to whatever they once had that passed for luxury in their tenuous lives.

In fact, when you first see and hear Murray in this movie, he looks and sounds a bit like Brian Doyle Murray, his comic character-acting brother, a much less weirdly sympathetic figure than Bill Murray has become in American movies.

The comic we all love is Bill Murray, i.e. Meatball No. 1, the royal screw-up in “Stripes” who gets his buddies to do virtuosic parade maneuvers by getting them to groove to Sly Stone’s “boom-a-lacka-boom-a-lack-a-boom-a-lacka-BOOM.” He’s the Ghostbuster who represents the intrinsic authority of slobs everywhere who don’t give a fig.

Heaven help us. Murray may be our Everyman. As Creedence Clearwater Revival might have put it, he’s no “Fortunate Son.” He wasn’t born to star in and direct movies. It just happened.

Murray was born to play guys who drink too much, play the ponies, have sex with pregnant Russian hooker/strippers and drive around in a maltreated, vintage wood-paneled convertible that should have been treated as if it were solid gold.

Murray has, in fact, been a great cinematic Everyman in the last decade. Who cares if he didn’t rake in the same bit of box office dough that he once did? Just look at what he did for Sofia Coppola as a melancholy Everyman movie star in “Lost in America” and for Jim Jarmusch in “Broken Flowers.”

You can bet the farm that while his business manager isn’t thrilled, he’s happy as a clam to be making grand movies about recognizable members of the human race.

Would you believe that this may be one of the best things as an actor he’s ever done?

One look at Murray’s big broad face battered and bruised from barroom battling and you’re suddenly hit with the force of revelation: Ahhh, you might well say, that’s the way this conniving loser should have looked all along.

Except that he’s a bit of a secret sweetheart in “St. Vincent.”

When, in the middle of his hooker-mongering, scabrous railbird life at Belmont Racetrack, a new neighbor (Melissa McCarthy) shows up with a skinny, polite 12-year-old kid, he offers to baby-sit after school for as long as it takes his medical technician single mother to get off work.

A ridiculous idea, of course. But not at the movies. What else could be better for a shy, unhappy, lost kid at a new school than a retired SOB with little good to say about anyone or anything except for his favorite pregnant Russian hooker? (To whom he’s in debt, as he is to almost everyone else too. The ponies, you know.)

Of course, our boy Vincent will take the 12-year-old kid along with him to all the rotten places no one his age should frequent. And, of course, he’ll teach the kid how to break the nose of his school’s most pitiless bully. If that’s all the other kids understand about manhood, then a giant, oversized baby like Vincent is just the right mentor for a bullied kid.

There’s something else about Vincent. That beautiful old woman, for instance, whom he goes to see in an assisted-living center – a woman who never recognizes Vincent and always thinks he’s her doctor even though he holds her hand and smiles at her like a lover.

Vincent, as the actors like to say, has layers.

Nor is that all. He has illness, too, before it’s over. And lots more things for Murray the actor to chew on.

He’s the best thing about the movie. McCarthy as the kid’s mother and Naomi Watts have juicy supporting roles, but it’s all Murray’s film with an able assist from Jaeden Lieberher as the kid who never stops calling his baby sitter “sir.”

In his senior years, Murray gets the job done. But then he usually did.

Rating: PG-13 for language, some sex and mature thematic elements.

The Lowdown: Sour, disreputable old man baby-sits for the sweet and polite young son of the newly separated medical technician next door.