Over the last 20 years, Buffalo hockey fans have grown accustomed to being able to see on TV just about every game the Sabres play. MSG, Empire Sports Network and Niagara Frontier Sports Network have each been the cable television home of Sabres broadcasts, dating back to the Ted Darling era.

The number of Sabres games on TV grew from a handful after the Sabres ownership group purchased WNYB-TV in 1987. Before then, it was WUTV-TV Channel 29, which might carry 20 or 30 games, or Channel 2, WGR-TV (and WGRZ-TV, after the call letters were changed in 1983), with Sports Director Ed Kilgore as a part of the broadcast team.

When the Sabres first entered the NHL in 1970, a handful of local games in the earliest seasons were carried on WKBW-TV, with Channel 7’s sports director, Rick Azar, as a part of the broadcast team. 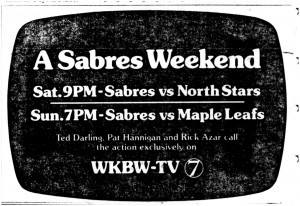 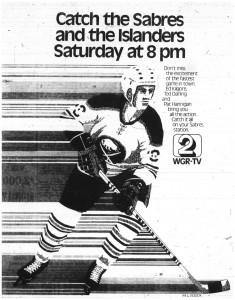