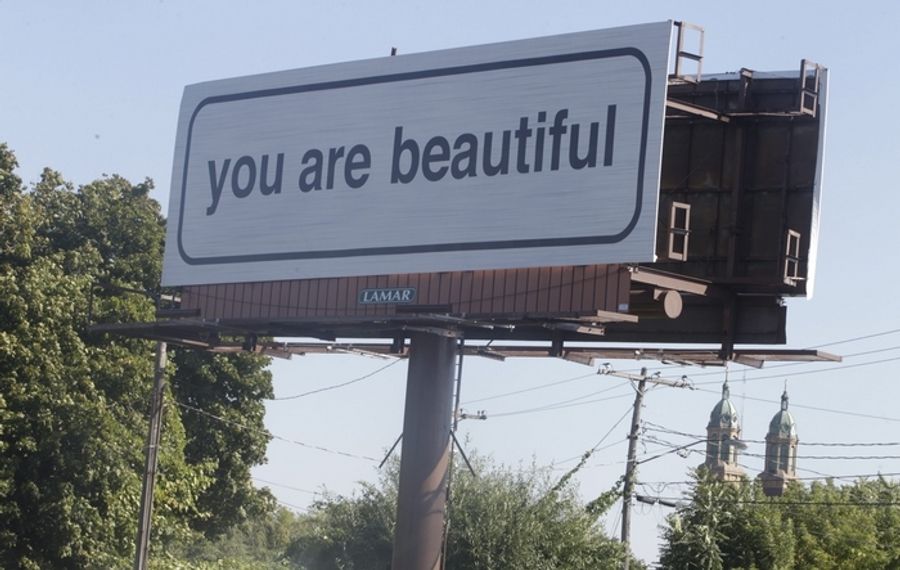 Now starring on a billboard in your neighborhood: You.

Or, more specifically, a message custom-tailored to boost your self-esteem and brighten your day, spelled out in bold, lower-case Helvetica letters: “you are beautiful”.

The feel-good billboards, which are now popping up along area highways and thoroughfares, are part of a new public art project organized by Albright-Knox Art Gallery and sponsored by Lamar Advertising. Those three potent words, the trademark phrase of Chicago-based artist Matthew Hoffman, will appear on 44 large and small billboards throughout Erie County through December.

The billboards are the third project in the new Public Art Initiative, a collaboration involving Albright-Knox, Erie County and the City of Buffalo designed to bring new large-scale public art projects to a region that has long been starved for them. The initiative has already been extraordinarily successful, with projects by the Rhode Island-based Tape Art collective at the Central Library and Cincinnati artist Casey Riordan Millard’s “Shark Girl” at Canalside drawing enthusiastic responses from Western New Yorkers in person and on social media.

Hoffman’s “You Are Beautiful” project was the first one he presented to the gallery’s new public art committee, said Aaron Ott, Albright-Knox’s public art curator. He said he was immediately drawn to the positive and unironic nature of Hoffman’s career-defining statement.

“One of the aspects that I find really interesting and endearing about the project is the flexibility of the phrase,” Ott said. “It can be somebody saying to another individual, ‘You are beautiful,’ and you can sort of internalize that yourself. Or it can be an institution or an individual saying it to a collective, a space, a landscape.”

The project is already starting to raise eyebrows, said Rick Dvorak, a vice president and general manager at Lamar. The message will appear on 11 smaller billboards along secondary routes like Delaware Avenue and Sheridan Drive and four larger billboards along major highways per month. When companies buy advertising space, Lamar will shift the message to other empty billboards elsewhere in the county, ensuring that it will be widely seen.

“I think it was a great project to display the artwork around the city and to promote the Albright-Knox,” Dvorak said. “We’re already starting to get some feedback from it, so I think it’s going to be pretty visible out there in the marketplace.”

Hoffman began his career-defining project a decade ago, cranking out thousands of “you are beautiful” stickers and gradually building up a strong grassroots following. Several installations, including a popular billboard placed along Chicago’s Lake Shore Drive, followed. Since it launched in 2002 – the same year Christina Aguilera’s song “Beautiful” was released – Hoffman’s project has pumped out more than a million stickers and is now drawing international attention.

For Ott, the project provides the perfect opportunity for those who might be intimidated or disenchanted by the art world to have a one-on-one interaction with an artwork without the baggage that sometimes comes with a trip to the art gallery.

“Contemporary art can be really intimidating for a lot of people. They’ll come to it with their shields up and with a set of presumptions that are unfortunate. They’ll think that they’re not smart enough,” he said. “I think that when people are given the space, they really have a lot of great things to say about contemporary art. And one of the great things about public art is that it facilitates that conversation and makes it a lot easier because there’s no white walls bounding it and people can just come and go.

As projects spring up on billboards, public parks and building walls, the intimidation factor seems to be diminishing by the week.

“The atmosphere is really changing here in Buffalo about public art. Just the organic conversation about ‘Shark Girl’ is proving that,” Ott said. Erie County residents, he said, are not “busying themselves having some sort of critical conversation about, ‘Do I like this art or do I not?’, because they’ve actually moved past that immediately into, ‘I like this.’ ”