Anne Bunis started the Sample Shop in the front parlor of her Hertel Avenue home in 1929.  Sixty years later, the 88-year-old watched her company open a store in the Walden Galleria.

“Recently opening a new store in the Walden Galleria Mall, and getting ready to celebrate the 60th anniversary of the business this September, Anne Bunis said she never anticipated the Sample Inc. growing into an 11-store chain as it is today.” 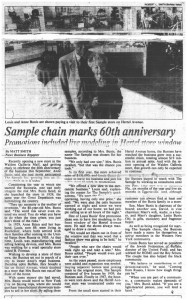 Even as the 60th anniversary of the chain was being celebrated 25 years ago today, the end was in sight.

The three remaining Sample stores were ordered closed by a bankruptcy judge in 1990.

In 1993, the flagship store on Hertel Avenue was razed to make room for a senior apartment complex.

As noted in a 1990 editorial, the loss of the Sample to Hertel was as big a blow to the neighborhood as the loss of Sattler’s was to Broadway-Fillmore.