Mayor Frank Sedita took to the streets, reporter in tow, to declare "war on filth and rubbish.”

Using words like “disgraceful” and “festering sores,” Sedita was unhappy with the few neighbors who were bringing blight to the otherwise well-maintained neighborhood on Elmwood Avenue between North and Allen streets.

“ 'Get your inspectors out here. Cite the owners. They’re going to fix these conditions or wind up in court,’ said (Sedita).” 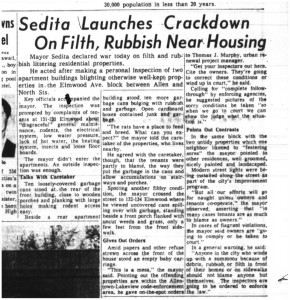