Streets Department employees were accused of conspiracy in the alleged hiring of "no-show" employees and then in the alleged covering up of the fact that, for three years, an Ash & Garbage Division employee never showed up for work.

"A 'no show' employee was on the city payroll for three years before he learned what he was supposed to do and what door he was supposed to enter to get to his non-existent job, according to testimony given today in the State Supreme Court trail of Cyril O'Connell." 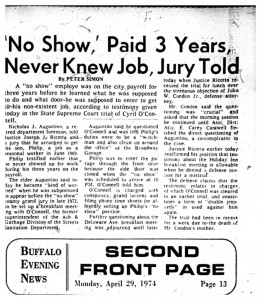