"Dr. Clark hurled for Buffalo in the International League in 1924. Today, he is proud of the achievement of his son, Bill, 16, a sophomore at Amherst Central School, who, for the second time in as many years gained credit for the season's opening no-hit, no-run game." 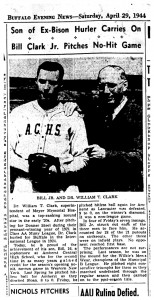