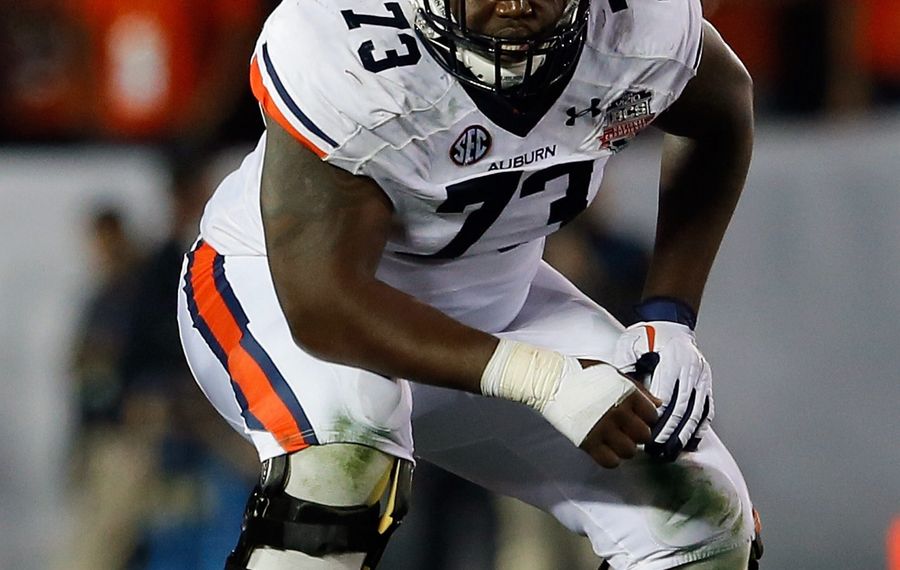 This is the fourth of an eight-part series previewing the NFL Draft on May 8-10. Today’s installment: Offensive linemen.

They may not go first and second overall like in the 2013 NFL Draft, but the top two offensive linemen in this year’s class won’t have to wait long to hear their names called next month.

Auburn’s Greg Robinson and Texas A&M’s Jake Matthews are both widely considered to be sure-fire picks inside the top 10, leading a class of offensive linemen that could see as many as six or seven players picked in the first round.

Last year, six of the top 11 picks were spent on offensive linemen – with a pair of left tackles in Central Michigan’s Eric Fisher and Texas A&M’s Luke Joeckel going first and second, respectively, to Kansas City and Jacksonville. Two guards even went in the top 10 a year ago – North Carolina’s Jonathan Cooper at No. 7 to Arizona and Alabama’s Chance Warmack at No. 10 to Tennessee. That won’t happen this year, as any interior lineman selected would be near the bottom of the first round, if it happens at all.

Robinson or Matthews could go as high as No. 2 overall to St. Louis, while the Atlanta Falcons at No. 6 have also been a popular landing spot for either one of them in most mock drafts. The Buffalo Bills already have a star in the making at left tackle in Cordy Glenn, but could see Robinson, Matthews or even Michigan’s Taylor Lewan as an upgrade over Erik Pears at right tackle.

His salary, however, would not preclude the team from keeping him on the roster, even in a backup role in the event the team drafted a tackle at No. 9.

“I think the safest pick on the offensive line is Jake Matthews,” said NFL Network draft analyst Mike Mayock. “He’s already a professional. He’s got a skill set, you plug him in day one and he’ll play at a high level. I think Greg Robinson from Auburn might have the highest upside of any of the offensive lineman in this draft, but he’s not quite as polished as Matthews or Taylor Lewan. Taylor Lewan gets a little top heavy at times, but he’s got a nasty finish. I think he’s very similar to Fisher and Joeckel from last year when they were the first couple picks.

“So I think all of those guys are worthy of top 10 picks, and I think Robinson is the one with the highest upside but also the one you’ll be the most concerned about because he’s a little bit more raw.”

The next wave of offensive linemen begins with Notre Dame’s Zack Martin. At 6-foot-4 and 308 pounds, with 32≥-inch arms, there is some question as to whether he’s big enough to stay at tackle in the NFL, or would be better suited moving inside.

“His versatility, his durability – this guy didn’t get hurt – he can play multiple positions,” ESPN draft analyst Mel Kiper Jr. said of Martin, rolling off his positive attributes one after the other. “He’s got a great attitude, and he’s technically sound.”

Martin played 52 career games at Notre Dame – the most in program history.

Another pair of offensive tackles – Virginia’s Morgan Moses and Alabama’s Cyrus Kouandjio – have the potential to go in the first round. Kouandjio failed multiple physical exams by teams at the NFL Scouting Combine, according to a report from NFL.com, because of complications following knee surgery, but has still landed in the first round of several mock drafts.

The reason for that, at least in part, could be the way teams are viewing the importance of right tackles.

“The old days, the defense always lined their best pass rusher up against the left tackle with the theory it’s the blind side of the quarterback, the offense would have to protect the blind side,” Mayock said. “Now we are seeing defenses get much more creative, moving guys around, trying to get mismatches wherever they can, overload wherever they can. Sometimes they will put somebody over against a left tackle that they know can’t win because they don’t care. They will figure ‘we will try to overwhelm the right side.’ ”

The Bills to date have hosted Matthews and Mississippi State’s Charles Siddoway on pre-draft visits. Siddoway, who finished his college career with 25 straight starts at right tackle, is expected to be taken on the draft’s third day.

Tennessee’s JaWuan James and Antonio Richardson, North Dakota State’s Billy Turner and Ohio State’s Jack Mewhort are all tackle prospects who could be available to the Bills in either the second or third round. ESPN’s Todd McShay projects James to the Bills in the second round in his latest mock draft.

The interior of the offensive line lacks prospects like Cooper and Warmack from a year ago.

“I think none go in the first round,” Kiper said of offensive guard prospects. “I think David Yankey from Stanford goes in the second. Brandon Thomas, former offensive tackle at Clemson, projects inside, he’s a guy that’s climbed up the board probably a couple rounds since the end of the season.”

Nevada’s Joel Bitonio – who played under St. Francis graduate Brian Polian with the Wolf Pack – is similar to Martin in that he played tackle in college, but may be best suited for guard in the NFL. Bitonio is a 6-4, 302-pounder who served as a team captain and started 38 games. He’s a likely second-round pick.

The top-rated pure guard in the draft is UCLA’s Xavier Su’a-Filo. The redshirt junior is a 6-4, 307-pounder who might sneak into the bottom of the first round.

Canisius High School product John Urschel, who played collegiately at Penn State, is the 15th-ranked guard according to CBS Sports, and projects as a third-day selection.

The top-rated centers are Colorado State’s Weston Richburg and Southern California’s Marcus Martin, both of whom project as Day Two picks.