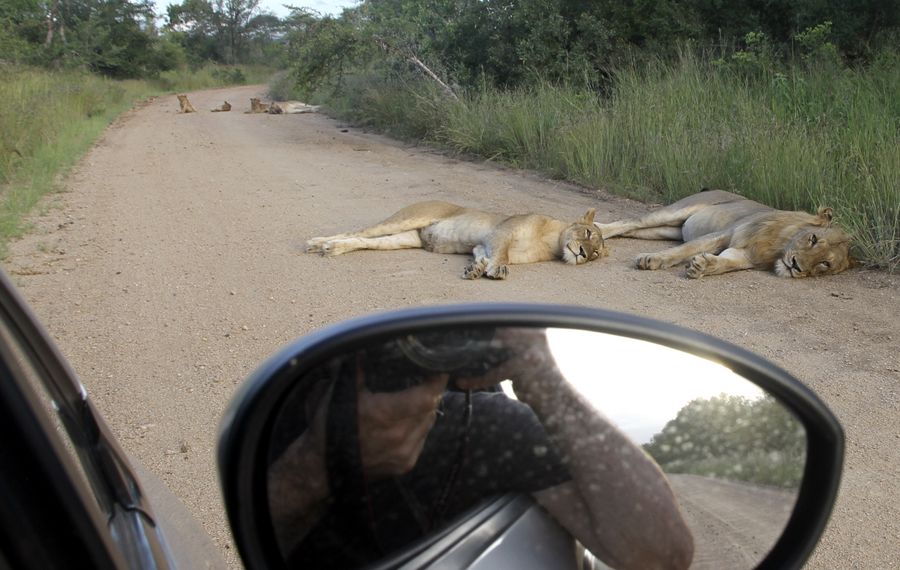 It was a daunting challenge for a lone traveler in the African bush: Using only a tiny $23-a-day Fiat and my wits, I had to sneak around the six sleeping lions blocking the gravelly road ahead.

Much as I wished I could watch them for an hour and then double back, I was late for curfew at Crocodile Bridge Rest Camp, 15 miles ahead, and at South Africa’s Kruger National Park in February, vehicles must be off the roads by 6:30 p.m.

The prudent approach seemed to be to inch forward, slowly. If a Fiat could tiptoe, this is what it would look like.

The two closest lions kept on snoozing, ribs heaving so rapidly they must have been racing after a delicious impala in their dreams. Then, at 10 feet, the female jumped up and stared straight at me. Juggling my camera, the steering wheel and the (left-side) stick shift, I hastily backed up and was edging forward again when, heart pounding, I realized my window was open.

When most people imagine their bucket-list African safari, they’re in the back of an open 4x4, nothing to worry about but their cameras, as their expert guide keeps an eye out for cheetah tracks and rhino dung. Then it’s back to the luxury lodge to doff their pith hats, enjoy a sundowner and relive the day’s sightings.

Such comfort is far beyond the scope of many travelers, and certainly of the Frugal Traveler. But as South Africans already know, there’s a cheaper alternative. By driving yourself, cooking for yourself and camping, you can do Kruger for around $100 per couple per day, including everything but airfare. Prefer a bed? Reserve a “safari tent” instead and make that $120.

The self-drive safari wasn’t the only cheaper alternative during my 16-day trip to southern Africa in February. I chose the simple charms of a $14-a-night mountain camp in Swaziland over the usual draws of that tiny monarchy – the touristy attractions in the Ezulwini Valley, home to its polygamous King Mswati III. I stayed in feisty Durban instead of its famously dazzling cousin up the coast, Cape Town.

The result was perhaps rougher than a traditional itinerary – traveling in Africa can often be a challenge – but also more rewarding, and rarely lacking excitement.

Where was I? Ah yes, facing a ferocious lion with my window wide open. I rolled it up and temporarily backed away. Now that everyone was awake, I drove through, hugging the opposite side of the road as the lions trotted into the bush. My heart continued to pound as I replayed the scene again and again. That lasted about two minutes, until three giraffes ambled onto the road in front of me.

It was the closest encounter I had with wildlife but not by much. With no guide and using only maps, tactical advice from a whiskey-drinking Afrikaner in the tent next to mine and (when cell coverage allowed) the occasional tweeted tip, I saw thousands of impala, hundreds of zebras, dozens of elephants and giraffes and blue wildebeests, six white rhinos and plenty of half-submerged hippos. Then there was a troop of baboons, some with babies hanging from their underbellies or riding piggyback, that took over the road like a swarm of locusts.

Friends who heard I’d be camping in a game reserve had alternatively romanticized it (“Sleeping under the African sky, epic,” one wrote me) or imagined me trampled by elephants. But really, the two spots I camped in were not unlike those I’ve stayed in in Sweden or New Zealand. I set up my two-man tent among friendly Afrikaners who invariably had far more luxurious setups. On a third night, I opted for a safari tent, a rustic but permanent structure with comfortable twin beds, a porch and refrigerator.

In Swaziland, I eschewed the standard itinerary – game parks, casinos and the Ezulwini Valley, home base of the monarchy – in favor of Shewula Mountain Camp, in the country’s far northeast; it had been highly recommended by someone I met in Kruger as a rustic resort run by villagers with a very light touch. The price was light, too – 150 rand for a dorm bed in a rondavel, a modernized thatched roof structure. (The Swazi lilangeni is pegged to the rand and both are accepted all over the country.)

It took just minutes to like Swaziland. First, there were the infinite shades of green, sometimes layered one upon another in the same panorama, from the yellow-green of withering sugar-cane leaves all the way to the deep, shadowy green of distant mountains. And then, turning up the 10-mile rutted, burnt-orange dirt road that led through Shewula village to the camp, things took on a surreal look of another time: Children waved as I passed a mix of traditional thatched houses and more modern concrete structures.

Of course, what you see is rarely the full story. I was not surprised to hear from Kayise, the woman who greeted me at the camp, that the village was very poor and ravaged by AIDS.

The mountaintop camp itself was tidy and modest – until I got to its edge, where I found a sweeping view of mountains and valleys stretching out below. Saving two of the camp’s few activities (a 100-rand traditional dinner of chicken and peanut sauce and a 40-rand village tour) for the next day, I decided to simply wander into the village.

Just a couple of minutes down the road, I came across a field of kids in a full-scale pickup soccer game. They practically pulled me into the game; I handed my camera to a 14-year-old named Myeni, showed her how to shoot video and made my first appearance as a goalkeeper in 18 years.

I had chosen coastal Durban as an alternative to Cape Town because it was supposed to be less beautiful but more diverse and friendlier. I am always wary of entire populations being described as friendly, but in the day and a half I spent there, a stranger bought me a beer during lunch, a taxi driver abandoned the cab line to lead me to his favorite local restaurant, and even a convenience-store clerk – often the surliest of professions – perkily asked where I was from and wished me a good stay.

Durban’s main attraction is the Golden Mile, a strip of beaches and piers linked by a palm-lined, runner- and biker-friendly promenade. Although it lacked the sheer beauty of the Cape Town coast, it was a world to itself. Nowhere is the city’s diversity – blacks and whites and Indians and Muslims and tourists – more evident. Joggers in tank tops and running shorts breezed through, a woman in a hijab trotted after her daughter in a summery red dress, Indians crowded the boardwalk restaurants, a leather-skinned middle-age white surfer emerged from the water, a black soccer team trained on the sand.

There were downsides to taking the alternative route. I found out later I had missed Swaziland’s Marula Festival, which celebrates its namesake fruit and the “beer” made from it, at the very royal residence I had purposefully avoided.

But as for finding yourself utterly alone on a winding dirt road, eating your lunch as the rhinoceros 10 yards ahead eats his, I’m not sure there’s an alternative to that at all.