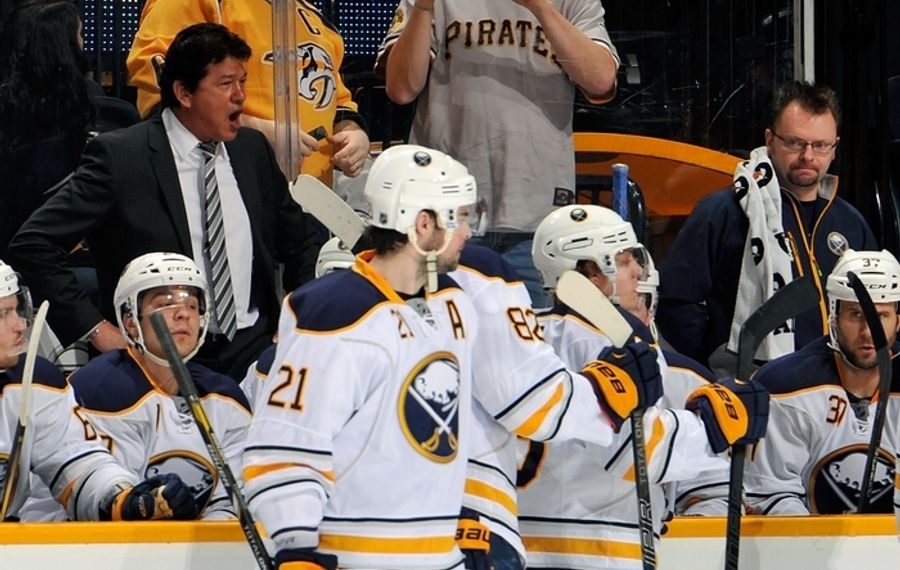 NASHVILLE, Tenn. — It’s been a season of misery for the Sabres right from the start. They’ve sunk so low and experienced so many disappointments that nearly everyone figured they’d reached rock bottom.

Then came the first period Thursday night in Nashville. Let’s replay it by the numbers, shall we?

4 – Goals scored by the Predators.

8 – Seconds between Buffalo penalties for too many men and delay of game, setting up a five-on-three goal for Nashville.

11 – Saves by overwhelmed goaltender Matt Hackett, who wasn’t forced to play the second and third periods.

12 – Predators who reached the score sheet.

58 – Seconds played by Ville Leino, who left after feeling lightheaded.

16,729 – Fans in Bridgestone Arena who received a free dessert from a fast-food chain because Nashville reached its magic goal total of four … in just 19:17.

Somewhat surprisingly, the Sabres came back out following the first intermission. After spotting Nashville the 4-0 lead, Buffalo’s 10th loss in 11 games was a given. The Predators finished them off, 6-1. The Sabres have been outscored 34-12 during their 1-10 slide.

“It was very disheartening and very discouraging the way the guys came out,” Nolan said. “They didn’t even come out to play in that first period.”

The Sabres started circling the drain with 6:26 gone when Colton Sissons scored on a rebound for his first NHL goal. Colin Wilson, who hadn’t scored since Dec. 30, made it 2-0 with 11:44 off the clock.

By the time the Sabres looked up at the scoreboard, a wide-open Calle Jarnkrok made it 3-0 with his first NHL goal. Nolan called his timeout and berated the squad.

“We shouldn’t need him to wake us up and get us going,” defenseman Christian Ehrhoff said. “It was pretty ugly. We got what we deserved, four goals down in the first. That’s unacceptable. Definitely one of the low points.”

Rookie Nicolas Deslauriers showed some fight by dropping the gloves, but penalty-plagued Buffalo resumed its parade to the box. Shea Weber scored with 43 seconds left in the period to put an exclamation point on the early debacle.

“I don’t even know what to say,” Sabres center Cody Hodgson said. “We’ve had some low moments, but that was tough.”

The teams were even on the score sheet in the second period as the Sabres’ Rasmus Ristolainen and Weber traded pinpoint blasts. Nashville’s Eric Nystrom closed the scoring with 39.3 seconds left on relief goalie Nathan Lieuwen.

Leino played two shifts for the Sabres. He had a 49-second run during the opening three minutes, then had a nine-second shift with 4:30 left before departing for the dressing room. Leino ignored a request for comment on his way toward the team bus.

“Ville, he got a little lightheaded in the first period, so they took him out of precautionary reasons, did some testing on him,” Nolan said. “I’ll have to talk to the medical guys to see what the exact problem was, but he just wasn’t feeling very good.”