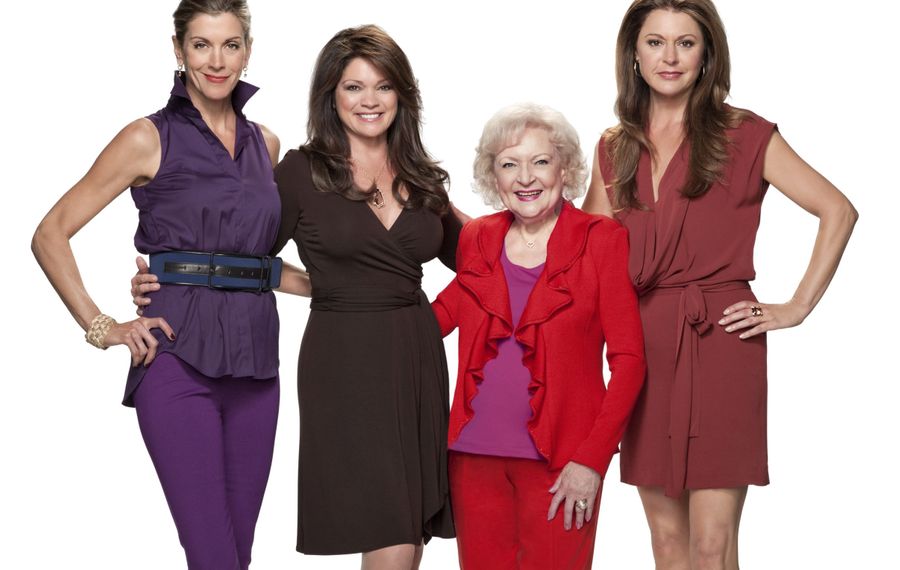 “Hot in Cleveland” begins its fifth round the same way it came back in the middle of its fourth, with stars Valerie Bertinelli, Wendie Malick, Jane Leeves and Betty White performing the episode as viewers see it (in the Eastern half of the country) tonight. Immediately after, Season 3 of the “Cleveland” spinoff “The Soul Man” will debut the same way, with Cedric the Entertainer and his cast also going live.

Linking the halves of the event, White and Cedric will appear in both series, to be shown on tape on the West Coast but with no modifications.

“Hot in Cleveland” normally is done in front of a studio audience, as was the comedy that made Bertinelli famous, “One Day at a Time,” but she confirms that the live-telecast aspect doesn’t mean less nerves.

“Oh, heck, no,” she says with a knowing laugh. “The jitters already started a month ahead. I love it because the energy is amazing, and then the show is done, then there’s just fun afterward, but it’s a little heart-pounding while you’re doing it.”

“There was one moment where Wendie had to get from one set to the next within 5 seconds, literally, and you could hear her running in the background to try to get to her entrance in time,” she says. “It was actually quite funny, and it was hard for Jane and me not to giggle. Then at the end, we all just let go and had a big smile on our faces.”

Moreover, “the script was written as a farce,” Bertinelli reports, “so timing was everything. We didn’t have the luxury of really messing up, because it would break all the timing of each joke. I have a feeling that this time, if there are moments that give us the giggles, they’ll let that go to see what happens. I think most people were disappointed that we didn’t mess up.”

According to Bertinelli, White remains the engine that powers the train on live-show nights.

“She’s her own animal, just a freak of nature, bless her,” Bertinelli muses. “There is no way we can ever complain about anything – then again, why would we? – because that woman works her butt off.

“She’s always going over her lines, being the ultimate pro. I’ve said this a million times and I’ll say it a million more, but it’s like being in a master class with the best comedian ever. The woman knows what she’s doing, and I’m just really holding onto her wings and trying not to let go.”

Continuity is an extra challenge for the live “Hot in Cleveland” episode, since the cast already has filmed several new-season stories that take place later. Moreover, those involve developing plots, such as Melanie’s pregnancy that was revealed in the Season 4 finale.

“It’s interesting to have this as a stand-alone show,” Bertinelli confirms of the live episode, “because we can’t really talk about anything else. It was confusing for us last year, too, because we had finished shooting the season in April, and we came back in June to do the live episode, which was the first episode of the last half of the season, so we were all discombobulated. Maybe that’s a good thing.”

The live show isn’t the only special occasion slated for Season 5, since another episode will be largely animated, taking the ladies on a global journey and sending up such entertainment ventures as “The Walking Dead” and “Willy Wonka and the Chocolate Factory” in the process.

“I was so excited,” Bertinelli says of getting the news that episode would be done. “Animation is so much fun, with all the talent that goes into it.

“The (‘Cleveland’) story is live action that goes into animation, and working on that has been kind of good, because it’s made me not think so much about the live episode,” she said.

It’s not the first time Bertinelli has done a cartoon voice: She spoke the words for a version of herself named “Valerie Bertandernie” on Fox’s “Family Guy,” but she laments never being asked back by creator-producer Seth MacFarlane, though the character continued, voiced by others.

“I think I was going through my divorce” from Eddie Van Halen, Bertinelli reflects, “and I was just not happy about anything. I probably didn’t make the best impression on Seth, so I probably ruined my relationship with him, and I’m a little disappointed – actually, a lot disappointed – about that. He didn’t really get to know the ‘me’ me, just the miserable me at that time. I really wanted to go back and do more ‘Family Guy.’ ”

Being such a haven for familiar faces, TV Land has sent a parade of famous guest stars through “Hot in Cleveland.” Carol Burnett, Mary Tyler Moore, Shirley Jones, William Shatner and Regis Philbin are just a few who passed through the show last season.

Bertinelli is pleased to work with so many home-screen veterans, including her regular “Cleveland” co-stars.

“I’m the lucky one who keeps trying to dog-paddle behind them and learn from them,” she says. “I’m just trying to stay afloat.”

Another measure of the series’ success is its launch in syndication this fall, giving it the potential to be seen beyond the home it’s always had at TV Land.

“I’m in my 50s,” Bertinelli says, “and I never thought I would get a show this good this late in my career. Women my age don’t get this kind of opportunity a lot, so all of us feel so blessed and so happy to be working on this.”