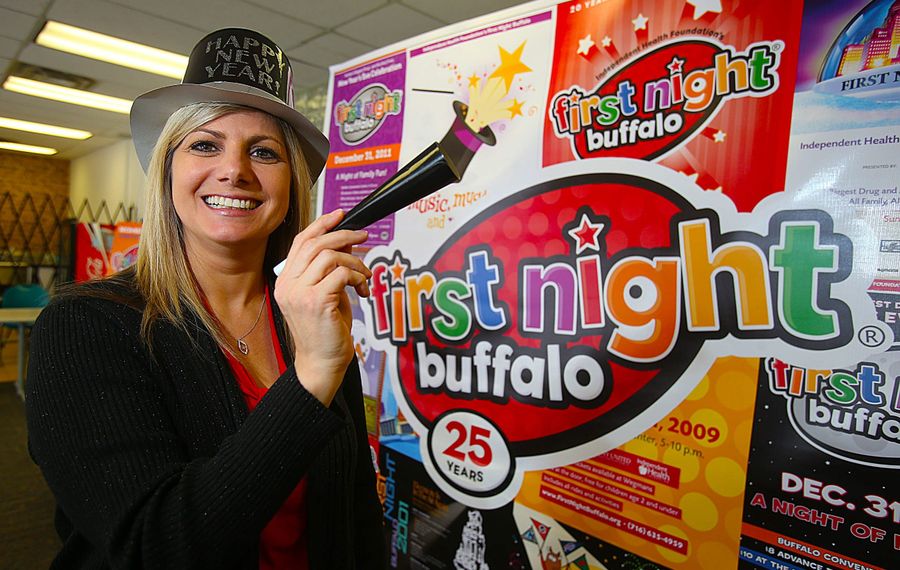 Carrie Meyer was a hairdresser when she decided to go to college and launch a different career. She since has helped launch thousands of Western New York families into the new year.

Meyer, 43, executive director of the Independent Health Foundation, has been a force behind First Night Buffalo since she landed a job with the foundation in 1995, fresh out of Hilbert College.

She, her husband, Jim, and their children, Jimmy, 24, and Brooke, 17, all have helped with the event, which marks its 25 anniversary Tuesday night.

“I started working here before I had my daughter, so my daughter has grown up to it,” Meyer said. “My son was 5 years old back then and has come to every First Night since. Now, both my children are volunteers. They’re very involved in setting up and preparing, and having input into what sort of entertainment we should have.”

The Independent Health Foundation was started in 1992 to run First Night, when the event became too big to handle for its founding organization, Western New York United Against Drug and Alcohol Abuse. That nonprofit continues to play a role in the event, which this year will take place from 5 to 10 p.m. New Year’s Eve in the Buffalo Niagara Convention Center, 153 Franklin St.

Meanwhile, the foundation has continued to grow under Meyer’s leadership and now is involved in more than 100 events annually across the region, including seven “signature” programs and events: First Night Buffalo, Kids Run, Fitness for Kids Challenge, Serving Up Success, Soccer for Success, Good for the Neighborhood and Healthy Options.

What are you key responsibilities for First Night?

Raising the sponsorships, building the partnerships. For example, with partnerships this year we have a multicultural stage, and we want to showcase all the different cultures around Western New York. So I’ve made relationships with the African American Cultural Center, the Buffalo Native Resource Center, the Hispanic Heritage Council of Western New York. I don’t only focus on what they can provide at First Night. I talk about all the signature programs the foundation offers in the community. It opens up so many more doors. For example, the Hispanic Heritage Council has provided us an opening with Don Tequila’s and a variety of other restaurants on the West Side and we’re able to analyze recipes for them for the Healthy Options program.

When you do surveys, what tends to be the most challenging?

Most challenging is waiting on line for the rides. That’s why we came up with the strolling musicians. We also have two stages on the top floor.

Can you walk us through the planning and key tasks in the weeks leading up to the event?

We’ve got it down pretty much to a science. It’s been 25 years. It does take all year. In the beginning, it’s the wrap-up and doing all the thank-yous. In the first quarter, it’s trying to secure those sponsors for the next year. The third quarter is where we try to come up with the theme or design. Leading up to the event, it’s coming up with the materials, the brochures, the collateral, and how we want to lay it all out; making sure we have the right entertainment. The month of December, it’s all about advertising and promotion. We build the website (firstnightbuffalo.org) so that people can go on and get a listing. We really want to encourage people before they get there to take a look at all the activities, because there’s so much going on you want to plan the night out so that you don’t miss anything.

Do you have a checklist of things that must be handled?

We always have a checklist and make sure we check it and check it twice – just like Santa – but something always seems to get missed and somehow we always seem to get through it, with smiles and laughs. The list is pretty long: Making sure we have all the materials that we’re going to give away, making sure we have all of our banners, that we have a banner for every sponsor. That was hard when we had 22 sites. We have site boxes. Even though we’re now only at the convention center, there’s still 13 different sites, different rooms. In each site box, we’ll have paper towels and cleaning supplies, because there’s always spills, and Band-Aids, because there’s always a kid falling and scraping their knees.

The most fun you’ve ever had at First Night?

The hypnotist. Seeing family members acting out, you realize that these people are really hypnotized because my cousin would never have acted the way he did. He had to dance like he was Britney Spears. At the time he was 12 or 13. I never laughed so hard.

If someone wants to attend or volunteer for First Night, how can they do so?

They can call 635-4959 or go online to firstnightbuffalo.org.

Do you have to buy tickets in advance?

We recommend you do, because they’re $8 in advance. They’re sold up until the day of the event at Wegmans. Or you can purchase them at the door for $10. You can’t buy them online. (It’s free for children ages 2 and under.)

We do have free parking in two of the parking ramps downtown: the Main Place Mall parking ramp, as well as the Fernbach parking ramp; that’s the one that’s right next door to the convention center.

On the Web: Read more about First Night and other foundation signature events at blogs.buffalonews.com/refresh

Scott Scanlon– Scott Scanlon, an award-winning reporter, is editor of WNY Refresh, which focuses on health, fitness, nutrition and family matters. A Western New York native, he is a graduate of the University at Buffalo and received his master's in history from Binghamton University.