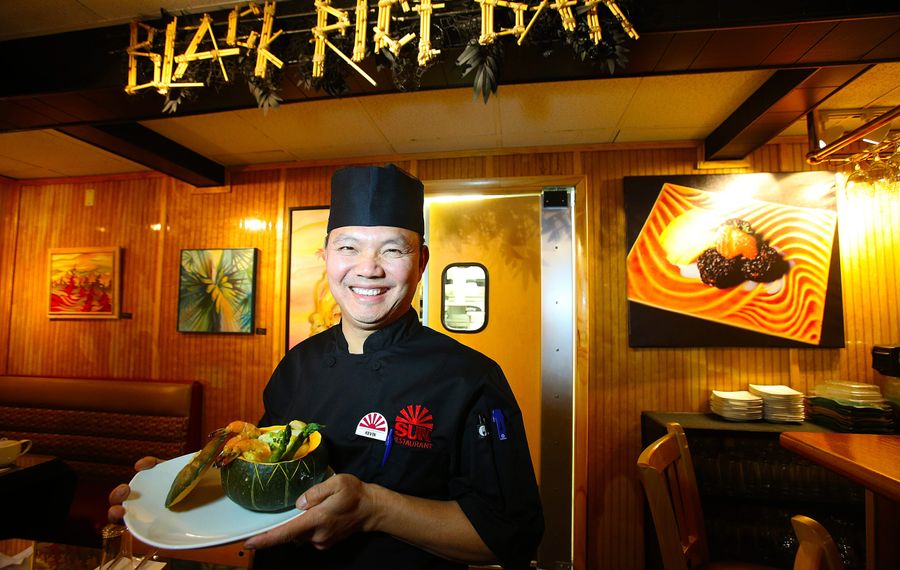 Three years ago, at a rickety table in the back of one of the Asian groceries on Niagara Street, I fell in love with a bowl of soup. ¶ Kevin Lin, the Burmese guy responsible for the sushi at the Amherst Street Wegmans, had told me his wife, Stephanie, was opening a place, at 1989 Niagara St. Their first menu was a scattershot collection of Japanese, Thai, Vietnamese and Korean dishes – and two Burmese soups. ¶ Own no koksware was soft egg noodles, tender chunks of chicken thigh, sliced hardboiled egg, all swaddled in a golden coconut milk broth husky with turmeric and ginger. It was comforting as a grandma’s hug. Topped with fresh cilantro, scallion and fried shallots, crispy flash-fried rice noodles and sliced red onion, with a lime wedge for squeezing. For $5.

I wrote about it every chance I got. Other hungry people came in and sang Sun Restaurant Buffalo’s praises on Yelp, bringing more adventurous eaters. The Lins tore out the grocery, hired a chef and went full restaurant, focusing on Burmese dishes, with Thai a strong second.

A couple of weeks ago, I came for dinner. The Lins have transformed this space, adding snazzy lighting and window treatments, comfy booths and paintings of Burmese scenery. There’s a new sushi bar where customers can watch a chef roll black rice sushi, a specialite de la maison. The mayor came for the ribbon cutting.

A few feet and three years away from my first bowl, I ordered the own no koksware.

It’s $10 for dinner, and arrived arranged in a shallow bowl, a pretty dish. Maybe too pretty. It’s the same egg and chicken, with crispy noodles on the side so you can enjoy them before they get soggy, an improvement. The broth, still delicious, was thicker and didn’t cover the noodles, which is where I stopped marveling at how the dish had been refined and gave a sigh.

I missed that old bowl of soup, the way indie fanboys lament their childhood idols not playing their first album on their current arena tour. But Sun Restaurant Buffalo has grown up and moved on, becoming one of the city’s favorites, earning Best Asian honors from Buffalo Spree and Artvoice readers.

The good news – the great news – is that there’s so much more to enjoy. By now I have tried all the Burmese dishes and most of the Thai. Not everything was awesome; I gave up trying to chew the beef curry. But here are my favorites.

Fish cake salad (nga pel thoat, $7.50) is one spicy meatball of a salad, using the Burmese deep-fried fish patties laced with scallions and red curry paste. But I prefer my fish cakes straight up (nga pel jyaw, $7), where anyone who’s eaten Thai tod mun will notice the kinship.

Another salad that Cat and I like is the Thai green basil salad ($5). It’s a simple blend of generic field mix tossed with two or three kinds of Thai basil, the licorice of the basil family. What makes it shine is the dressing of lemongrass, lime juice and palm sugar.

Coconut shrimp ($6) are a guilty pleasure, their toasty frizzled coating capable of holding way too much of the ridiculously sweet piña colada dipping sauce.

Burmese chicken curry ($11) is tender dark meat, potatoes and a thinner, more intense sauce than most Indian curries. Like most of Sun’s dishes, its spice level is adjustable.

Not spicy at all: “Sun Spicy Chicken” ($14). It’s a misleading name for a rice dish that shows the influence of Indian and Thai cuisine on Burmese food. It’s served in a clay pot so hot the rice sticks and browns, to be pried off and enjoyed. Tender chicken thighs, cashews and caramelized shallots are hidden in this fragrant biryani-like entree, which is accompanied by a Thai-like pickle of matchsticked cucumber, cilantro and red onion in sweet fish sauce.

Sun’s kitchen puts out an admirably crispy panko-coated fish fillet with a range of accompanying Thai curries and other sauces ($16). Worthy smaller-scale crispy fish action is available as an appetizer of fish sticks with pumpkin curry ($7), even if the curry is surprisingly bland.

Stir-fried mustard greens ($11-$20) is tangy pickles with your chosen protein, an intense dish to be eaten over lots of rice.

Speaking of rice, Sun is the first place I’ve had rice for appetizer, entree and dessert. The black rice salad ($8), one of Cat’s favorites, is a jumble of nutty, chewy black rice, avocado, cashews, red bell pepper, cilantro, mango and basil in lime and palm sugar dressing. That black rice also appears in lots of different sushi rolls and desserts.

But I prefer the Thai sticky rice custard ($6), a simple eggy custard steamed over a half-inch of sweet, chewy white rice, cut in squares, and served hot. Notable among the drinks are Burmese milk tea ($2), double sweet and quadruple strong. Mango danechin ($4) is a yogurt shake like a lighter mango lassi made with more ice, refreshing but not too fruity.

There’s still room for improvement. Service can be uneven.

That said, Sun Restaurant Buffalo serves distinctive, delicious dishes in comfortable surroundings. The Lins have offered Buffalo a window into the flavors of Burma, and we are the richer for it.