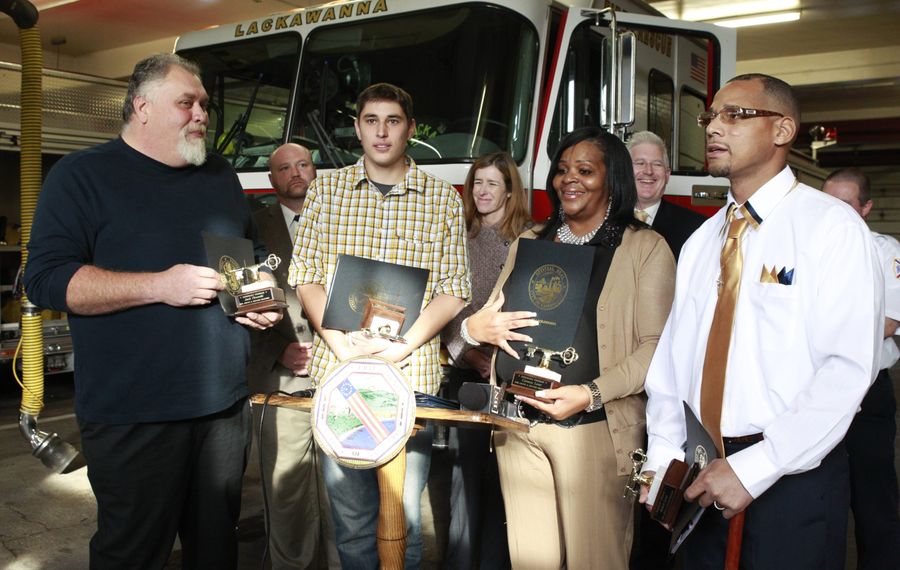 When Carmen Pierce Lowe begged a young man to toss his baby to her from a second-floor window of a burning apartment building, she wasn’t thinking about missing the catch.

Lowe gave her account of coaxing a frightened father to drop his daughters – an infant and a toddler – during a brief ceremony Tuesday at the Lackawanna Fire Department on South Park Avenue with her husband and two neighbors. The group was honored for their stunning collaboration and rescue of children and five adults, including one expectant mother, on an evening two weeks ago on Center Street in Lackawanna.

Lowe, her husband, Robert, neighbor Jack Pirowski and his 19-year-old son, Zachary, who brought a ladder for those unwilling to jump, received state and city proclamations, including being named Erie County Citizens of the Month, and small golden trophy-mounted Lackawanna city keys.

Mayor Geoffrey M. Szymanski said he still wonders how the rescuers managed to think so clearly and bring everyone to safety. “I guess when it comes to heroes,” he said, “you just act.”

Lowe said that as a mother and a grandmother, her response to screams of “Fire! Fire! Come get my kids! Help Me!” was uncomplicated and instinctive.

“You had to do what you had to do,” she said. “I don’t feel like a hero. I just feel thankful inside.”

The fire, which officials said was deliberately set in a stairwell, sent a group screaming for help from a porch rooftop Oct. 16.

Jack Pirowski noticed the flames sometime after 10:30 p.m. At first he turned down the television, thinking the screams were coming from the video game Zachary was playing in another room.

Then, from the dining room window, Pirowski saw the blaze at the two-story apartment building, kitty corner from his house.

“I went from playing video games to being in one,” Zachary told the small gathering at the fire station.

“They were screaming so bad,” Jack Pirowski said, “it was just a crazy sight.”

He and Zachary joined Robert Lowe and, standing stood together with open arms, caught two adults who jumped.

One young woman lept after Zachary climbed up toward the roof to straighten her legs so she would go feet first.

“It took a lot of nerve for her to jump and for us to be underneath her,” Jack Pirowski said. “I just prayed for strength.”

When others still on the porch roof were afraid to leap, Zachary went home to get a ladder from behind the garage.

Jack Pirowski said he didn’t realize what his son was doing. “It was fast thinking,” he said. “I’m very proud of him. … It all just worked. … We had the Lord on our side.”

At the fire station Tuesday, the Lackawanna mayor was joined by Assemblyman Michael P. Kearns, Erie County Legislator Lynne M. Dixon and Fire Chief Ralph J. Galanti, who said the arson fire was put out quickly and is still being investigated by police.

While Dixon’s staff was not able to track down the people rescued in order to invite them to the ceremony, one young woman dropped off thank-you notes a day or two after the fire.

The card says: “To my heroes. Thank you so much Mr. Jack. You saved our lives.” It is now in a place of honor on an end table with a collection of Pirowski family photos.

“When I opened it, it was just awesome actually,” Jack Pirowski said before reflecting on the neighborly qualities of people in Lackawanna, the city where he grew up.

“That’s how our city rolls,” he said. “I think anyone of us would have done the same thing that we did.”