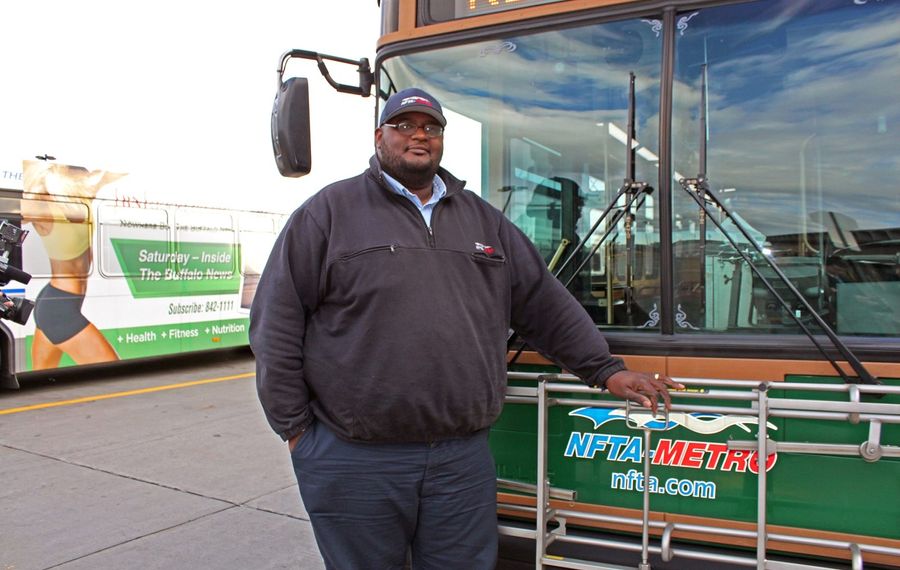 They had to wait a little longer than usual while Barton saved a woman’s life and taught them an unexpected lesson in human compassion.

As the 37-year-old driver pulled away from the school bus stop at about 3:50 p.m. on Oct. 18, heading southbound on Elmwood Avenue, he saw a disturbing sight on the Scajaquada Expressway overpass. A woman was on the opposite side of the railing leaning out over the traffic below.

“I didn’t think it was real with everything else going on around her. Traffic was proceeding as normal and a couple of pedestrians walked right by her and a bicyclist rode by. I mean, they were inches from her,” said Barton, who instinctively stopped his bus and opened the doors.

She looked at him and then back at the traffic on the expressway from her precarious perch on the west side of the overpass.

But the reality of the situation struck him when he heard one of the students weeping and saying, “I don’t want to see someone die.”

Cautiously, Barton stepped from the bus. He made his move when he was within a few steps of the woman.

“She turned back to look at me and then back at the traffic and that’s when I kind of lunged and got my left arm around her body,” Barton said. “I asked her, ‘Do you want to come on this side of the guard rail now?’ and that was the first time she spoke to me and said, ‘Yeah.’ ”

Barton said he helped her over the railing and suggested they have a seat.

“We both sat on the sidewalk right there on Elmwood Avenue and I asked, ‘Where are you from?’ I tried to get some information. She wasn’t forthcoming. She looked down and then looked up and said, ‘You smell good.’ ”

The simple remark brought a sense of relief to the bus driver, who’d splashed on some cologne that day before leaving for work.

“She wasn’t that detached,” he said.

A state prison corrections officer, who had been on the expressway and pulled his vehicle over, climbed up the embankment. A woman who identified herself as a crisis counselor talked to the unidentified woman, who was in her 20s.

“The counselor was tender and compassionate,” said Barton, who never learned why the young woman had been driven to consider taking her own life.

Buffalo police and firefighters arrived, as did police from nearby SUNY Buffalo State and the Buffalo Psychiatric Center.

Another bus was dispatched to take the young passengers on their way while Barton, a Buffalo resident, stayed at the scene to give police an account of what had happened.

“Darnell won’t tell you this, but when he went back on his bus, the McKinley students gave him a round of applause,” said C. Douglas Hartmayer, NFTA spokesman, adding that authority officials only recently learned of the driver’s heroic actions from earlier this month. “That’s because of Darnell’s modesty, which speaks to his demeanor of being very humble.”

In fact, after Barton had given a statement, he continued to work, driving the outbound Route 5 route before completing his shift.

When his adrenaline had settled down and he had time to reflect, Barton recalled thinking to himself how he had done the right thing.

But rather than allow the spotlight to shine on him Tuesday during an interview, Barton, who drove school buses for years before landing an NFTA job three years ago, said he was impressed with the way the students on his bus had behaved.

“They were great. They sat there quietly. It was an encouragement to me. Oftentimes we look at young people and we forget we were young,” he said. “As each of them got off the bus, they shook my hand.”

They are not the only ones who admire Barton.

“We are all extremely proud of Darnell’s heroic actions,” said Kimberley A. Minkel, the NFTA’s executive director. “His quick and calm response during a very stressful situation speaks volumes about his character and unwavering willingness to help someone in need.”

Barton, though low-key, says he will be pleased if what he did helps the image of his fellow bus drivers, to show them as caring and compassionate.