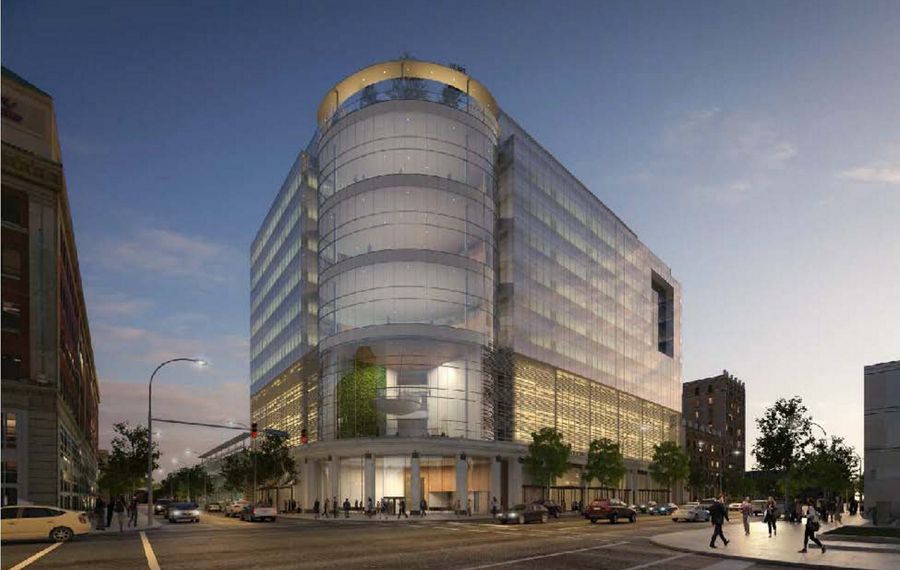 Delaware North Companies says it will negotiate a 20-year lease in a proposed new headquarters building at Delaware Avenue and Chippewa Street – but only if the project gets tax breaks, special bridge financing and possibly a grant from the county and state to help close a $10 million gap.

Delaware North and Uniland Development Co. say the incentives from the Erie County Industrial Development Agency and the state are necessary to make it financially feasible to construct a 12-story mixed-use tower and five-level parking ramp at 250 Delaware Ave.

The tower would house Delaware North’s new corporate headquarters as well as a 119-room hotel that it would operate and use as a training facility. The company anticipates keeping 350 jobs in the city and creating 65 new ones, paying an average of $97,637 for existing jobs and $70,000 for new ones.

But the privately owned companies say revenue dollars won’t justify construction of the building, and especially the parking facility, without an innovative government financing package to help with expenses. That’s because a parking ramp in Buffalo doesn’t generate as much fee revenue as a parking ramp in a much larger city, they say, but the construction costs are the same.

The special arrangement from the city, county and state – which has been used sporadically before, such as with construction of HealthNow New York’s corporate headquarters – would refund part of the tax payments to be plowed back into construction of the parking ramp.

Otherwise, both companies say, they will not proceed, and Delaware North will pull out of any lease with Uniland, which in turn would abandon the $80 million project.

“Delaware North’s proposed commitment to this project remains subject to the satisfactory outcome of these requests,” that company said in its filing. “Without a favorable outcome, Delaware North would use the remaining two years under its existing lease to weigh all options.”

The two companies made the assertions in a pair of separate but linked applications to the ECIDA. No tax breaks are being sought for the hotel or retail portions of the project, just for the office space and the garage. The project will be discussed at a public hearing at 11:30 a.m. today with the Erie County IDA at 95 Perry St. and again at the agency’s Policy Committee meeting next week.

Approval is far from guaranteed, however, as some public officials are already raising questions about why these two companies need taxpayer aid and whether the purposes are appropriate.

“Delaware North has long been a prominent and valued member of our local business community,” Erie County Executive Mark Poloncarz said by email. “It is our hope that the process will result in an outcome that is fair and equitable to all, ensures that any tax incentives provided are pursuant to current Erie County Industrial Development Agency policies, and that Delaware North stays here in Erie County.”

Delaware North currently occupies space nearby in KeyCenter at Fountain Plaza, but its lease expires in 2015. It has been working with real estate consulting firm Dudley since 2011 to research more than 100 options in the area, which it narrowed down to 27 and then to a “handful” before focusing on the current project.

“I have deep reservations about whether this is a good idea for the economy,” said Assemblyman Sean Ryan, D-Buffalo, a critic of IDAs. “I want to hear their explanation for why a company moving two blocks is such a boost to the economy that we as taxpayers should become investors in that project.”

The Buffalo-based hospitality and food service company has been headquartered in Buffalo since its founding in 1915, and the company said the Jacobs family – which owns and runs it – recognizes the company’s importance to Western New York.

But the company also says it needs a new “green” world headquarters that meets new criteria, including larger floor plans of at least 25,000 square feet each, extra space for growth, a hotel that can be a training facility, conference space and parking for its workforce.

And despite its loyalty to Buffalo, it suggests – or in one place, outright states – that it could look instead to other “strategically important areas” such as Boston, Florida or California, where it already has “significant business operations.”

The company noted that it could benefit from “being based in a hub city” for easier travel by employees or in a city with a younger demographic pool to recruit from. In particular, it cited Boston, where the population of young adults ages 20 to 34 represents one-third of the people – compared with one-fifth in Buffalo – and where the overall population is much larger.

Delaware North owns and operates the 19,600-seat TD Garden, home to the Boston Celtics and Boston Bruins, and the Jacobs family also owns the Bruins. It’s also planning to develop a large multi-purpose office tower in Boston on land it already owns.

However, executives denied Monday that these statements are a threat that it could move.

“Our desire is to keep our operations in Buffalo and then position ourselves for our growth to occur in Buffalo,” said Daniel J. Zimmer, vice president of corporate finance and development. “We certainly didn’t want to take the case that we’re threatening to move, and we would just hope that we wouldn’t be disadvantaged through our commitment to downtown Buffalo.”

In their dual applications, Delaware North and Uniland are seeking sales and mortgage recording tax abatements, as well as grants to fund workforce training and technology.

Because the property is a brownfield that was already accepted into the state’s Brownfield Cleanup Program and is also located in a special state-designated Environmental Zone, the Department of Environmental Conservation would refund that full tax difference back to Uniland.

A government source said Uniland is also seeking a grant of up to $5 million from Empire State Development Corp. but has been rebuffed so far.