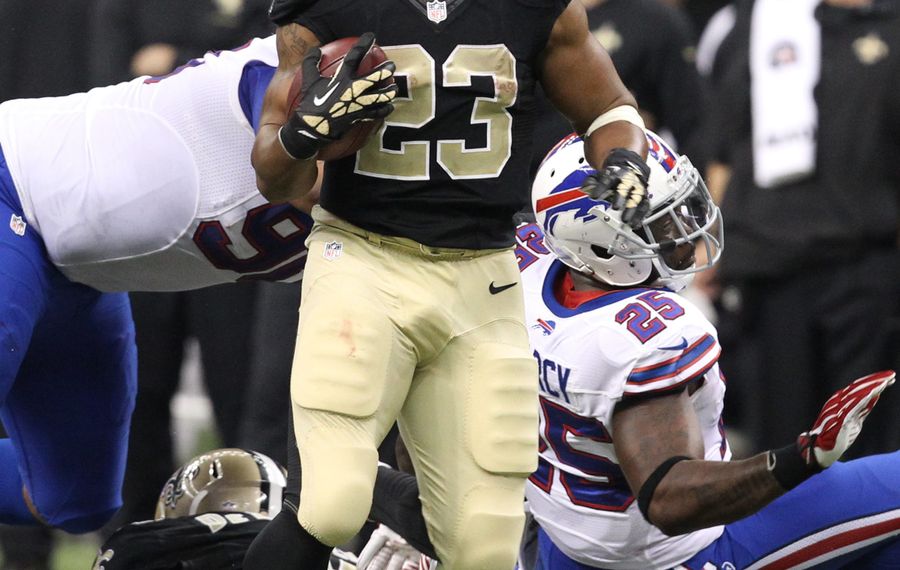 Fred Jackson ran for 42 yards in the first quarter and looked like he could pull the yoke. But the Saints heated up and forced the Bills to throw. Jackson added only 3 yards to his total for the rest of the game. C.J. Spiller was deactivated because of his sprained left ankle. Tashard Choice had a 20-yard run in the second quarter. On the first play, Thad Lewis fumbled a quarterback keeper.

Lewis and Stevie Johnson get some points for grittiness, but the Bills didn’t make enough plays here. Lewis absorbed four sacks and nine quarterback hits yet still posted a decent stat line: 22 of 39 for 234 yards and a TD with an interception. He fumbled once while trying to pass. The Bills netted zero passing yards in the first quarter.

Pierre Thomas rushed for only 65 yards and didn’t break loose. That’s because the Saints were having so much success through the air. Thomas averaged 4.6 yards a carry, but Khiry Robinson averaged a measly 1.3 yards. The Bills recorded four tackles for losses on Saints run plays.

The Bills generated some pressure on Drew Brees, which isn’t easy. But coverage was insufficient too often. Brees’ 146.1 passer rating is the eighth-highest by an opponent in Bills history. On the longest of his five TDs, he underthrew Kenny Stills, but Stills was so wide open he still caught the ball and needed to outrun only outside linebacker Jerry Hughes for a 69-yard touchdown.

Dan Carpenter missed a 50-yard field goal that ended his streak of consecutive field goals at 15, but he made a 37-yarder. Brian Moorman reinforced the team’s decision to cut Shawn Powell. Moorman netted 45.7 yards on three punts with no return yardage. Buffalo’s kickoff coverage led the league in number of drive starts inside the 20-yard line and notched another, tackling Darren Sproles at the 14.

Doug Marrone took the blame for losing two challenges at the start of the fourth quarter. The decisions cost the Bills two timeouts and the opportunity to challenge for the rest of the game. In both instances, he challenged spots on inside runs, where video evidence rarely is conclusive. The Bills were penalized for 12 men for the third time this year.

Thomas had a modest output, but his 65 yards were a Saints season-high. The Saints didn’t have 2011 first-round pick Mark Ingram, who has been struggling with turf toe. Imagine how great the Saints offense would be if the Heisman Trophy winner was meeting coach Sean Payton’s expectations.

Brees will be a Hall of Famer someday, and Sunday was one of the best games of his career. He threw for five touchdowns. He sprayed the ball over the field. He completed passes to 10 targets – eight of them by halftime – for the first time in two years. Tight end Jimmy Graham scored two touchdowns on three catches. Stills caught three passes for 129 yards.

As mentioned, the Saints looked like they could have problems stopping the run early. They entered the game ranked 22nd in rush yards and 31st in average per carry. But they limited the Bills to just 46 rushing yards from the second quarter on. All told, the Saints allowed a respectable 88 yards and 3.5 yards a try. They recorded four tackles behind the line on run plays.

New Orleans swarmed Lewis. Maybe too much. Two roughing calls on cornerback Corey White gave Buffalo more yards than T.J. Graham, Robert Woods and the running backs combined through the air. In addition to all those hits delivered on Lewis, New Orleans had seven pass breakups. Two of Buffalo’s three giveaways were with Lewis trying to throw.

Garrett Hartley has had a fine season, but he missed his only two field-goal attempts. His 47-yard and 38-yard attempts went wide left in the first half. Sproles was a non-factor in the return game. Punter Thomas Morstead was OK.

The Saints, coming off their bye week, began sloppily. They averaged 5.6 penalties per game but committed five of them in the first half Sunday. The Saints also had three three-and-out possessions by the middle of the second quarter. But Payton’s team found its rhythm and dissected an inferior opponent.