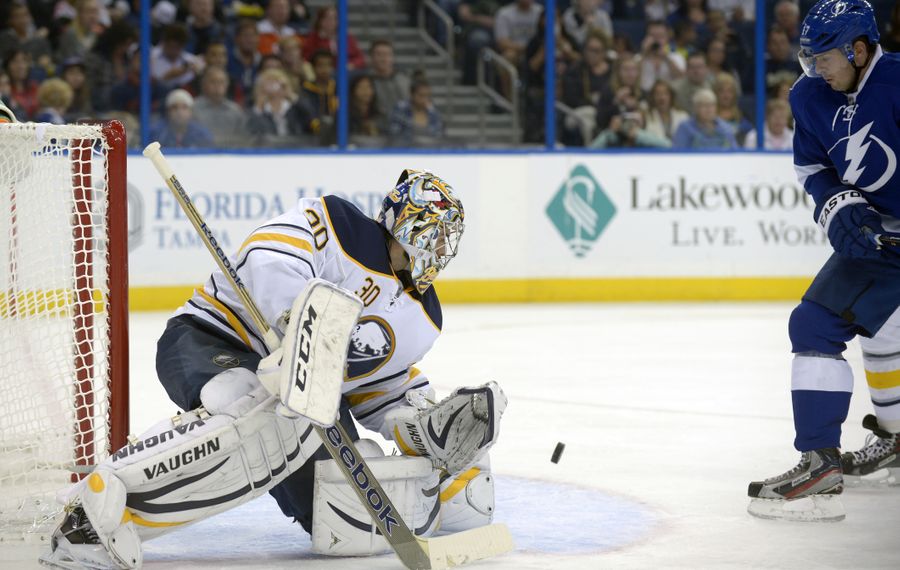 TAMPA, Fla. — During a frantic three-minute span Saturday night, the Sabres went from one goal up to their 10th regulation loss. Cody Hodgson and Drew Stafford watched it all from the bench.

Tampa Bay ended Buffalo’s winning feeling at one game, scoring twice in the final 5:51 to earn a 3-2 victory. The Sabres’ busy and effective penalty killers helped put the team on the verge of a second straight win, but things fell apart at the end with missed assignments and net-front scrambles.

“We’ve got to close those out,” Sabres right wing Brian Flynn said in Tampa Bay Times Forum. “We were fortunate to be up, 2-1, with seven minutes left, and those are the ones you’ve got to come out on top on the road and steal two points.”

Coach Ron Rolston was furious at Hodgson and Stafford following the game. Hodgson took only two shifts during the third period while Stafford had three.

The action was steady all game, but it picked up during the final eight minutes. Thomas Vanek was having a quiet night despite playing against the team he loves to torment. A reckless run of penalties by the Sabres (six in all) kept their best scorer glued to the bench for long stretches.

“You try to stay sharp and get into it,” Vanek said, “but it tires out the guys that kill, and the guys sit on the bench, it’s hard on them, too.”

When Vanek finally got a chance, he put Buffalo in front. Great passes by Zemgus Girgensons and Marcus Foligno resulted in Vanek getting the puck in point-blank range, and he beat Ben Bishop with 7:14 left to give the Sabres a 2-1 lead.

The goal brought Vanek’s totals to 24 goals and 39 points in 33 games versus Tampa.

It wasn’t enough to make the Sabres a winner as they fell to 2-10-1. Martin St. Louis beat Ryan Miller on a one-timer just 83 seconds after Vanek scored. Onrej Palat recovered a rebound during a net-front scramble and flipped the puck home with 4:05 to play, giving the Lightning two goals in less than two minutes.

The Sabres flew home after the game and will be off today. They’ll need the rest heading into Monday’s highly anticipated meeting with Dallas. Stars coach Lindy Ruff will make his first appearance on the visiting bench in First Niagara Center.

Tampa’s power play took advantage of the Sabres’ first penalty, with Tyler Johnson putting Buffalo in its customary 1-0 hole in the first period. Opponents have a 16-1 scoring advantage in first periods this season.

The Sabres’ penalty killers then kept the team in the game. Once the Sabres got back to full strength, they got on the scoreboard as Flynn scored with 7:02 to go in the second period.

“You’re not going to create any offense when you’re in the box,” Flynn said.

Ville Leino returned to the Sabres’ lineup for the first time since breaking a rib in the season opener, and he assisted on Buffalo’s opening goal. He was originally scheduled to return later this week, but he convinced the coaching staff he was ready.

Like other observers, Leino noticed during his time on the sidelines that the Sabres rarely have the puck. Once that changes, the results will change.

The Sabres placed Mike Weber on injured reserve to open a roster spot for Leino. The defenseman suffered a broken thumb Friday night blocking a slap shot taken by Florida’s Mike Weaver. Rolston said Weber will be out “long term.”