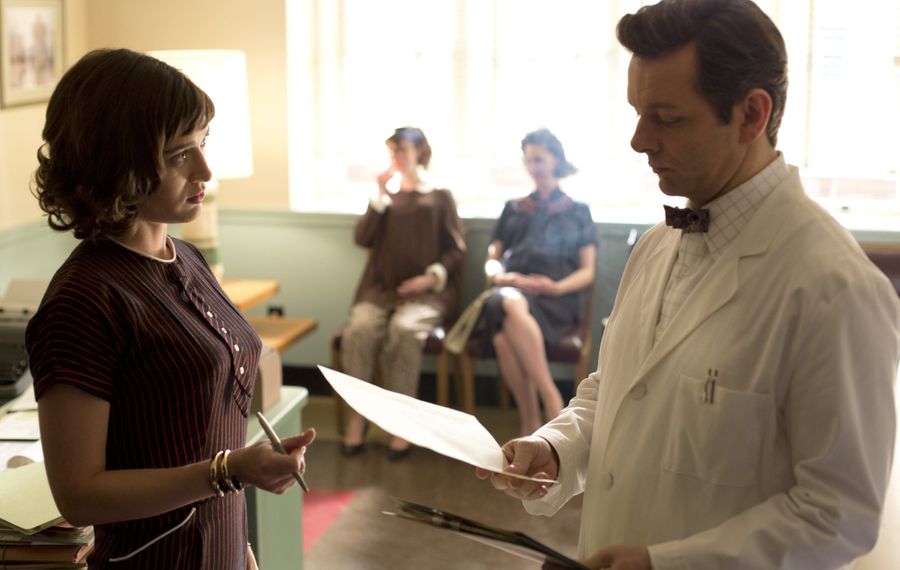 I saw Dr. William H. Masters in 1979 at the Chautauqua Institution Amphitheater. His accustomed bow tie was severe. His eyes, even when relaxed, had the intensity of a Puritan preacher – Jonathan Edwards, say, telling us of “sinners in the hands of an angry God.”

The Chautauqua Institution is, of course, no one’s idea of a den of iniquity. It’s an Elysium of learning, art and community – a 19th century American dream begun in religious fervor and surviving in the Twitter Age.

It wasn’t a den of iniquity in 1979 either. None of us packed into the amphitheater for a morning lecture by Masters and his partner Virginia Johnson would fill anyone’s idea of an underworld. The criminal class, we’re not. We’re the soul of American propriety – well-scrubbed learners assembled to hear an authentic modern oracle.

Whose subject was sex.

I had tried and failed, by then, to get a one-on-one interview with Masters. Years after he and Johnson turned the Western World upside down in 1966 with the publication of “Human Sexual Response,” he is nothing if not savvy about journalists and finds it smarter to avoid them whenever possible.

So I’m in the amphitheater taking notes on Masters’ lecture. The woman next to me is elderly and expensively, if casually, dressed, as befits a summer morning in Chautauqua. She knits throughout Masters’ entire lecture.

At one point, though, as Masters offhandedly mentions the number of times the average male is unknowingly aroused during sleep on an average night, I can hear her breathing quicken and the click of her needles accelerate. Her eyes never move but this tidbit of news from the good doctor can’t help but get her attention.

I thought about that dignified and grandmotherly woman as I watched Showtime’s “Masters of Sex,” which is, by conservative estimate, quite the damndest television show any of us is likely to see all year – the lives of Masters and Johnson told in hour-long weekly installments of fascinating television.

It’s terrific and unlike anything you’ve probably seen: funny (how could it not be?), serious, extraordinary, as historically punctilious as it dares to be and full of information about a subject which, for millennia, has inspired more ignorance than anything else and an equal amount of terror along with it.

Which, of course, is the reason Masters and Johnson were American heroes of a gloriously eccentric sort. They were hunters on Safari into the previously dark heart of the human orgasm and they came back with news few people expected and many didn’t want. That, for instance, being 80 or older didn’t necessarily preclude sex. That the multi-orgasmic capacity of women could well render the human male a second-class citizenship in territory he thought had been conquered millennia ago.

In “Human Sexual Response,” Masters and Johnson came back from their explorations with the news. And it fulfilled Ezra Pound’s inspired definition of literature in another context – news that stays news.

So, I suspect, will Showtime’s “Masters of Sex” in a different way.

What Masters and Johnson did in their scientific research became the fount of what everyone now knows for sure about a subject the human race has, for thousands of years, preferred to leave to anecdote – human sexuality.

Anecdote, after all, is all Alfred Kinsey and his not-so-merry band studied back in Indiana when he started. They asked questions, listened to the answers and tabulated them into statistics and sociology.

Not Masters and Johnson. They risked accusations of prurience, perversion and worse by carefully watching and monitoring people having every kind of sex.

Showtime’s series is based on Thomas Maier’s terrific book of the same name and is the unlikeliest material ever for a TV series (or close to it). Maier is involved in the series, too.

The degree to which Masters pursued genuine, thoroughly observed scientific information about the basic subject so many prefer shrouded in ignorance was funny, heroic and maybe a little mad, too. It’s Puritan single-mindedness going in an altogether different direction.

“Masters of Sex” spends a good deal of time, too, making sure we know how utterly impossible the endeavor would have been without a female partner for Masters.

Unlike Masters, who was, at St. Louis’ Washington University Hospital, a renowned doctor and fertility specialist, Johnson was a former nightclub singer who became a departmental secretary, married Masters and was the crucial collaborator in a major transformation of human knowledge.

Lest anyone suspect that “Masters of Sex” is an exploitative bit of TV trash, it comes with a very high pedigree. The director of this evening’s pilot was John Madden, who previously gave us “Shakespeare in Love” and “The Best Exotic Marigold Hotel.” The executive producer and showrunner is Michelle Ashford who worked on HBO’s “John Adams” and “The Pacific” and the TV adaptation of Stephen Ambrose’s book about Lewis and Clark.

Madden’s pilot episode is among the best I’ve seen in a long while. Michael Sheen – who played Tony Blair in “The Queen” and David Frost in “Nixon/Frost” – is the impassioned, oft-forbidding Masters, a man who started out in the 1950s wondering aloud why a woman would fake an orgasm. (Ashford’s answer in the movie, put into the mouth of Virginia Johnson: “To get a man to climax quickly. Usually so that the woman could get back to what she’d rather be doing.”)

Virginia is played by Lizzy Caplan, who hereby arrives at something like the Big Time in grand style as well as occasional dishabille. Johnson was selected to be Masters’ assistant because her significant practicality, unflappability and sexual experience (twice divorced; her second husband was a jazz pianist) dovetailed perfectly with Masters’ near-fantastic dedication.

Beau Bridges plays Masters’ academic benefactor, a skeptic and pawky convert to the cause.

“Masters of Sex” can’t help but go all over the dramatic map with its story – from drollery to nudity to soap opera to graphic frankness to comedy to heroic drama about people trying to do what no one had done before.

The soap opera, for instance, in next Sunday’s episode is counter-balanced the week after as the show turns smart and even wise. (His protector and superior, superbly played by Bridges, advised Masters, “You want to lead an unconventional life, you’ve got to hide in plain sight.”)

A great deal of effort was expended hewing as close to the ’50s and ’60s of Masters and Johnson’s research as they could for accuracy’s sake. The results, as you might guess, can’t help but seem anachronistic at times.

But here is a TV show that does the kind of things cable TV does best which is take an audience to a place it never dreamed it would go – like, say, a psychiatrist’s office where a Mafia Don named Soprano is explaining to a shrink why he cries at the baby ducks in his pool. Or what happens in the suburban home of a returning heroic POW who is secretly a Jihadist terrorist. Or the doings in the Albuquerque residence of a chemistry teacher who has become the most ruthless blue meth tycoon in the Southwest. (“Breaking Bad” as its fans all know, signs off forever tonight on AMC. A DVR night, to be sure.)

Or, beginning this evening, a driven and obsessed scientist with an assistant he needs more than he knows and turns a Missouri brothel into a laboratory for sexual investigation so that he can plot in micro-detail what he’s identified as the four stages of sexual encounter.

Jeff Simon– A semi-retired critic and columnist for The Buffalo News. Before that, he spent a couple decades as The News' arts and books editor.