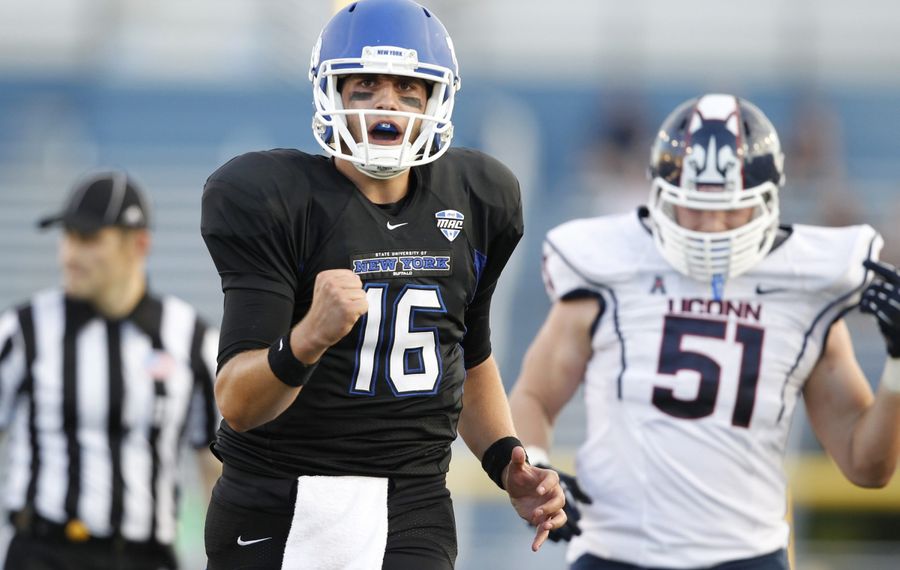 How they arrived at their 2-2 record really doesn’t matter at this point for the University at Buffalo. The embarrassing 56-point loss at the hands of powerhouse Baylor is a distant memory. The fact they needed five overtimes to beat a Division I-AA opponent in Stony Brook was a lesson learned.

The Bulls experienced enough trauma in the first three weeks to understand the value that comes with filing away a single game, so they would be wise to take a similar approach to their 41-12 rout Saturday over winless University of Connecticut. Kick back and enjoy the win this afternoon, fellas, and discard it like junk mail.

Next week, the season really begins.

UB opens its Mid-American Conference schedule at home next Saturday against Eastern Michigan, which shouldn’t be much trouble even for an inconsistent team. It’s conceivable that UB could win its next three games. Western Michigan on the road will be a tough game, but Massachusetts at home shouldn’t be a tall order.

These are the games that matter. For all the questions surrounding the program, they were never in any real danger while playing non-conference games. Forget the likes of Ohio State. Jeff Quinn, who signed a contract extension through the 2017 season, appears secure so long as he wins his share of games in the conference.

Throw away the scores in the first four games. Baylor scored 70 points, but it really didn’t matter if it was seven or 700. It was a loss, one that was expected. The win over Stony Brook looked hideous, but it was a win. The win over UConn is certain to instill confidence in a 2-2 team when it’s needed most.

Finally, the Bulls put together a game Saturday that offers hope going into a string of eight straight conference games to finish the regular season.

The same defensive unit that Baylor abused like a Pop Warner team forced a fumble, returned one of its three interceptions for a touchdown, blocked a field goal and had five sacks against UConn. UB allowed only 27 total yards in the second half Saturday, when it had the game under control and was allowed to unleash its defense.

The same offense that struggled mightily against Stony Brook and had 1 yard in the first quarter against UConn woke up over the final three quarters Saturday and established what was expected going into the season. The Bulls scored more points in the first half, 28, against UConn than they did in any of their first three games this season.

Joe Licata threw a career-high three touchdown passes, lofting a pair of throws that Alex Neutz and Fred Lee turned into pretty touchdown catches. Branden Oliver ran for 90 yards on 23 carries and another score, giving UB the backbone in the ground game that they expected before the season began.

Overall, it was impressive and maddening just the same.

Why it was absent against Stony Brook and why it returned Saturday against UConn remains a mystery. Perhaps Stony Brook was better than many expected and UConn, which posted consecutive 5-7 seasons, was worse. Perhaps the week off allowed UB to regroup and establish an identity, whatever it may be.

“It’s a program-builder,” Quinn said. “It was a complete performance by every single player on that field. … Now what we have to do is learn from it, built on it and continue to grow and get better. I know we’re in a great place right now, and I know our players are really excited about where we’re at.”

Where is it all going?

The same question has been hanging over UB for years. It was expected to compete for a conference title, but that seemed comical after three non-league games. There was no crime in losing to Ohio State, but the lopsided loss to Baylor and the sloppiness against a supposed weakling in Stony Brook created cause for concern.

At least that was the perception in the community, much of which sees Buffalo football from afar. In fact, many have wondered whether Quinn warranted a contract extension through the 2017 season, especially after basketball coach Reggie Witherspoon was fired for considerably less.

The win Saturday over a winless team doesn’t eliminate questions, but it should temporarily quiet the masses. UConn stayed within 10 points of Maryland and lost to Michigan by a field goal. However, if the Huskies continue playing the way they did Saturday, they’re headed for a dreadful season.

UB is looking to build on two straight wins this year and four straight home victories going back to last season. The best way for teams in the MAC to start stringing wins together is by playing sound defense. The Bulls proved Saturday that they can be very good on any given day, just like everybody else.

“We’ll carry the momentum from the last two games, especially with a win like this when we dominated our opponent,” defensive back Najja Johnson said. “It feels good. It’s definitely going to carry our momentum into next week in MAC play.”

In 2008, they won the conference title under Turner Gill with an underrated defense that led the nation in forced turnovers. Casual fans remember Drew Willy, Naaman Roosevelt and James Starks from that team but have long forgotten the likes of Josh Thomas, Mike Newton and Justin Winters.

These Bulls aren’t in the same class quite yet, but they should build confidence after playing so well Saturday. They got big plays from people other than Khalil Mack.

Adam Redden had a sack, forced fumble and recovery on the opening series to set up the first UB touchdown. Redden had two sacks along with Beau Bachtelle. Johnson returned an interception for a touchdown. Lee Skinner led the Bulls with 10 tackles. Courtney Lester and Nick Gilbo picked off passes.

The defense they played Saturday will need to continue if they’re going to be taken seriously in the conference. They shut down UConn. Now, they need more.

Without getting too far ahead, UB could be in good shape in another month. If it wins its next three games, hardly a tall order, it’ll be riding a five-game winning streak into Kent State on Oct. 26. That’s when all the blather about the Bulls being bowl eligible becomes worthy of real conversation.

This win was a start, but bigger tests await them. If they continue winning, they may look back on the victory over UConn and argue it was the start of something good.

Bucky Gleason– Bucky Gleason is senior sports columnist for The Buffalo News. He has covered sports on all levels since 1992. He is a terrible golfer who remains undefeated in match play on the 19th hole. He lives in Hamburg with his wife and four children.