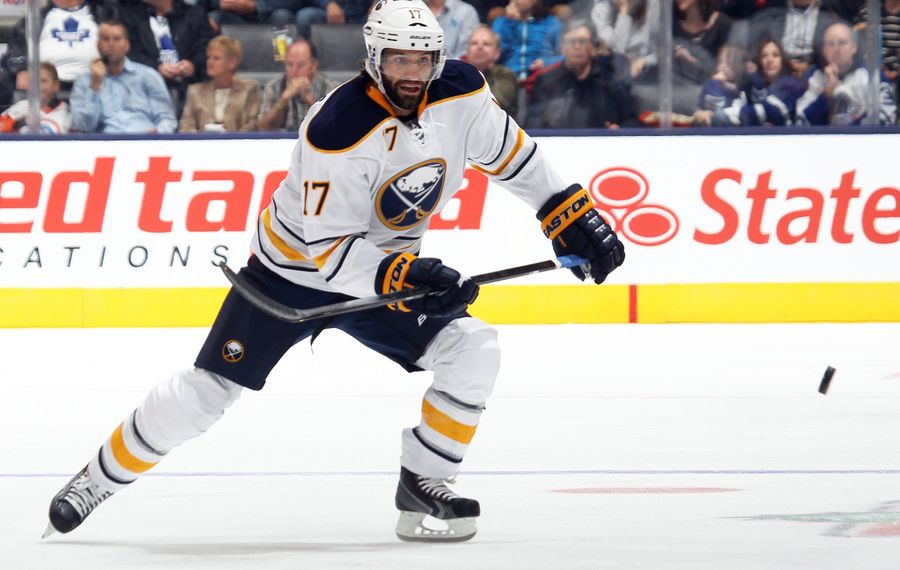 Did you hear the one about a Sabres prospect who had to re-enter the draft because his rights were lost in a fax machine miscue?

Mike Zigomanis, the victim of circumstances out of his control in that case, has heard about it the past 12 years from customs agents every time he crosses the border to enter Western New York.

“Nobody’s letting that go,” said Zigomanis, the 1999 second-round pick of the Sabres who at the time of the snafu in 2001 wasn’t amused that his first NHL contract was voided. That happened because there was a salary error on the first version and the corrected version arrived after the deadline because the league’s fax machines were overworked.

“They always get a chuckle out of it,” the North York, Ont., native continued. “I can’t say anything. It gets me over the border a little quicker. Talk about a fax machine and they let me go.”

Zigomanis can get a chuckle out of that gaffe now that he’s finally part of the Sabres’ organization.

The 32-year-old center signed a one-year American Hockey League deal over the summer to play for the Rochester Americans – a team he tormented the past two seasons as a member of the Toronto Marlies – and will make his red, white and blue debut Friday night at Blue Cross Arena in Rochester when the Amerks open against defending Calder Cup champion Grand Rapids.

Zigomanis has played in all situations during his 12 seasons, although he’s at his best in the face-off circle (he has won 59.5 percent of his 1,360 draws in the NHL) and on the penalty-killing unit. He has put up 413 points in 524 games in the AHL, including a career-high 61 during the 2011-12 campaign in which he helped the Marlies reach the Calder Cup final.

He’s appeared in 197 NHL games (21 goals, 40 points), scoring 14 goals in 75 games during the 2006-07 season with Phoenix. He also has his name engraved on the Stanley Cup for his one season with the Pittsburgh Penguins. He was a valuable asset in the faceoff circle until a shoulder injury turned him into a spectator during the playoff run.

“He won about 90 percent of faceoffs against us last year,” Amerks coach Chadd Cassidy said. “He was a huge part of Toronto’s success. For him to be able to come to us now – he’s an elite penalty killer … he’s very good on the power play, he’s a great center-ice man and wins a ton of faceoffs – those three things right there are going to automatically make your team better, and then you throw in his experience and his leadership factor, those are things we’re going to rely heavily on for him. Those were parts of the big reason why we wanted to sign Mike in the offseason.”

While Buffalo Sabres fans have been warned by management they will likely endure some suffering this season, the Amerks may have the right balance of prospects and veteran depth to win a playoff series for the first time since 2005.

Zigomanis was one of the four veterans signed to bolster the Americans. Jamie Tardif, a 30-goal scorer in Providence last year, and defenseman Drew Bagnall, a six-year AHL veteran who’ll turn 30 next month, also joined the organization during the summer. Eleventh-year center Matt Ellis opted to re-sign with the organization instead of leaving via free agency.

In exchange, the Sabres hope their knowledge of the game (a combined 36 years of experience) can aid the development of prospects like Dan Catenacci, Kevin Sundher and Jerome Gauthier-Leduc.

“It’s going to be a situation where our veterans are going to be leadership guys in our room,” Cassidy said. “They’re going to be the guys who are going to take the coaches’ message to the players and make sure they’re holding guys accountable and showing them the right way to do things.

“I think that the best teams, the case is always the team leads the team. It’s got to come from inside the room. Matt Ellis did a great job when he got sent down last year of kind of taking over our locker room, leading us on our playoff run. Obviously with the reinforcement of those other three guys, he’s going to have a lot more help in the locker room.”

Veteran experience is nice, but Zigomanis said prospects are ultimately the key toward achieving success in the minors.

“Every situation is different. Every organization from year to year changes,” Zigomanis said. “It’s still going to be a fairly younger team in Rochester. We’ll have a couple of older guys, but we’re going to rely on that young talent, and that young talent kind of propels a team in the minors, I think. They push the direction the team is going to go in, so we’re going to rely on those high draft picks and young prospects.”

Matt Hackett takes over the starting netminder duties now that David Leggio, the Williamsville native who was named Amerks’ MVP the past two seasons, signed with the Washington Capitals.

The Amerks will earn more attention than usual in hockey circles in December. They will play an outdoor game at Rochester’s Frontier Field on Dec. 13 against Lake Erie. Then, they will participate in the Spengler Cup, the oldest ice hockey tournament in the world, in Davos, Switzerland from Dec. 26 to 31. The event was founded by Dr. Carl Spengler in 1923 as a means of promoting teams from German-speaking European countries that might have been ostracized following World War I. The Amerks are making their second tourney appearance and are the only professional club from North America to earn an invitation.

A lot can happen during a season, but Cassidy admits it would be nice if Rochester could make a serious run at winning the organization’s first Calder Cup since 1996.

“Our focus is just on making sure we’re doing things the right way, we’re setting the right culture,” he said. “Our expectations are to win hockey games, and the way that you win hockey games is by doing the right things consistently. If we can do that, we’re going to put ourselves in a great position to make a deep run.

“We have put some resources into bringing in some older guys that can hopefully put us in a better position of getting into the playoffs and making a run going forward, so yeah, it absolutely puts a little bit more emphasis on” winning.