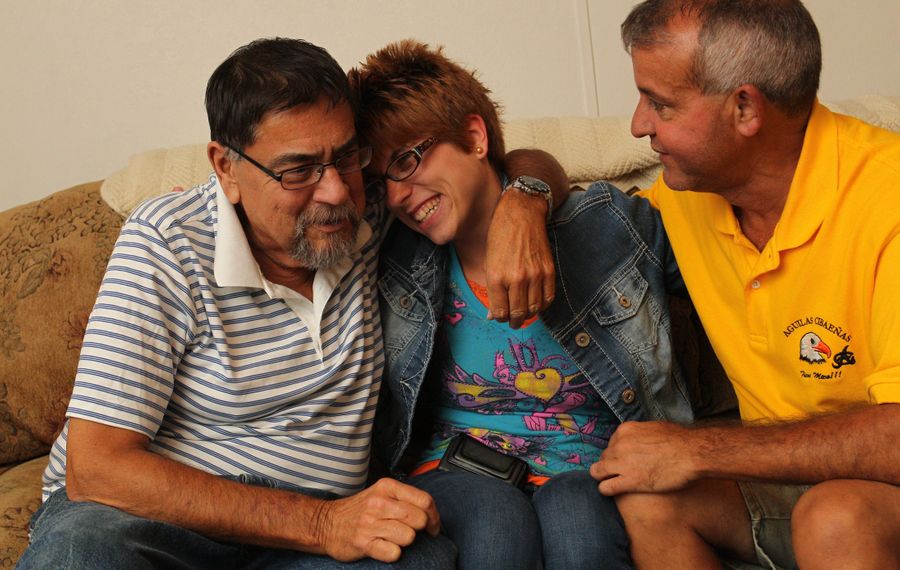 WILSON – It could be said that Tanya Sieck saved two lives with one generous act. The Wilson waitress donated a kidney to a stranger, in the hope that it would help her ailing uncle move up on the list of those waiting for a kidney transplant.

Today the man she didn’t know, Juan Aybar of Lockport, and her uncle, Daniel Roberts of Wilson, are both doing well.

And some people are calling the 27-year-old waitress a heroine.

“I would definitely do it all again,” Sieck said, looking back on her decision as she sat in her home with her arm protectively around her uncle. She was wearing a T-shirt with the inscription: “God gave me two kidneys so I could share.”

As Roberts’ condition had worsened and it became obvious that he needed a transplant, family members were tested for possible donors, but there was no suitable match. Then they looked into a “swap” where two families who match donate directly, but that didn’t work out, either.

That is when Sieck learned of a third option: giving her kidney to a stranger.

His niece’s donation didn’t guarantee Roberts would get a new kidney, but he was given “extra points” to move up on the waiting list, which also takes into account how long someone has been waiting and how ill the individual is.

Sieck donated her kidney to Aybar in June.

Then on Sept. 18, Roberts got his kidney from a deceased donor in an operation at the Erie County Medical Center Transplant Center, ending a 5½-year wait. He was home from the hospital five days after receiving his new kidney.

“I feel like I’ve been reborn,” Roberts said. “Two days after the surgery, I woke up and said, ‘I feel like a million dollars.’ ”

An unexpected benefit of the two operations is the close relationship that has developed between the two families.

Sieck’s first question after surgery was not about herself or her uncle’s status, but rather, “How’s Juan?”

The Sieck family had been given the opportunity to meet with Aybar at ECMC one week before the surgery.

“It was the most incredible and emotional experience to think that [Tanya] was going to make the difference in someone’s life. She was going to give him life again,” Tammy Sieck said of her daughter. “We cried for about an hour.”

“I had never met Juan before, but we found out we are both retired from Delphi. They’re wonderful people and have become our extended family,” said Tanya’s adoptive father, Ricky Sieck, who adopted Tanya at age 18.

Aybar, 58, who had been waiting eight years for a kidney, including more than three years on dialysis, said Tanya and her family are great people.

The feeling is mutual. Tanya said: “He was a stranger but he’s not a stranger anymore.”

Aybar said after waiting so many years he felt great, right after he woke up from surgery. For the first time in many years he was able to travel and recently went to visit family in the Dominican Republic.

Being a donor was not easy for Sieck. It was painful and she was out of work from her job as a waitress at the Down on Main Street Diner for six weeks but received tremendous support from her employer and the hospital.

The gift of life was overwhelming for Roberts.

“At first, when I found out she wanted to give her organ for me, I refused to take it. I said no,” he said, tearing up and unable to continue. “She’s always taken care of me. Saying thank you doesn’t seem like enough.”

Sieck was carefully screened to make sure she was prepared and able to make the decision on donating an organ, her mother said.

Tammy Sieck said her brother, who had no other immediate family, was like a father to Tanya as she raised her alone. Both lived with Roberts.

Tanya recently moved back in with him, and Tammy and Ricky Sieck also chose to move nearby in order to give Roberts, who is also legally blind, the daily medical care he needed.

Tammy Sieck said that when Roberts became ill the family first took him to hemodialysis at Niagara Falls Memorial Medical Center to remove the blood from his body and purify it, a process that took four hours a day, three days a week, but it was time-consuming and hard on his body.

“It was terrible – like you were run over by a truck,” said Roberts.

Two years ago he was introduced to peritoneal dialysis, which can be done at home, but required daily injections of insulin into a bag, connecting a catheter, and a highly sterile environment.

“I got trained to do it, and my husband and I took turns hooking him up,” Tammy Sieck said.

Roberts said he lost his kidneys from complications involving his diabetes, which caused him to contract MRSA, a difficult-to-treat bacterial infection, caused by an untreated foot wound.

“It was so lethal,” he said of the treatment for MRSA. “It killed my kidneys.”

He said he was always sluggish and weak.

“You get to the point that you get used to it,” Roberts said of his deteriorating condition.

But the family was all smiles as they started to see hints of what a healthy future might look like.

Roberts said he is on anti-rejection drugs and is watching his salt intake to preserve his new kidney for as long as possible, but said after years of monitoring his liquid intake, he is looking forward to some of the simple things most people take for granted – to eat soup and drink unlimited amounts of water again and to be strong enough to start taking walks again.

“You just don’t comprehend what she has done,” Ricky Sieck said of Tanya. “In my eyes she has done more ... ” his words trailing off in emotion. “It’s just so unselfish. She just knew her uncle needed this to go on.”