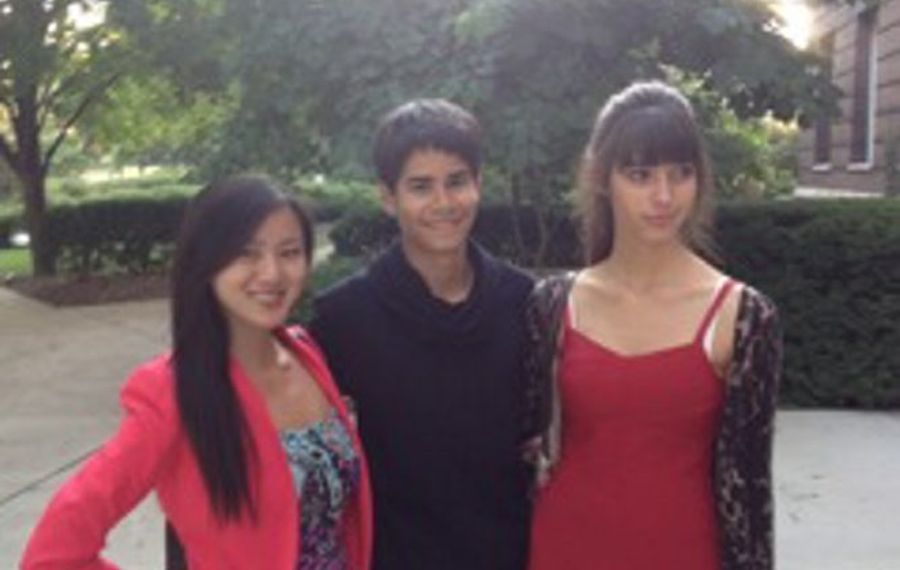 For most teens, summer means sleeping in, procrastinating on doing their summer reading and spending time with friends. But I, along with 83 others from around the world, traded all this in for waking up at 8 a.m., attending lectures and surviving off of Easy Mac and caffeine.

I attended the 2013 Medill-Northwestern Journalism Institute.

The Medill-Northwestern Journalism Institute is a five-week residency at Northwestern University in Evanston, Ill. This past summer, 84 rising seniors from 22 states and El Salvador, France, Canada, China, Guam, Indonesia and Taiwan were selected to attend.

“It was the most intensive thing I’ve ever gone through academically,” said Anne-Sophie Bine, 16, of Paris. “I wrote more in a smaller period of time than I have in my entire life. I constantly felt like there was something that I could and had to aspire to, that there was so much room for improvement. It’s a little overwhelming, but it’s stimulating intellectually.”

“Before the program, I had no idea how to write an article since I was all broadcast,” said Ana Cordera, 17, from Lake Orion, Mich. “Cherubs first taught me how to write and then challenged me to become a better writer. I learned the importance of deadlines, small details and accuracy.”

The instructors gave more than just lectures and assignments. They were helpful inside and outside the classroom. During lectures, the instructors implemented humor, which made the lessons more interesting.

“The professors were always on your side,” said Helen Lee, 17, of Lexington, Ky. “They cared so much about you. I remember a few friends and I called our instructor at 11 p.m. one day freaking out about an assignment, but she calmed us down and came to talk it through with us. These instructors were phenomenal. Not only did they have so much to teach us, but they were patient, kind, and most importantly, our friends.”

But cherubs learned much more than just journalism.

“Welcome to the best summer of your life” was written on the sidewalk on June 30 when students arrived on campus. Anxious parents filled the lobby as cherubs checked in and unpacked in their dorms.

This was the first time most lived in a dorm with a roommate. Most cherubs had a roommate but some were assigned singles.

“Living with a roommate was a great experience because I was able to form a bond with one person in particular in a way that I couldn’t with others,” said Ryan Herrera, 17, from Charlotte, N.C. “My roommate Tristan and I would bond over TV shows, help each other with assignments, and just have interesting conversations about practically anything in the middle of the night.”

My roommate was Anne-Sophie from Paris. Before arrival, I was filled with French stereotypes. Will I understand her English if she speaks with a thick accent? Will she be an arrogant Parisian? However, all those were false. Roommates, like Anne-Sophie and I, formed a special bond over the five weeks.

“I always had someone I could talk to, and it became not only a college experience but a sibling experience,” said Anne-Sophie. “On days where I felt lonely there was always my roommate to literally come running to help me if I needed her, and on days where I felt inexplicable joy I had a guarantee of someone who I could share it with. You learn to work around things, and learn to deal with what you can’t. I love it all, even the fact that my roommate takes forever to turn off her alarm before getting out of bed.”

Outside of the dorms, Evanston was there to be explored. Living in a city on my own for the first time was a change from my suburban home in Western New York. Our newly found freedom allowed us to discover the city, head to the beach or enjoy the campus.

The curfew on weekdays was 10 p.m. and on weekends 11 p.m., which allowed ample time to take advantage of opportunities the city offered.

“Budgeting five weeks of food and living expenses was a big challenge for me as I found it hard to balance temptation with responsibility,” said Krish Lingala, 17, from New City. “The program helped me to understand how important it is to budget responsibly.”

“I became close with my professors, I became a writer and I became a well-rounded journalist,” said Ana. “This summer truly was the best summer of (my) life, and you can trust me on that. I was that skeptic who didn’t believe it would be when I saw ‘Welcome to the best summer of your life’ written across the pavement the first day.”

The message on the sidewalk held true. All the cherubs, past, present and future, share a special bond. We cringe at the thought of Rotating Rewrites, cry when we think of the last night, and laugh when we think of the memories we shared that really did make this summer the best.

For more information on the Medill-Northwestern Journalism Institute, visit medillcherubs.org.

Waverly Colville is a senior at Orchard Park High School.