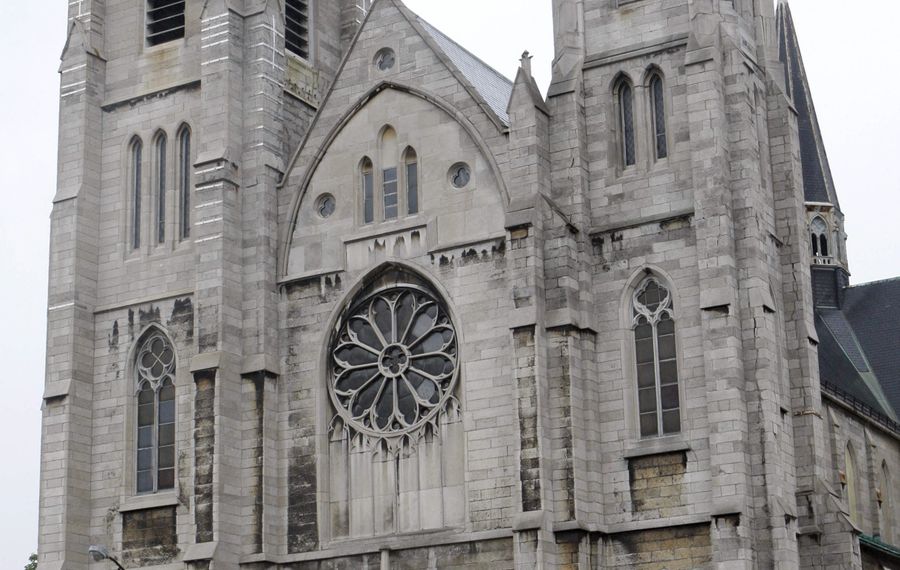 St. Ann Church and Shrine appears headed for landmark status over the objection of the Catholic Diocese of Buffalo.

Following a public hearing that lasted nearly an hour, during which about 40 St. Ann supporters filled Council Chambers, city lawmakers said they favored the landmark designation.

That designation would help protect the church, built in 1886 and located on the East Side at Broadway and Emslie Street, from demolition, and it could help a new developer obtain historic tax credits, preservationists said.

The Diocese of Buffalo opposes the designation because it could interfere with plans to reuse the site.

Common Council members typically defer to the district Council member on these types of votes, and Legislator Darius G. Pridgen, whose Ellicott District includes the church, said he supports the designation.

“We expect it to pass,” he said after Tuesday’s meeting.

Bishop Richard J. Malone has been clear that St. Ann’s days as a Catholic worship site are over.

And though the Common Council has no authority to say how the building can be used, or to influence the diocese, some speakers pleaded to return St. Ann’s to its place as a Catholic parish.

Others said the church represents a link to the Broadway-Fillmore neighborhood’s Eastern European history.

“It has carried our children through so many things,” said Colleen Walsh, a Williamsville resident and one of 17 people who spoke in favor of landmark status. “I really feel it’s an oasis in the city.”

Fillmore Council Member David A. Franczyk said he has never seen parishioners so enthusiastic to save their church.

Franczyk and Niagara Council Member David A. Rivera said they, too, would vote in favor of landmark designation.

As pictures of the church’s dramatic interior and exterior were shown on a projection screen, Preservation Board Chairman Paul McDonnell told lawmakers that the building’s condition is not as bad as was described in a report from the diocese.

The diocese has said it would cost $8 million to $12 million to repair and reconstruct.

Four diocesan representatives were the only speakers who urged the Council to vote against designating the church and shrine a local landmark.

According to the diocese, landmarking churches violates the First Amendment, though they could not cite case law to that effect Tuesday.

The diocese announced plans in August to demolish the church, but it is now working with Preservation Buffalo Niagara and other parties for potential reuse. It maintains that granting a landmark designation could hinder a reuse plan.

The St. Ann Revitalization Committee appealed to the Vatican when Malone announced plans to demolish the church. As the appeal is being considered, the diocese is prohibited from selling or razing the church.

A vote by the Council’s Legislation Committee was expected Tuesday, but the landmark designation, approved by the Preservation Board last week, wasn’t yet filed with the Council. A vote by the committee is expected in two weeks. If it’s approved, the item will go to the full Council for another vote Oct. 15.